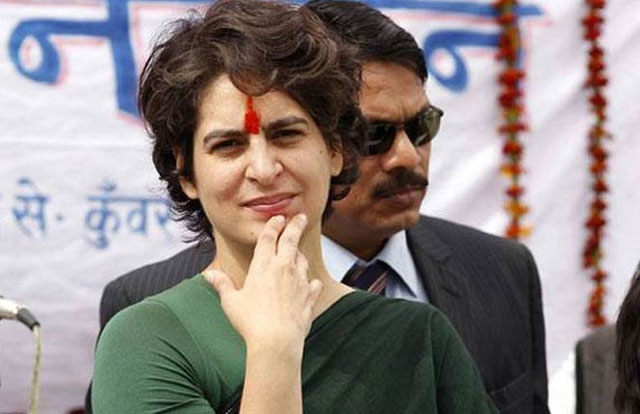 The month of February is here and we will see Priyanka Vadra being fully active in Indian politics. From long time she was behind the curtains and helped in her own capacity.

The news of Prinyanka Gandhi Vadra’s arrival in active politics has spread like fire and congress is celebrating it like a big achievement. Congress cadre has been given new lease of life.

Congress authority is making her Uttar Pradesh in-charge for 2019 election and hoping that she will revive congress’ 2009 performance. Congress has made a big bet on Priyanka and future of congress. If she succeeds in her assignment she will be on way to become the next Indira Gandhi. But on contrary if she fails it will be final nail in the coffin of congress.

Now as she has got involved directly into active politics, it will be interesting to see what contribution she is going to make in Indian politics and if she can lift a sinking congress’ ship.

Rahul Gandhi just completed 13 months as national president of congress but if we leave recent win in election of 3 state that is more of incidental win due to anti incumbency of previous government, most of the election he has lost to Bhartiya Janta Party.

Therefore political analyst says that Priyanka inclusion in active politics is a long term vision, it is not for 2019 election but this decision is made to secure congress future as there is no Gandhi left, who can ensure a win on his or her oratory skills or show leadership charisma.

Senior congress leaders know that in election 2019, they are nowhere compare to NDA and regional party prospect but to get benefits of Gandhi surname and keep congress alive, have to adopt and prepare new leaders who can take up Rahul Gandhi’s place. This is well thought strategies implemented by old guard of Congress, since Rahul’s charisma as an effective congress leader will be lost after this general election.

Probable scenario of 2019 election, where congress will be: In Southern India, there is no scope because of regional parties’ dominance. In Northern India, Bihar will have a direct fight between RJD and NDA, Uttarpradesh will have big fight between BSP/SP and NDA. The East India’s Bengal will be more of TMC, BJP and left parties than congress fight, Northeast fights belong to regional parties and BJP. In Western parts of India, in Maharashtra there will be show off between several parties, therefore congress stands merely a chance.

Lets talk about Uttar Pradesh where Priyanka has been appointed to uplift congress’ fortune. If we consider upper class vote, who dominates, after EWS bill passed by NDA, definitely these votes will go to BJP. Muslims, Yadav and Dalit votes will go to SP/BSP and other backwards vote will most probably going to BJP.

Therefore it’s big question to congress why they have appointed Priyanka to be a failure like her brother.

Rajasthan, Madhya Pradesh is the only state where congress has a direct fight with BJP. Punjab and Delhi again has several parties fighting for win, so it will be interesting to see how congress performs there.

What does this mean to opposition parties and what shape congress will take after this step? What is laying ahead for congress president Rahul Gandhi? Does other opposition fear Priyanka’s debut? Is this new entry because of Modi fear or a sheer ignorance by the recent Mahagathbandhan? The result of election will decide future of (less of) congress and (more of) Gandhi Parivar.