More
Home Opinions The only pain of opposition: Narendra Modi and his honesty
Opinions
Updated: 25 July 2018

The only pain of opposition: Narendra Modi and his honesty 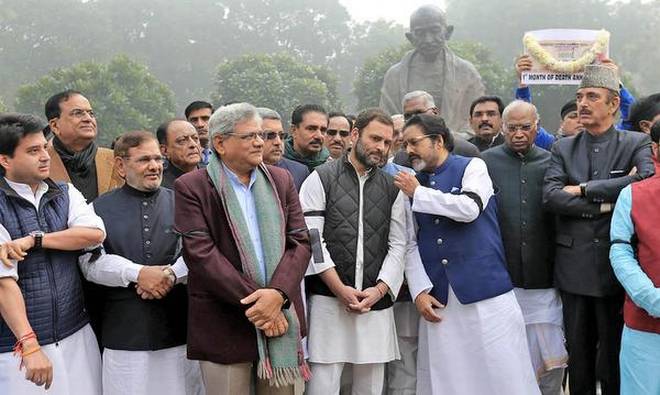 Politicians in India have always thought of themselves as above the ordinary citizen and lived like kings. Although their actual income has always been modest, somehow they managed expensive bungalows, numerous properties, cars, world tours and so on. Further, the most unfortunate part, they consistently maintained an austere facade in front of the voters humiliating the less privileged, more deserving and hardworking people on their faces without any compunction. Their kids, having achieved nothing in their life enjoyed extraordinary privileges; full of arrogance and treated not only the ordinary citizens of the country but the people at higher administrative posts like nobody.

The people who burnt their midnight oil, put in a dozen of hours every day for months to clear some entrance exam or evaluation or achieve what they dreamt of, lived in fear of the powerful i.e. the ones who had the political clout or political connections. The question is not if they were neck deep in corrupt practices or why they did not learn to become better human beings even after accumulating immense wealth even for the sake of their kids who turned out more disabled than them. The real question is why weren’t sufficient legitimate legal actions taken against them once they were not a part of the government. If the ruling party had carried out stringent legal actions against their predecessors who perpetrated unlawful acts, the country would have been at a lot better place than what it is at present. Maybe the reason for this torpidity of the ruling party was their involvement in the similar unlawful actions.

“People who live in glass houses do not hurl stones at others houses”.

But something has changed in the recent past. Many senior leaders from different parties are found running in an out of the courts.  Mr. P. Chidambaram, who I out of my ignorance once thought of as a nice guy has apparently done his PhD in “Scamology”, it looks as if he was a finance minister for executing Organised Scams. Lalu Prasad Yadav is struggling to stay out of the prison. Nothing seems to be working for him. He even ended up claiming that (his) state-run hospital does not offer sufficient facilities; reflecting his work during his tenure.

Mr. Arvind Kejriwal who debuted in a very peculiar fashion today has more number of defamation cases than the number of members in his core team. He even has a template to apologize in order to spare time for Dharnas and protests. The Gandhi scion is out on bail and so is his mother.

Akhilesh Yadav along with five other ex-chief ministers was stripped off their lavish bungalow. Mr. Yadav did not foresee this coming and was devastated at this event. He was heartbroken, felt betrayed and was unable to contain his emotions. It was the sense of helplessness that made him say things like: (these are the same officers who used to pick up cup plates etc. and some more). The way he damaged government property clearly shows that he was not at all prepared for this and would not let go of the bungalow at any cost.

His counterpart Mayawati Ji is also sailing in the same boat. Some weeks ago she had to clear all her electricity dues (more than a crore) after the power supply had been cut. I could imagine her emotional state which would be almost as Akhilesh’s. Although she did outsmart him when asked to vacate the bungalow, maybe because she did not inherit an empire, instead she built her own (good or bad is another topic).

The carefully nurtured and established political ecosystem has certainly been altered.  This is out of the syllabus for them, they have not once witnessed anything of this sort in their political career. It was straightforward, once a CM-MP-MLA always a CM-MP-MLA, you enjoy the luxuries your entire life.

After a very long time, a leader has earned the PM designation rather than getting it as a favor in return for something or as a gift. He worked his way from the lowest possible pedestal as a beginner to a “Pracharak” to the organizer of first ever “Rath Yatra” to a chief minister and later to a prime minister. He was awarded the designation because of his skills and achievements during his political journey of approx 45 years. You can dislike him howsoever much you like or disagree with his way of working or dislike his policies but you would admit that if Congress would have found even a tiny shred of malpractice on his part, they would have nipped him right then and there. Since he is still standing tall, it means he is clean or at least cleaner than them. He leads a government (with a full majority) and doesn’t owe anybody anything. He does not have to seek approvals of his friends before implementing difficult, hard-hitting decisions. Income Tax and CBI departments were not only to conduct raids on people other than politicians and top bureaucrats. Their purview included everyone. If these raids are unfair, illegal and tools to destroy then why were these being used for decades to harass the ordinary people? It is not only the politicians in opposition who are feeling the heat, the allies of the ruling party are also upset. What they had expected a hen laying golden eggs, a chance to print money and an opportunity to rise above others, turned out to be something else.

It is for the first time in India that politicians are being treated as common citizens of India.

It has always been taught, if you have done nothing wrong, then why worry? Turns out that those who preached that when had to fill in different shoes find it extremely difficult to withhold. Suddenly as they are treated as commons they have a lot to loose; hitherto they were apparently living a life of austerity. It is this fear of loosing  which is forcing them to come together and forge an alliance as they think this is the only way to survive. They know what they did over the years was illegal and sooner or later they will be exposed. This so-called “Mahagathbandhan” or grand alliance is nothing more than a cry for help. It does not matter if there are arch-rivals in the coalition, or if their ideologies (if exists) match or who becomes the prime minister. The lone goal at this point in time is to make sure that BJP under PM Modi’s leadership does not manage 272 seats. Even if 200 different parties manage 272 they would go with it. They know if the Modi & Party return to the power again in 2019, they might have to relocate to the prison, their illegally accumulated wealth could be confiscated by different means and worst their political career would be finished for good.

Although, we could do it again, but do the commons always do things that are in their best interests? Nevertheless, I am thoroughly enjoying the chaos in the lives of the nasty few who thought they own everything. I am loving it! At least once in our life, we got an opportunity to ask these pretentious politicians:

“Life of an ordinary man is difficult, isn’t it?”

Please visit Infinite Sea Of Opportunities  for more similar views and feel free to let me know your opinions about the same. Thank you for taking out time for reading this.