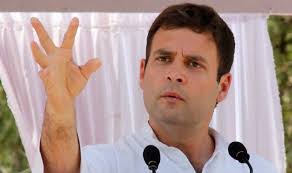 The Bermuda triangle analogy can be used to describe the congress party of today in several ways. Bermuda triangle is described as the region that is located in the western part of North Atlantic Ocean. Bermuda triangle is quite mysterious and is reported to have engulfed ships and flights that have gone near to quietly which no one knows how and why such mystery takes place.

Today the congress party is ruthlessly criticised and mocked by people of India because of the adamant determination of the party wish to encircle around one family and venerate the members of one family alone can save the party.

It is so sickening that most the congress men sermon around India that only Rahul Gandhi or his sister Mrs Vadra or the mother Sonia Gandhi alone can save the party and if the party president-ship is ever given to any outsider of the family, the party may disappear. The real truth is different and far from the one most congress men think or believe. It is the family that dispels and detracts people from congress party. The real Bermuda triangle of congress party is Rahul Gandhi, the great dynast of the party.

If we look at the hierarchical matrix of congress party today, we can easily find a triangular arrangement but the only difference is that congress party is in an equilateral triangle where all the three sides are of equal length.

Sonia Gandhi, her son dynast son Rahul Gandhi and her daughter Mrs. Vadra hold the triangular shape of the congress party. All the three of them alone are eligible to become the president of congress party and any one of them is acceptable to the party. Another beauty in the acceptance of any one from the family lays the economic principle of fungibility. Sonia Gandhi can be replaced by Rahul Gandhi and Rahul Gandhi can be replaced by Mrs Vadra and vice versa. But no one outside of the family has the right to occupy the position is the said rule in congress party.

The infamous reference of Savarkar by the dynast was highly relished and delish-ed by most congress men in the stage evokes only such possibility.

The real Bermuda triangle of the congress party is its prince who is waiting for his second coronation. Through regular utterances of nonsense, exposure of ignorance and inability, display of anger that he could not become prime minister of India, hatred for Modi because Modi gives no chance for corruption and nepotism, Rahul Gandhi is actually weakening the party. Further the alliance parties are also sceptical of congress party under its dynast who is nothing but a Bermuda triangle.