It is no exaggeration that Indian Prime Minister Narendra Modi is the one among the select band of leaders, probably a cherry picked few among Indian politicians in recent memory, who have been hounded by the main stream media (MSM), both print and electronic. In that sense, he shares a common experience and can empathize with President Donald Trump of the US. But their similarities probably end there.

The two leaders are upright public figures who take their responsibilities and public duties seriously. Both have been repeatedly pushed to the wall by the media. But their responses and how they handled MSM has been vastly different.

The all-powerful President of the US has often taken to social media– and particularly Twitter– to vent his anger against the media. He has gone so far as to brand them liars and peddlers of ‘fake’ news. His huge twitter following 32 million followers and counting- has keenly followed every minute of these exchanges.

But the Prime Minister Modi’s response to an offensive media, on the other hand, has been totally different. He has not publicly uttered angry remarks or expressed his frustration on twitter. Yet Modi’s stealth, yet killer media strategy seems to have sapped the very life out of the main stream media in India. This can be vouched by discerning insights gleaned over the last few years by piecing together publicly available data on declining readership/ viewership, as well as the prime-time space yielded to new players like Republic TV in the tough Indian television and entertainment market.

Ever since Modi came to the limelight as the Chief Minister of Gujarat state and started making waves, the media and his political opponents have been after him. In hindsight, they were probably the first to correctly identify him then as a future prime minister material and set in motion their game plan to stop him. Hence his hounding by the media and his political adversaries who often, worked hand in glove.

As a shrewd politician, Modi never had illusions about the role of the press. He had experienced first-hand how a press that was ‘friendly’ to his political opponents had almost destroyed his political career. But that was when they held complete sway on the media outlets and network infrastructure. On becoming the Prime Minister, he sought to marshal all available resources and deploy a clever strategy to gain a toe hold for his own view of the world. He embarked on one of the most comprehensive overhauls of the information dissemination machinery, rebuilding it from scratch, one brick at a time. 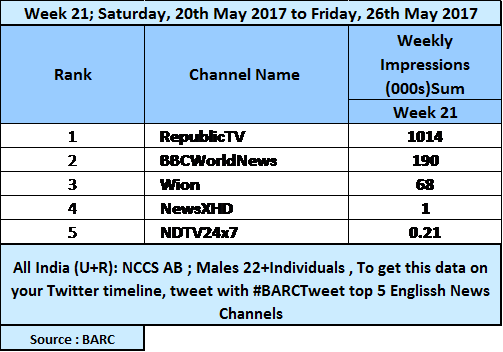 As with his anti-corruption drive, Modi relied heavily on technology. The range of tools he has used is mind boggling – from social media to mobile apps and everything in between.  But the real show stealer is his use of Twitter. With over 30 million followers, he has one of the biggest twitter followings in the world. Every tweet from the Prime Minister will reach an audience that is more than the combined weekly viewership of all major English news channels in India. See table below, courtesy Broadcast Audience Research council India (BARC). Most importantly, he is assured of a distortion free transmission to his target audience.

Modi has not simply stopped at building a huge following. He has engaged them creatively to sustain and retain this massive following. For example, there is a two-way flow of information as he often seeks to crowd-source ideas from them. Many have contributed topics and discussion items for Modi’s monthly radio broadcast program, Mann Ki Baat. His radio address is a runaway success particularly in rural India where large numbers gather to listen to him.

The biggest coup d’état of sorts is his use of YouTube. Videos of every public event addressed by Modi, his foreign travels, visits of dignitaries, election campaigns- all are posted to his YouTube channel. The Narendra Modi channel with over 650,000 subscribers is another huge captive viewer pool he has meticulously cultivated. This platform by itself has helped Modi take on the biased electronic media, obviating the need to commit time and resources to fight and fix distorted versions that the media in India has been dishing out for so long.

The Narendra Modi mobile app is equally powerful. With nearly 10 million downloads just of the android version, it delivers his messages directly to the mobile phone and tablets.

Modi’s personal familiarity and comfort level with information technology has been central to the evolution of this alternative media resource. In India’s political spectrum there are very few who can match or even come close. The Prime Minister’s media strategy reveals a shrewd awareness of the ingredients for success- India’s high tele-density (84%), high broadband subscription (192 million) as well as a huge younger ‘demographic dividend’ of the population. His personal political acumen knitted all this into a killer strategy that now dominates the discourse in India.

In totality, Modi has created an alternative media resource, a complete information dissemination platform and infrastructure, that has bypassed and even ignored the mainstream media. He has successfully retained the audience and slowly over the years has changed the narrative and now controls it. Modi successfully turned the tables on the media.

There are important lessons for both the media and politicians in a technology driven century. With new technological innovations popping up regularly that can disrupt existing business models or the way things ‘used to be done’, it is imperative to not take things for granted. A determined leader with a clear vision, riding on the back of disruptive technologies can usher in changes in any sphere of human endeavor- faster than many can imagine. And that could be a daunting challenge for the media. The media can no longer have a free run in pushing an agenda driven spin, for the hounded can now strike back. The spin doctors may have to pay the ultimate price of becoming irrelevant, as the Indian experience testifies. Therein lies a media lesson for President Donald Trump and other political leaders of the world.

All things considered by this ordinary citizen of the world; Calls a spade a spade.