More
Home Opinions Victory of Modi is victory of truth and good governance and defeat of negative...
Opinions
Updated: 24 May 2019 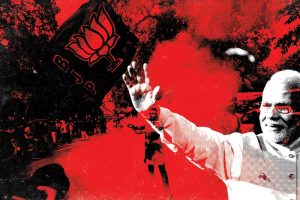 Time is up for all the divisive forces, negative forces, the gangs that are engaged in negative politics, gangs that were selling lies and falsehood must introspect and must turn towards development and progress of India. Instead of engaging in negative politics, they must submit themselves to the good and corruption free governance of Modi and must make India a super power under the leadership of Modi.

The Tukde Tukde gangs must recognize the truth that the victory of Modi is victory of India and victory for development and corruption free governance. By promoting the meaningless, meritless and un-teachable dynast would be like how Maricha was forced by Ravan to go to Sita in disguise as golden deer to divert Lord Ram from Sita so that Ravan can abduct Sita to Lanka.  Although Maricha did not agree to Ravan initially but finally did so for Ravan fearing the death and it is better to die at the hands of Lord Ram than by evil Ravan.

Every political party must realize the absolute truth that Indians are extremely angry with the corrupt, scam filled, misrule of UPA 1 and 2 and how one family has destroyed India since independence. Indians have witnessed, experienced and were party and partners in the good governance of Modi. India has developed and prospered marvelously in the last 5 years under Modi and India has surpassed all odds and achieved sab ka vikas and national security.

Regional politics must wane out and national awakening must take place with the ethos and philosophy of one India. People must abandon regional parties that refuse to join the mission of one India and instead they play with the emotions and sentiments of regionalism in a veiled separatist politics.

Thanks to millions and millions of people who voted for Modi, India is in the safe hands of Modi and BJP, although the states like Tamil Nadu has voted to defeat the development of the state by electing DMK.

The defeat of several so called prominent leaders of congress party and the family of HD Dev Gowda and Lalu Prasad Yadav clearly reveals the truth that India has grown beyond the imagination of all those dynastic parties and people are gaining wisdom under Modi’s rule so that fooling them anymore is not going to be that easy.

Defeat of the dynast in Amethi is not just a political defeat but it is the strong message of India to all those dynastic parties and naamdaars who play politics just with their family name and glory. Hereon such dynasts cannot take India for granted or can treat India as their family property.

The victory of Modi also sends a clear message that the cultural identity of India – Hinduism cannot be trampled or maligned for political benefit and minority appeasement is not going to work. National vision, philosophy of one India, patriotism, development, cultural integration with India’s ethos – Hinduism, divinity, honesty, sense of responsibility and accountability etc., the opposition parties must develop and promote.

It is always believed that strong opposition is necessary for healthy democracy. But good governance, governance free of corruption, nepotism and dynastic politics will automatically vanquish opposition and there is no need for any opposition in such situation is the truth Modi has proved through his victory.

Need for the hour is that people must wish long and health life for Modi while congratulating him so that Modi will continue as our dear Prime Minister for many more years to take India to glory and success.