As Jyotiraditya Scindia quits Congress, what’s the way out for the Congress? 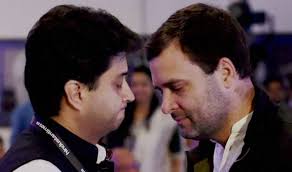 The recent exit of Jyotiraditya Scindia from the Indian National Congress(INC) demonstrates that the haughty attitude of the Congress leadership towards the people and even to their own leaders will be their nemesis. The retaining of leaders who have been extremely loyal to the top leadership of the Congress and the Nehru-Gandhi family and the sidelining of non-compliant leaders has accentuated the Congress’ problems.

After the Congress was washed out in the Lok Sabha polls of 2014, many Congress leaders and analysts feel that the Congress needed a new leadership that would be strong, not guided by self interests and extremely proactive in strengthening and reviving the party and taking on the BJP. Many critics pointed out that the Congress had weakened over the years, especially since Sonia Gandhi took over as Congress President in 1998. Her son, Rahul Gandhi rose through the party ranks very swiftly and became the Vice President of the Congress in a very short period of time, superseding many senior party leaders. Congress went to the polls in 2014 under the leadership of the Gandhis and their loyalists. The party was virtually controlled by them. This was unlike the time of Pandit Nehru and Indira Gandhi, who despite being strong leaders and obeying unquestioned obedience , managed to attract talent from outside the Congress as well as from within the party. This helped the party prosper. Unfortunately, this generation of the Congress could not do so. The few faces that it managed to attract from outside the party, like Dr. Montek Singh Ahluwalia and K Natwar Singh, IFS (Retd.) soon grew disillusioned with their leadership.

The Congress, however failed to find a new face as the top leader of the party. The entire party, with a few exceptions, agreed that only a Nehru- Gandhi family member could helm the party. The dominance of the Nehru- Gandhi family, their inability to innovate new methods of reaching out to the voters and the silence of the senior leaders of the party due to perpetual fear of offending them struck a heavy blow on the knee of the Congress. The Congress workers and legislators began to defect in huge numbers to other parties, whether the regional parties or the national parties. Congress, thus began to lose the polls at a rapid rate.

In December 2017, when Rahul Gandhi took over as Congress President, the party was full of enthusiasm as Mr. Gandhi had managed to build the image of a youth icon. Under his leadership, the Congress won a few polls, but these victories faded into insignificance when the UPA, with most parties accepting Mr. Gandhi as their leader and Prime Ministerial Candidate, was heavily defeated in the Lok Sabha polls of 2019. The Congress, however, improved its position and from 44 seats, its Lok Sabha strength increased to 52 seats.

Coming to the State Legislative Assembly polls of 2018, the Congress managed to win the polls in Madhya Pradesh, Rajasthan and Chattisgarh. The Congress did not have much problem in forming the government in Chattisgarh as there was hardly any question raised on the appointment of Bhupesh Baghel as the Chief Minister of Chattisgarh. However, in Madhya Pradesh and Rajasthan, the younger leaders- Sachin Pilot and Jyotiraditya Scindia wanted the Chief Ministerial posts or a Cabinet Ministerial post at least. However, the writ of the Congress top leadership and that of their loyalists- Ashok Gehlot and Kamal Nath prevailed, who ultimately became the CMs of Rajasthan and Madhya Pradesh, respectively. A compromise was sought for Mr. Pilot when he was given the posts of the Deputy Chief Minister of Rajasthan and the President of Rajasthan Pradesh Congress Committee(RPCC). However, Mr. Scindia was not given any post in the new state government and was asked to continue being the Lok Sabha MP from Guna.

After his defeat in the Lok Sabha polls of 2019, Mr. Scindia was appointed as the AICC In-Charge of Eastern Uttar Pradesh. However, he resigned from the post a few months later. For some time, speculation was rife whether he would really quit the Congress, particularly after he removed the words ‘Member of Parliament from Guna(2002-2019)’ from his Twitter biography. So, it his resignation from the Congress and his entry in the BJP a few days ago was not entirely shocking or unexpected.

The Congress clearly needs to change its management style. It must reorient its cadre. One of the fatal consequences of the exit of strong leaders like Mr. Scindia and Mr. Ashok Tanwar is their replacement by hardliners, who are making the party very aggressive and rough on the media, the bureaucrats, students and vulnerable groups of the society. A system of conflict resolution should be brought in by the Congress to resolve any dispute among party leaders. The party should not bring any extremist element within the party and strengthen the moderates, strategic and intellectual elements in the party. The Congress should conduct party polls on a regular basis, wherein the workers will get to elect their leader. Such steps alone can pave the rebirth of the Congress and enable it to be a brilliant Opposition.

Sauro Dasgupta is pursuing his bachelor’s degree in Political Science with a specialization in International Relations at Jadavpur University, Kolkata, India. He is interested in reading, writing, public speaking and his writings have been published in many important magazines, journals and newspapers.