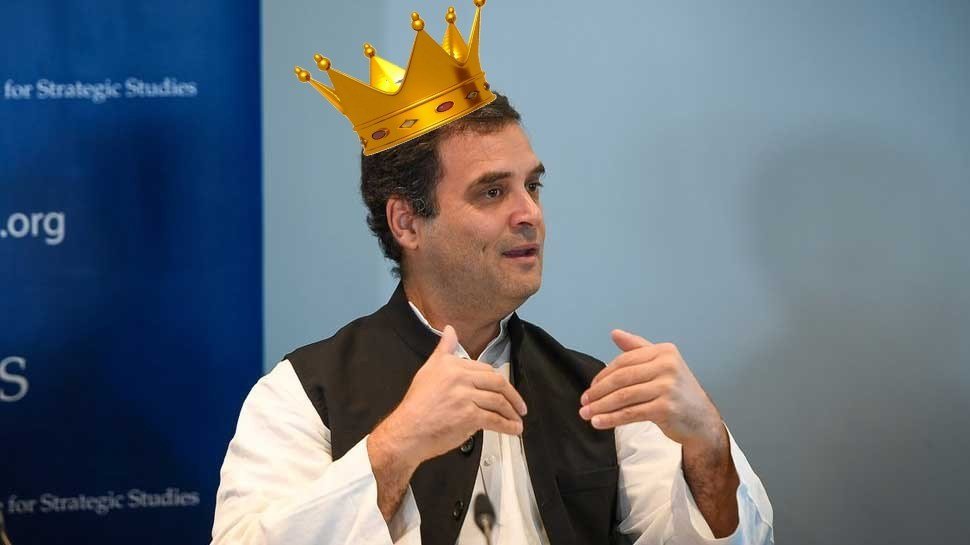 In Merchant of Venice, Shakespeare has described the pain and agony of Portia over marrying the Prince of Aragon if he ever choses the right cascade. The reason being, Prince of Aragon speaks a lot about his horse than about anything else. The above were the true expressions of Portia about Prince Aragon being shared to her maid servant– Nerrisa.

What we see today in congress party is nothing but the prince of Aragon disease. The only difference is instead the obsession of the prince of Aragon over his horse; the congress men express and exhibit competitively their obsession over the family and dynasty culture. For all those un-winnable, post-retired leaders of congress party, only the dynast must lead the party even if such an arrangement ruins the party because only when the dynast is in the helm of affairs and the dynast remains imbecile, the oldies will have great importance and relevance for the self.

But for the young leaders (below 60 years), who are otherwise self-made in the congress party, wants an inspiring leader to lead the party. The young leaders are divided into two separate, immiscible blocks; one being the dynasts of the oldies (example, P Chidambaram and his son Karti Chidambaram) and others who are self-made.

The young leaders who came to power due to the advantage of their dynasty would naturally want only the dynast Raghul Gandhi to head the party and want the saga of dynasty politics to continue whereas those hard-working, self-made young congress leaders, the expectation is quite different.

But the voice and number of oldies and their dynastic children is quite high than the voice of hard working, self-made leaders in congress party. Therefore no one is there to understand or listen to the desire and expectations of the real and authentic congress men. The congress workers, sympathisers and followers are also with the real congress men and not with those oldies or their dynastic children. Otherwise congress party would have shrunk so dramatically.

Unfortunately even after the repeated defeats, the congress party does not want to treat its ‘prince of Aragon disease’ and still wants only the family to head the party. If the party continues to worship and venerate one family and without the family the party may perish, the party would soon end up as party of ‘gentlemen of leisure’.

The young and aspiring congress leaders and sympathizers must realize that they owe a lot to the nation and not to one family and hence must quit congress party and join the luminous leadership of PM Modi. Instead of exhibiting patriotism for Sonia Gandhi, Mrs Vadra and Raghul Gandhi, congress men should respect and follow the patriotism of Modi and must support India than the family.

The recent stand of congress party especially that of former Prime Minister of India, Dr. Manmohan Singh in declining the invitation of Honourable President of India to join the dinner hosted to the vising President of US, Donald Trump because Sonia Gandhi has not been invited looks very ridiculous. Sonia Gandhi is only the working president of the congress party and is nothing beyond that. The dinner hosted by the President of India was an apolitical event therefore politicians cannot be accommodated for such an event but the invitation for Manmohan Singh was in the capacity of he being the former Prime Minister of India.

India is bigger than Sonia Gandhi, Raghul Gandhi, Mrs Vadra or congress party. Congress party must realize that it is duty bound to India and not to one family that too so openly. But no one is there in congress party without prince of Aragon disease and hence they would repeat and recite only praises for the family. We do not know how many times Manmohan Singh would have told foreign dignities and other high profile visitors in the past that he was only a figure head PM and the real PM was Sonia Gandhi. We have to derive such possibility only because of the immature, ugly stand taken by the congress party to decline the invite of President of India.

Congress can be saved only if congress party liberates itself from Mother-Son, if not the daughter clutch. The oldies must be kept in the drawing room of congress party office like margadarshak or indoor potted plants and young leaders must take over the party.