Amidst rabble rousing, Arif Muhammad Khan is making his voice heard in Kerala 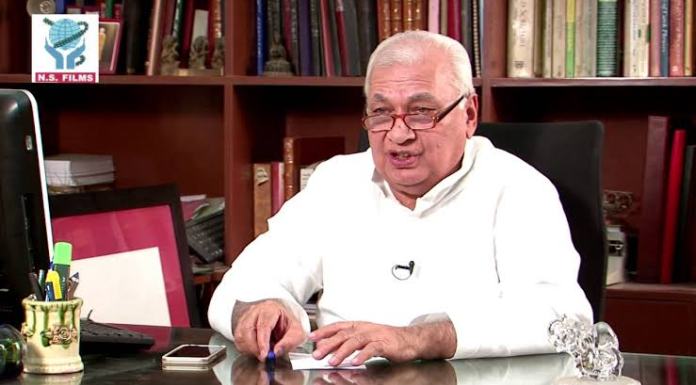 The media outlets in Kerala are not all left-oriented, but they do have immense hatred for BJP, if not more.

An erudite scholar and former union minister under the Rajiv Gandhi tenure, Shri Arif Muhammad Khan was appointed as the governor of Kerala in September and since then he has been tickling the nerves of the entrenched communist party of Kerala for some reason or the other.

The 80th edition of the Indian history congress had Gov Arif Muhammad Khan to inaugurate the event which was held in the city of Kannur which is by far a communist bastion. Arif Muhammad Khan known for his extempore public speaking was seen noting down certain points made by KK Rajesh, a communist MP from Kerala as he spoke inadvertently about the atrocities faced by the minorities in wake of the CAA implemented by the MODI government.

Followed by Rajesh came noted historian Irfan Habib, who addressed the gathering and raised a few questions which were directed at the governor. Habib spoke for nearly 1 hour after which the governor came to address the gathering.

While patiently replying to the questions raised by Habib, the crowd turned amok when the governor mentioned Maulana Abdul Kalam Azad. Things took a new low when Habib suffered a meltdown and charged towards the governor keeping aside his school of thought. Governor’s ADC and security officer prevented further encroachment from Habib, while Habib was seen shouting at the governor that he should mention Godse, not Azad.

The conundrum among the crowds when the governor was addressing was by no way fortuitous as they were seen holding placards and, interestingly many were from JNU and AMU. A well-played game.

HOW THE MEDIA RESPONDED

The topic surrounding the prime time debate for almost all media channels had the aforementioned vehemency occurred at the Indian history congress. Shockingly their topic of debate was not to mention the preaching of conduct from a top dignitary like Irfan Habib, but it was to check whether the ‘governor worked according to the constitution or not’.

There is a series of notions among the media outlets down south as they often place BJP as a laughing stock. Any sort of a slip of the tongue or mistake from a BJP spokesperson or anyone affiliated with the Sangh Parivar is being celebrated and posted on the social media platform by the official media page itself. To create the further buzz they will add up a caustic /sarcastic headline which no other party gets access to.

A recent debate in a Jamaat-e-Islami sponsored channel in Kerala, a BJP spokesperson asked the anchor whether he condemns the act of Irfan Habib violating the protocol or not to which he vaguely responded and tried to move astray the topic out of contention. The Anchor then lately pointed the statement made by the governor: “those who tried to heckle me were the Muslims from JNU and AMU”. The anchor then stressed the word ‘Muslims’ to invoke a tone of his acerbic rant to his fellow panel members.

In a completely different instance from another TV channel, a supreme court lawyer who is seen recently in TV interviews and is quite infamous for her rabid and bilious rants made another of her calumnious statement quoted out probably from WhatsApp university which stated: For the freedom fighters of India the imprints of the British boots will be on their breast, while for the Sangh the boot imprints is found out from their tongues. Expectedly the anchor made no attempt to stop the slanderous comment and no one in the panel came to counter, even the BJP spokesperson.

When the BJP spokesperson was awarded his turn, he wasted no time in giving her the reply from the same coin as he said, “If Savarkar had the imprints of the British boots in his tongue after spending 11 years in the Andamans, just imagine where all would have the tongues of Nehru and AKG( communist veteran) traveled if they were allowed mercy from the British after spending just one year in jail”.

What ensued afterward was the anchor pointing down fingers and shouting at the BJP spoke person to take back the comments and apologize. Interestingly one should take into account that before anyone it was the anchor who expressed her dissent following the statement made by the BJP panel member.

Even though not going with the defense given by the BJP spokesperson, there is indeed a serious misconception and hatred among the media which they serve down to their viewers regarding anything which matters with BJP.

FOR THE SAVIOURS OF THE CONSTITUTION

Arif Muhammad Khan recently dismissed the resolution put forward by the Kerala assembly against CAA as he stated CAA as a purely a central subject while the state has got no legal validity to oppose the same. This evoked sharp criticism for all ends of both communist and congress party as they were seemly unhappy with his statement and quoted him for working alike a state BJP president.

The death commemoration of veteran Congress leader K Karunakaran had Mr Khan’s name in the list which was taken aback after the serious of criticism surging around him. If one would turn back the history pages to refer the camaraderie the two shared, they’ll for sure apprehend the animosity they are running into.

In a recent interview with the former editor of India Today, currently the senior editor of Asianet news  M J Radhakrishnan, Khan said that he openly supported the CAA which was a promise made by Mahatma Gandhi to provide citizenship for the minorities in Pakistan. He also made a point that no act of intolerance can shut him down as he is well-bounded with the constitution and it was indeed his duty to clear the air surrounding CAA or else it’s better to resign and rest at home.

Khan also left an open debate on CAA and urged those ones who are sternly opposing to participate as it will only do good for the confused Muslims in Kerala who all have been subjected to fear-mongering from the left and the congress.

For the saviors of the constitution, while wasting time by heckling and conducting riots in the streets, please do acknowledge the open challenge from the governor and show your dissent in the most constitutional way. Raj Bhavan awaits you!