In recently concluded assembly elections, Congress has won all the three states of Rajasthan, Madhya Pradesh and Chhattisgarh. However, it lost in two states of Telangana and Mizoram, its last bastion in North East. Much has already been written about the performance of Congress and BJP across all the states. But there is a need for more detailed analysis before the conclusions in the state of Rajasthan, Madhya Pradesh and Chhattisgarh are arrived at. 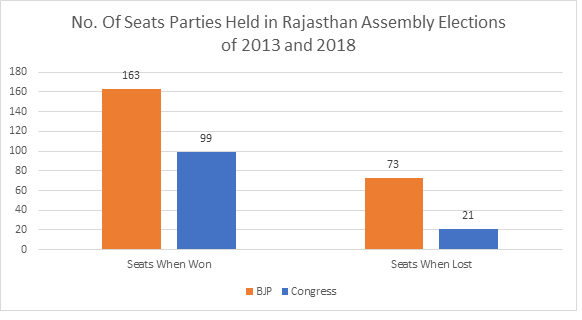 1. In a state like Rajasthan which alternatively votes for Congress and BJP every 5 years, BJP even though lost in 2018 has won 73 seats, 52 seats more than what was won by Congress in 2013 when it lost the election. This suggests the popularity of work done by the Raje government in the state. This also proves the ‘Modi Factor’ as his last-minute rallies turned the tide in favour of BJP to the extent that it could reach a respectable tally.

2. The seat difference between both parties is about 26 in 2018 elections as BJP got 73 seats and Congress 99. This does not match the difference in voting percentage for both parties as both of them have got almost similar votes of 38% as shown in the table above. This suggests that people of Rajasthan voted equally for both the parties. But the difference in numbers of seats won shows the very small winning margin in many seats. This is quite possible for an incumbent government going for polls.

3. Local Congress leaders have tried fanning the issues like Anand Pal Singh Encounter, Padmawat which caused discontentment among Rajputs against BJP. They also tried raising the issue of Reservations of JAT community which form a major chunk of the electoral population of the state. But this didn’t help them. The hotbed of Jat Community in Rajasthan is Bharatpur seat which voted Ajit Singh’s Rashtriya Lok Dal to power there.

4. In fact, this, on the contrary, shows that BJP didn’t lose big because there was less anger among people towards the BJP policies. Rather, it appears that BJP wasn’t able to project its policies and their achievements properly to the people. 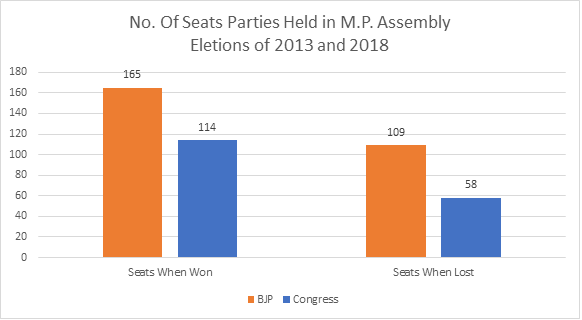 1. In a state like Madhya Pradesh which had a BJP chief minister going for polls after 15 years of rule, it is hardly a win for Congress as It could merely get 5 seats more than him. BJP got 109 seats whereas Congress got 114 seats.

2. Ironically for Congress Party President Rahul Gandhi, BJP got more votes than Congress in M.P. as seen in the vote percentage of both the parties. (See the table above)

3. BJP Chief Minister Shivraj Singh Chauhan’ policies and development work can be seen on ground zero throughout his tenure. Last time in 2013, when he won after 10 years of rule, he got 107 seats more than Congress. Even this time in 2018, he got more votes (41%) than Congress (40.9%). Thus, BJP lost not due to lack of development but despite the development.

4. NOTA Voting Percentage also looks to have played some role in Madhya Pradesh. Many traditional voters of BJP have pressed NOTA because it had some discontentment due to SC/ST Amendment Act and BJP’s apathy to the upper-class community. It didn’t vote for BJP but it didn’t choose the Congress either. But, this ultimately helped Congress only.

5. Interestingly, the false narrative of Agrarian distress as painted by Rahul Gandhi fell flat in Mandsaur where BJP won 7 out of 8 seats here. Thus, Congress may have won numerically, but it could not fool the voters in M.P., neither It could defeat Shivraj Singh Chauhan in the way it should have after 15 years of anti-incumbency. 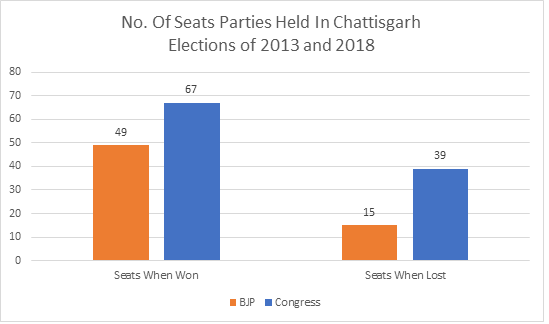 1. The most surprising results for BJP are in the state of Chhattisgarh where it had as popular a leader as Chief Minister Raman Singh who has transformed the state in 15 years. The capital of the state Naya Raipur is a model worth replicating in the country.

2. In the state of Chhattisgarh, Congress can claim some achievements but not for the rallies of Rahul Gandhi. But there are other reasons for it.

3. Voter Fatigue which played a role to some extent in Madhya Pradesh played a large role in Chhattisgarh as Raman Singh, BJP Chief Ministerial candidate was going for polls after 15 years of his rule, similar to a situation in M.P.

4. The biggest factor that looks to have turned the tide here is Rahul Gandhi’s promise to waive the farmer’s loans within 10 days of coming to government. Reportedly, after this promise, farmers stopped paying the instalments of their loans.

5. Tribal areas of Chhattisgarh couldn’t be mobilised by BJP despite many development schemes of Modi government like Jagdalpur airport in Bastar region and speedy implementation of FRA Act 2006 by Raman Singh Government.

6. In Chhattisgarh, Voter fatigue and more focus of BJP on industrial development than rural-agrarian economy looks to have produced these results.

The results of assembly elections may give a fresh lease of life to Congress President Rahul Gandhi. But they may be very delusional too, as explained above, BJP has not lost because of lack of development but despite the development across all three states. There were strong factors like anti-incumbency, voter fatigue and NOTA vote percentage along with some local issues as highlighted above which helped Congress win the elections in these three states. But these factors may not play the same role in upcoming Lok Sabha Elections of 2019 when People of India will vote to elect the Prime Minister of India.

Death of the farmer vote bank

While in the case of a farmer the reform delivered double benefit but the political class faces double whammy, that of losing its captive vote bank that was dependent on its sops and secondly losing the massive income they earned as middlemen between the farmer and the consumer. Either the farmer is misinformed or wrongly instigated, otherwise it is impossible to conceive that any farmer should be actually unhappy or opposed for being given more choices, as to whom to sell their produce.
Read more
Satire

This a satire news article, which 'reports' that the government has added 280 character essays to the educational curriculum in an attempt to train students to use Twitter in the future. Note: I have chosen an image of a school from your media library and added the twitter logo on top of it.
Read more
Hindi

Hinduism is a complex, inclusive, liberal, tolerant, open and multi-faceted socio-spiritual system of India called “Dharma”. Due to its innumerable divergences, Hinduism has no concept of ‘Apostasy’.
Read more

But do we really know the significance of this temple and the story behind the incomplete idols of Lord Jagannath, Lord Balabhadra and Maa Shubhadra?
Read more
Hindi

Avrodh: the web-series that looks more realistic and closer to the truth!

The web-series isn't about the one Major who lead the attack, its actually about the strike and the events that lead to it, Major was a part of a big picture like others who fought alongside him, the snipers, the national security advisor so on and so forth.
Read more