The humble sages, by virtue of true knowledge, see a learned brahmana, a cow, an elephant, a dog and a dog-eater  with equal vision.
–Bhagavad Gita 5.18

If protein is all that matters then dog meat has served as the nutritional needs of the terribly downtrodden since the times of the Gita. 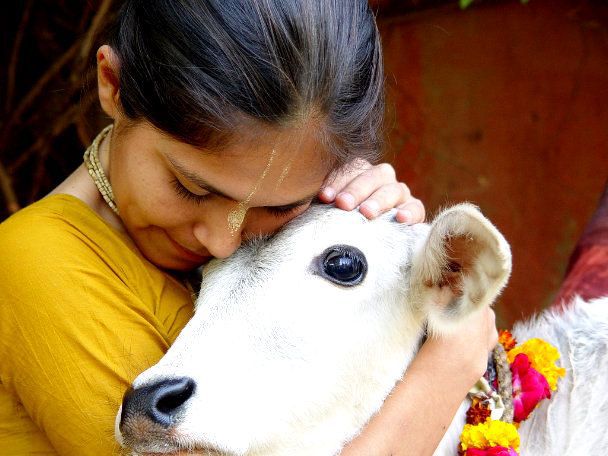 A woman embracing a garlanded cow

Just as some human relations are classified as near and dear, animals too have a hierarchy in the eyes of humans based on their relative utility. For example, the cow and bull were extremely useful and were the backbone of a pre-modern agrarian society; they were accorded the highest importance in our society to the extent that killing of cow is seen as sin. Against such a background, one wonders how the cow that was subject to reverence and worship since times unknown has now become a slaughter-able animal. Any argument or sentiment against such slaughter is painted as a communalism.

It has long been argued by the so-called liberals that cow is like any animal fit for human consumption and treating it as mother is mere superstition. While from a biology point of view it may not make a difference, they conveniently ignore the fact that our entire agrarian economy was once powered by the cow family- with cows giving milk and the bulls tilling the soil. It is only in a country like India, one finds expressions like Ksheera Sagara (ocean of milk), Dadhi Sagara, Navaneeta loka (world of butter) etc., referring to the abundance of milk and milk products that the country has been able to produce since times unknown. Desert hordes can only dream of flowing streams of water even in their highest heavens. Cow is intertwined with our lore and tradition. It is but a matter of common sense that an animal of such an importance should not be killed.

In contrast, the dog has never occupied a great place in Indian society. The relative importance of dogs to our society is very minimal. Also, it is seen as an unclean animal. In its natural habitat, dogs eat their own excreta and vomit while cows don’t. The canine is only worshiped in its terrible form as Kalabhairava, an aspect of Shiva. This is attributable to the overarching Vedantic philosophy that propounds no one is unworthy of worship as God is in all- is all.

New studies indicate that cows and farm animals are far more intelligent than popularly perceived. Research found that dairy cows could follow sound through a maze in order to find food, suggesting heightened executive function and decision-making abilities. The cows that were studied also showed remarkable emotional sensitivity and were deeply affected by emotional and physical pain of early separation from their mothers and dehorning, which changed the brain in a way that led to a negative cognitive bias akin to pessimism. 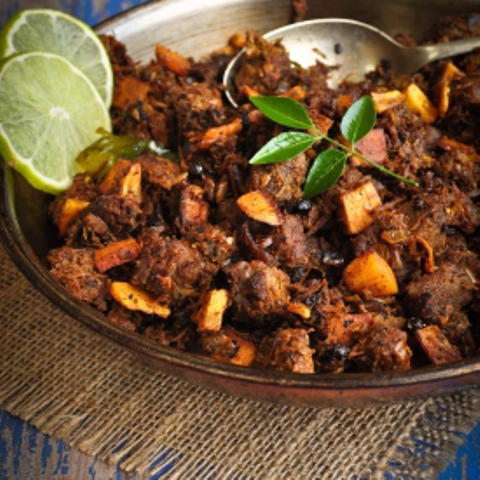 Empirical evidence shows that domesticated cows develop deep attachment to their owners, often displaying signs of distress including a serious drop in appetite when their masters are away for long periods. The loyalty aspect that the modern society attributes to dogs has been denied to cows for the simple reason that it will be morally wrong to kill something that is as loyal and loving.

Our traditional experience has been denied and our sentiments of treating cows as family members has been rubbished by a culture that hardly understands sustainable farming and cattle rearing. Some hundred years ago, it would be almost impossible to find a household without domesticated cows. Now that is not just a reality but we have banished our cows to the mercy of cruel dairy farms and slaughter houses.

In return, we have taken the animal of our oppressors, the canines that they imported from Europe. In many native cultures, the dog is seen as offensive animal. When George Foreman, arrived in Zaire to fight Mohammad Ali at the famous ‘Rumble in the Jungle’ fight, the locals were deeply offended by the German Shepherd that he brought along with him. The German Shepherd reminded them of the Dutch who used their dogs to hound the locals. The animal doesn’t fare well even in common idiom of India. The famous Sumati Satakam (anthology of 100 poems) in Telugu talks about a dog’s character of going back to its old ways even when it is crowned on throne in the following poem. A woman embracing a pet dog

Times have changed, we have been brainwashed, insulted, coaxed in to believing that cows are just meant to be eaten. The households that once had at least one cow and that would not wait for an opportunity to buy or donate a cow are now ridden with animals like dogs and cats.

In the wake of proper implementation of illegal slaughterhouse ban in the UP, the prices of other meats have reportedly gone up making it difficult for poor people to access necessary protein. While long term measures to provide cheap nutrient rich food for the masses need to be taken care, the Govt. must consider introducing new meats into the market that are cheap, nutritious and are readily available.

Those who fiercely argue that cows cannot be mothers of human beings are probably right. Just add to it that if cows are not mothers of humans then neither are dogs friends to humans; therefore fit of human consumption. Stray dogs are widely and readily available and can be slaughtered without additional investments in slaughterhouses. In addition, research in to dog breeding for human consumption as an industry must be conducted to identify the best and the most productive breeds.

As Justice Markandey Katju argues, it is just a superstition to treat any animal as a relative/friend of human beings. We should explore all possible animals that can be consumed by humans. A quick look at this Wikipedia page gives an idea of the cultures that traditionally eat or have recently acquired taste for dog meat. In some parts of India and many part of the world dog meat is a delicacy. About 25 million dogs are killed each year for human consumption. A simple back of the envelope calculation suggests that breeding dogs for human consumption will lead to lesser carbon emissions as compared to rearing cattle for meat. Scientific studies in this matter must be conducted to either confirm or reject this observation.

Dog meat might sound outlandish. However, it is only a matter of developing a taste for it. If not, how come beef becomes a delicacy which is served in restaurants across India while it was a taboo a few decades ago? Moreover, from the sloka stated above it is clear that dog meat is the staple food of underprivileged classes of our society. Those who claim to be working for the upliftment of the underprivileged sections of society must actively promote dog meat which has for centuries served as their everyday food. 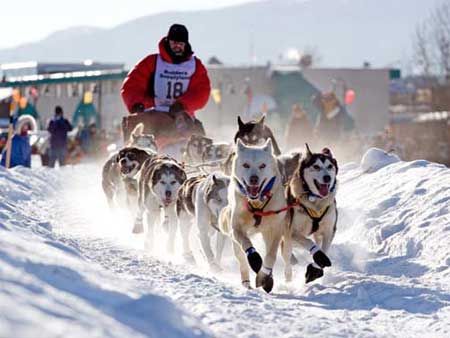 Draught power of sled dogs on display. Norwegian explorer Roald Amundsen was known to have eaten sled dogs during his expedition to the South Pole.

In addition, the sheer number of dog breeds at our disposal allows for rich culinary variety. Unlike farm animals, dogs can be bred in-house like garden cucumber allowing the possibility of having unadulterated non-industrial meat. If dogs are to be avoided for religious reasons by certain communities, alternative sources of protein for such communities should be explored. While camel meat may be impractical, cat meat is not impossible; certain insects are certainly nutritious and sustainable, as per new research. Progressive and scientific minded individuals must counter the propaganda of animal rights activists and pet lovers who will jump in to the fray to protect these so called best friends of man by educating the masses about the nutritional, economic and anti-superstitious value these new meats have and promote diversity of consumable proteins.

All discourses demeaning the livelihood and culture of those minorities in India and outside India that have survived on dog and other non-conventional meats for centuries must end once for all and they should accorded an equal and dignified status in the society where they can proudly eat their food without fear of ridicule and social alienation from predominantly western acquired prejudices.

A post-modern society should be able to question before embracing culture reversals (from bovine-centric to canine-centric or vice-versa) with utmost scientific zeal leaving no space for superstition of any kind.