COVID- 19 and the Indian economy 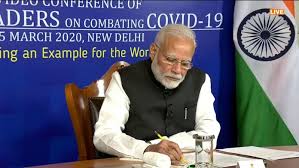 The 21-day war against COVID – 19 has just begun and will be fought by “WE THE PEOPLE OF INDIA!”. While our doctors and scientists are striving hard to make the antidote and defeat this pandemic, social distancing is the only remedy as of now. The nation is under lockdown, offices closed, factories shut down, and thus a big-blow to the already struggling economy. Though there were speculations that a financial emergency might be declared under article 360. This can’t be regarded as a rumour because the Reserve Bank of India has already made a war room to analyse the falling numbers which are happening for the first time in the history of India.

Within 15 trading sessions, our foreign investors pulled out 1.08 lakh crores. The unemployment rate was already at the peak when companies had to allow work from home, some sent their staff on unpaid leaves while some handed over the termination letters too! The biggest fear in the mind being the disease should not reach the poor and the lower middle class which would be then impossible to control. In so much of hullabaloo, let’s analyse those steps that our finance minister must take immediately to get the economy on track!

The relationship between per capita GDP and COVID2019 related mortality rates across countries is positive and significant. It is clear that we need to develop an alternative understanding of this phenomenon – for poor countries.

The lockdown and this pandemic will teach us a lot! As rightly quoted by the PM, that this fight is bigger than Mahabharat which lasted for only 18 days. It’s time that we all stay at home, stick to the rules and regulations, and be patient. The whole world expects us to fight this virus with intelligence and better actions.