More
Home Opinions Article 370 and 35A revoked and some rumors spreading like wildfire
Opinions
Updated: 9 August 2019

Article 370 and 35A revoked and some rumors spreading like wildfire 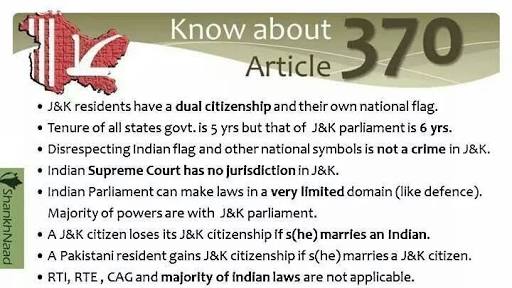 On 5th August 2019, history was rewritten in bold letters as the Home Minister Hon. Sh. Amit Shah announced that Article 370 and 35A will be revoked and two new Union Territories to be created by separating Ladakh from Jammu & Kashmir and both of them to become separate UTs. While the news spread like wildfire thanks to social media, there was widespread joy all around. In a matter of hours it was clear that the people were happy with the Government and status updates and memes had started doing the rounds. No doubt, it required a lot of courage by the Centre and was a a brave step towards making it finally a ONE NATION.

However, the silent spectators soon became vocal as most found it misuse of democracy or unconstitutional. They found refuge in screaming how democracy had died and fascism was on the roll and one gentleman went onto warn his brethren of TN, AP and Kerela about their dark times ahead.

In a democracy which runs according to constitution the irony was lost on the dissenters that they were enjoying freedom of expression, a constitutional right. So why was this screaming going on about fascism? And demonising the PM was also being done more than freely.

However, the purpose here is to clear the misconceptions and fear.

First fact : Constitutionally the Government is well within its rights to do what it seeks to.

Prior recommendation of President is NOT needed in introducing the constitution amendment bills.

A constitution amendment bill must pass in both the houses separately by absolute + special majority {absolute → more than 50% of strength; special → 2/3 of present and voting}.

If there is a disagreement between the two houses on a constitution amendment bill, there is NO provision of joint sitting to resolve the deadlock.

The bills which result in some changes in the constitution but passed by simple majority are not deemed to be Constitution Amendments.

Once the bill is passed in both houses, the bill is sent to president for approval. The 24th Amendment Act of 1971 had made it obligatory for the President to give his assent to a constitutional Amendment Bill. Thus, for a Constitution amendment bill, a President can neither withhold his assent not return the bill for reconsideration.

Bills which result in changes but not deemed to be Constitution Amendment Bills.”

The extract of above clearly shows that there is a well defined process and it is being followed. This is NOT arbitrary in its nature.

So the charge of undemocratic procedures and dictatorship is not supported by facts.

Also an important fact , the Father of the Constitution, Dr. B.R Ambedkar was NOT in favour of Article 370.

Second Fact: The local Kashmiris fed on false propaganda since decades are apprehensive of their uncertain future. They take India to be a monster ready to gobble up their land and displace them.

While their fears and beliefs are unfounded, one must realise that their thought process cannot change in a day. A single minded and concerted effort will be required by the Central Government to make sure that the local population feels safe and secure first and immediate measures of economic and social infrastructure progress should be taken.

It is a tough road ahead to integrate the Kashmiris happily with the rest of the country. Tough and difficult yes, but definitely not impossible. Years of fear mongering will take some time to be washed off.

Integration is not just a word here. Its an ethos and the Government has to be patient , people have to be patient and above all the media has to behave responsibly and dignity.
A proper blue print is needed and I am certain it must be in place because its a step by step process to win the hearts and minds of the people living there. For them we are tbe enemy and that is a myth which for them has become the ultimate truth.

Third: While I do get the angst of the people who dissent with the Government and they are free to say so but kindly refrain from spreading lies, hate mongering, fear evoking updates on your twitter/FB accounts and journalism by dailies should definitely play their role in the state reconstruction and rebuilding process.

Rabble rousing has to stop. Why try to instigate the Southern states, religions and castes. Article 370 and 35A do not target any caste, creed or religion. There is no seizure of land from people living there. All it seeks to do is to provide them with same rights as the rest of India enjoys. RTI can be raised. Assembly for 5 years now instead of 6. Land by any Indian can be purchased. It will eventually benefit the economy as land prices will surge.

It is not the time to obstruct but to construct.

It is not the time to go overboard and expect miracles. It needs to be fast track yes, but steady too. And result oriented schemes.

It is the time to be fastidious and patient as we celebrate the Independence Day with a sense of honour,a patriotic spirit and above all a huge sense of responsibility.

This is just the beginning and we have promises to keep so each one of us has to travel miles before we sleep! Mr Modi has kept his word but the more difficult steps lie ahead.Its a time to bring a state till now being treated as an adopted child, to become a member of this enormously large family India.