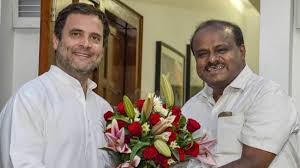 The situation of congress party in Karnataka has become like that of Bhasmasura.

Bhasmasura was a great Siva Bhakta like the dynast of the congress party as he also made such claim during state elections in Rajasthan, Madhya Pradesh some months ago.

After several years of penance, the Asura got a boon from Lord Siva that if he touches the head of anyone would immediately turns to ashes. With that power, the Bhasmasura become arrogant and wicked. Finally the Lord Vishnu appeared in the form of a beautiful lady-Mohini, made the Asura to follow several dance steps and finally tricked the asura to touch own head and then turns to ashes.

Karnataka people elected BJP to power in the last state election. But the congress party played a foul politics and made JDS Kumarasamy as chief minister by extending support to him thinking that such an alliance would help congress to be in power as well can keep BJP away from power. But the political treachery and butchery people’s mandate by congress party had demoralized the winning prospects of the party not only in Karnataka but in entire India.

The real winner of congress folly is JDS and the real loser is the congress party. Today congress party is in a state of fix, cannot withdraw support nor could continue its support to JDS. JDS has already started to play victim politics, exposed the congress party how it has offered its support and not allowing JDS to govern the state. Congress on the other hand is totally helpless as it does not want JDS to run the government and gain some reputation and at the same time does not want to pull down the government as well.

The state of Karnataka is the real sufferer of the dirty politics of the congress party. The only way the state can save itself is by eliminating JDS and congress from the state and people must elect BJP with massive majority for another three terms like how people of Gujarat had elected BJP in the state and how wise Indians elected Narendra Modi with landslide majority for the second term.

Only if people eliminate congress party from Karnataka politics, the state can progress and prosper otherwise the state has to endure the butchery of democracy and consecration of rule of corruption, dynastic politics, nepotism and finally the state is being pushed backward to repent and regret for several years.

The pain and swelling in the mouth of congress party is difficult to treat as the party could not either swallow or spit out the pain. The price for dirty politics started by the congress party takes its bill also from the party. When a party butcher democracy and mandate of people in day light and prevent BJP government, the natural choice and wish of people of the state to form government and rule the state, definitely a brute punishment to such daylight butchery is sure. The last parliamentary election result has clearly shown that people of Karnataka are going to be harsh with congress party.

People of Karnataka have to be very assertive, decisive and firm in eliminating congress – JDS alliance from Karnataka politics.

Only when people started to punish all corrupt political parties and tukde tukde gangs in Indian politics and repeatedly elect corruption and scam free government of BJP and PM Modi, we can ensure India becomes a great land to live. Corruption and scams are really pushing India backward. Prime Minister Modi has built India brick by brick and has taken the country to a new trajectory of growth and sab ka vikas. People of India must pledge their unconditional support to PM Modi to fulfill the vision of New India and sab ka vikas. Let us allow congress party of the dynast to play continuously the same old dirty politics and ruin itself.