He is the real PERIYAR of Tamil Nadu- ‘Madurai Vaidyanatha Iyer’ 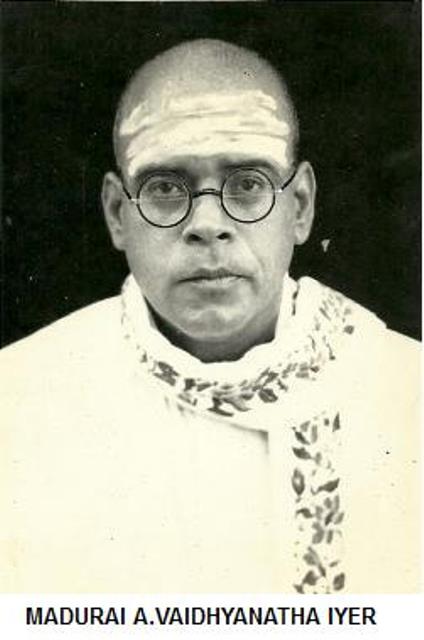 The anti-Brahmin, anti-Hindu, anti-God, anti-Hindi political force and its successors must learn certain historic facts of Tamil Nadu in order to understand the real contributions of late A. Vaidyanatha Iyer, popularly called as Madurai Vaidyanatha Iyer, who really deserves the title ‘PERIYAR’ (the great man) in Tamil Nadu politics.

Against caste discrimination and temple entry for all communities especially the Dalits, Vaidyanatha Iyer not only fought but also ensured equal right and dignity for all communities and achieved Dalit entry into Meenakshi temple in Madurai. Further the mission initiated by Vaidyanatha Iyer was made as law in the state by another great leader called Rajaji who was the then Chief Minister of Tamil Nadu.

Vaidyanatha Iyer was born in Thanjavur in the then Madras Presidency in 1890. Later he joined Indian independence movement in 1922, participated in non-cooperation movement, Vedaranyan Salt Satyagraha and quit India movement. Vaidyanatha Iyer became the president of Tamil Nadu Harijan Seva Sangh and fought for the entry of Harijans in Temple and on July 8, 1939 Vaidyanatha Iyer entered the Meenakshi Tample at Madurai along with LN Gopalasamy and six of his Dalit friends P Kakkan, Muruganandam, Chinniah, Purnalingam and Muthu.

Pasumpon Muthuramalingam Thevar stood as iron wall to the reformist movement of Vaidyanatha Iyer. Subsequently the then Chief Minister, C Rajagopalachari in 1939 passed ‘The Temple Entry Authorization and Indemnity Act that removes restrictions to Shanars and Dalits from entering temples.

Commemorating the contributions of Vaidyanatha Iyer, the Government of India on December 9, 1999 released a postage stamp in his name.

Subsequent to Madurai Meenakashi temple entry, many other temple entries also happened in Tamil Nadu such as Azhar temple, Thiruparankundram, Thiruvarangam, Pazhani and Srivilliputhur, in 1939.

The initiatives of Vaidyanatha Iyer for the entry of Dalits in Meenakshi temple was the first step towards the abolishing untouchability in Tamil Nadu.

Vaidyanatha Iyer or Rajaji never played caste politics in Tamil Nadu nor the Brahmin community ever had used the names of the above two great leaders to play caste politics.

But the Dravidian party that came to power through the politics of negativity, anti-Hindu, anti-God, anti-Hindi and anti-Brahmin sentiments not only disfigured the Tamil identity with Dravidian tag to cover own Telugu origin, also portrayed Brahmins as the most heinous community and isolated the community as Aryan race.

The DMK virually did nothing for Dalits, despite DMK having ruled the state for several decades and the ranks of DMK were predominantly dominated by those intermediate castes like Mudaliar, Vanniyar etc.

EV Ramasamy Naicker is projected as the real crusader of social justice and he has been conferred with the title ‘Periyar’.

But the real PERIYAR who inaugurated the reforms in the state and paving way for the entry of Dalits in temple was by Madurai A. Vaidyanatha Iyer, a Brahmin. But EV Ramasamy Naicker never ever acknowledged the best side of Brahmins but always spitted hatred against Brahmins and infused inferiority complex and negativism among people.

On the contrary, Vaidyanatha Iyer defied his community, got excommunicated from the community, endured abuses and criticism and achieved temple entry for Dalits in 1939.  Another great leader who equally shares the title – PERIYAR is C Rajagopalachari, the then Chief Minister of Tamil Nadu who brought a law to permit temple entry for all.

The Dravidian politics cleverly, not only masquerade own non-Tamil identity with the help of Dravidian tag but also masquerade the real contributions of Brahmins to the state of Tamil Nadu, towards the development and industrialization, enactment of law against untouchability, fought for the rights of Dalits to enter into temples etc.

Hope the present generation will peel off the pseudo-Tamil mask of the Dravidian brand politics, defeat dynastic political culture and bring the agenda of development and sab ka vikas initiated by the Prime Minister Narendra Modi.

Next to Kamaraj, MGR and Amma took several initiatives to end caste systems in Tamil Nadu and re-invoked the values of God, Hinduism and the ethos of one India. EPS and OPS are trying their best to fulfill the dreams of Amma and MGR and thankfully the government at the centre headed by the PM Modi is doing its best to develop the state.

Hope the people of Tamil Nadu will support the new chemistry of AIADMK+ BJP alliance to save the state from the negative brand politics and politics of hatred that is emerging now in the state.