One of the biggest challenges that journalism is tackling today is the overreaching hysteria surrounding ‘clicks’.

Clicks represent the popularity of a story and the interest that information generates. These clicks have become the central point around which online stories are ‘made’ ignoring the limitations of such click-baiting. Popularity must not be the basis of journalism as it promotes baits and lowers the level of the discourse. It may even not be a true indicator of genuine interest in story as pages are opened by Users on varying considerations. Sometimes the absurdity of the story, its irregularities or the propensity and possibility to troll it is the overriding factor for the clicks. Tweets from J. Katju, opinion pieces from Rana Ayyub, political comments by Amartya Sen could be considered as examples.

This brings me to my story regarding how these tendencies of the MSM brush off on the small players in the media industry. Different Court/Tribunals in the country, have the power to designate lawyers with a requisite amount of practice as ‘Seniors’ or ‘Senior Advocates’. This is considered a high honour and has been done, like every selection in the legal profession, on the basis of undefined and highly subjective criteria in absolute secrecy. Being designated as a Senior Counsel by the Supreme Court is one of the highest honour that an advocate can strive for and results in numerous social, professional and monetary benefits to such an advocate.

A couple of months back, the former Additional Solicitor General during the UPA II regime, Indira Jaising, filed a petition in the Supreme Court alleging nepotism in the non-transparent and arbitrary method of designating senior counsel by the Supreme Court. While the petition may or may not seem fair to people, Jaising raises certain very important points pointing to the lack of transparency and the number of Senior Advocates being less than 100 making legal services unaffordable.

Maybe due to her political inclinations, she cited instances of nepotism alleging discrimination on the basis of region, castes and minorities even though it is irrational and self-defeating mainly due to the fact that nepotism, by definition, is done on the basis of personal relationships and often breaches caste, religious and political boundaries. Also, these allegations are a statistical farce considering that there have been only 30 appointments in total which is too small a number for the it to be expected to be a representative of the ethno-religious composition of the country, or of the practicing lawyers in the Supreme Court. Further, such allegations simply result in tokenism and lobbies further weakening the rational, merit based, transparent criterion. To be fair, I assume the crux of Indira Jaising’s petition was:

There are 2 major legal news reporting websites in India. BarAndBench and LegallyIndia. While BarAndBench had this headline to the news,

LegallyIndia, in it typically sensationalist, biased, conceptually shallow, and legally uninformed style, ran the same news with this headline

This is the shameless and nauseating reality of journalists of these portals masquerading as beacons of neutrality and fairness.Apart from dealing with allegations of highly biased reportage regarding certain Law Schools, Legally India is an expert in publishing random anonymous unverified articles by disgruntled students on Law Schools till they serve LegallyIndia’s agenda.

Further, the ludicrous system of Mooting Premier League (LoL) reinforces the unfair coverage of the allegedly “top” Moot Courts within the country. Service Law jurisprudence and common sense mandates that in case of appointments for top posts, seniority and merit must be the determining criteria even when there is reservation in Govt. services. But I guess it is juvenile to assume that LegallyIndia is aware of the laws of the country considering their tweets. Apart from not knowing the law, it seems like they are unaware of the basics of journalism as well. Avid Twitter followers pointed out that the headline represents the article and the petition in the wrong light.

It was explained the nepotism and discrimination on the basis of caste/religion are two different things and that the petition represents more depth on larger issues of nepotism and transparency more rather than being a rant against ‘saffron nuts’ and caste-ists.

Then LegallyIndia said something that would baffle the regular reader the most.

Legally India replied by alleging that judges of the Supreme Court of India are so shallow that discriminatory towards particular classes due to their religion or their caste since the judges are not from those castes or minorities. Mind you, I’m not expert on Contempt of Court, but I’m sure this hinges on the borders of it.

Then LegallyIndia argued that how something is broken in the system and that the Dalit and the Muslim angle was necessary to mention. It was pointed out that such information is co-relative and not causative as the headline and editor’s attitude towards it makes it out to be. The inclusion of objective criterion and more transparency should result in fairer process but it may not result in more Muslims or Dalit or more representation from Backward States or Rural backgrounds or lobby-less States.

It is funny how abuse on SM became an issue in India for ‘liberals’ only after John Oliver talked it as it suddenly became the ‘in thing’. Trolling and abuse doesn’t come only from Modi/BJP fans but is a larger issue touching interesting notes in the jurisprudential debate between right to privacy, right to expression and freedom in the cyber space. Personally, I believe ignoring is the best solution (and I should have) as the lobbying by similar liberals/politicians on similar issues was what prompted the 66A law, which was celebrated by these ‘champions of liberalism’ when it was enacted.

Anyways, this always works out perfectly for people arguing against ‘right-wingers’. Hurl allegations of Muslim hatred and just scoot. Doesn’t matter as it completely disregards a person’s logic and his arguments, as he/she is proved to be a bigot beyond doubt. Note that none of the tweets ever gave them any right to say anything close to such an obnoxious allegation but LegallyIndia still did it. This was done not just to question my ideology, which has no bearing on this legal issue, but to disregard my point and ridiculing it to the extent of making it irrelevant.

The ridicule did not end there on twitter, as a lot of people did target Kian, the handler/editor of LegallyIndia, on their website. In the comments section, he casually again refers to our Twitter duel and makes a self defeating point: 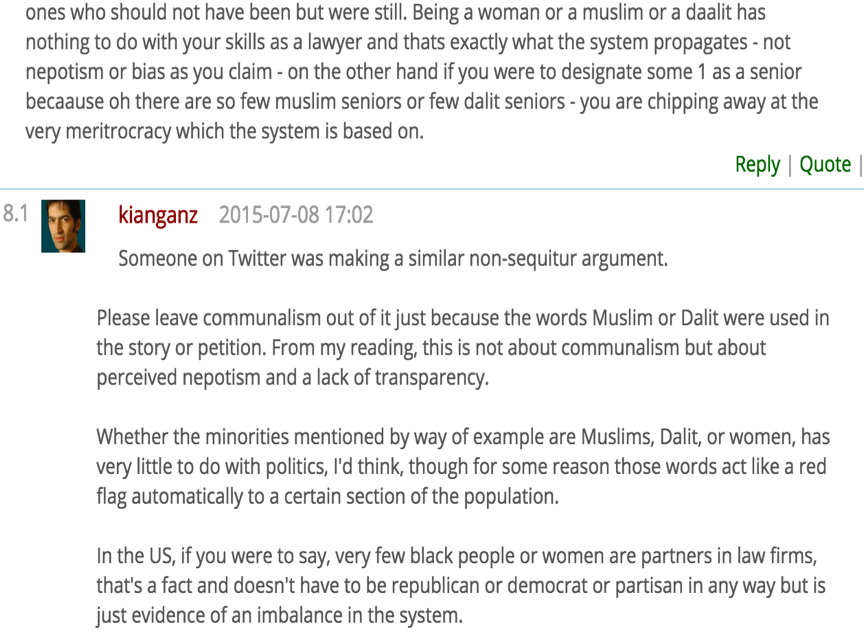 Rather than giving some fashionable secular phoney rhetoric, which completely negates the rational merit based criterion in designations, if Kian would have done some research, he would’ve known how nepotism shadows designations. What Kian fails to see is that no one will see beyond the communalism because the headline is irrational. If he wanted people to see the nepotism and non-transparency, he shouldn’t have made such a headline. Please let rational objective merit decide such matters. Non-sequitur back to you, Mr. Kian. (Note: Kian, don’t ever say that to a lawyer in the US, you’ll be laughed out of the room.)

In hindsight, I’m sorry for taking the bait. Clearly they know nothing about the law, about journalism or about basic decency. I’m not saying sorry to LegallyIndia, but I’m saying sorry to myself as I know my time could have been used better had I ignored it.