More
Home Reports Arvind Kejriwal - A crusader against corruption to a punching bag
Reports
Updated: 6 May 2019

Arvind Kejriwal – A crusader against corruption to a punching bag 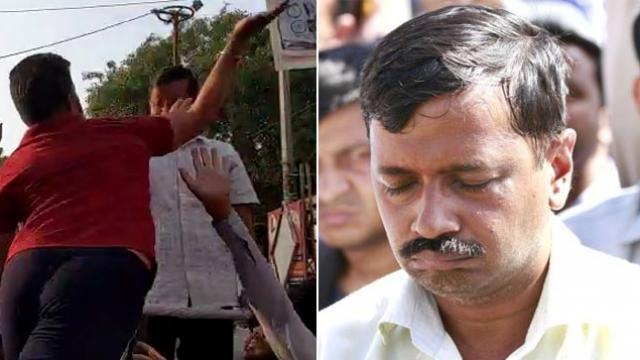 The entire political situation during 2012-13 brought a new face in Indian politics by the name Arvind Kejriwal, an ex-bureaucrat who was seen as honest and capable of bringing a genuine change in the system. He became the face of fight against corruption, a crusader against corruption.

Those who had access to the corridors where political games are played were privy to the reality of this crusader but the man on the street was taken away by the emotions that the man was generating. Such was the effect on the common man of Delhi that they almost gave a majority to a party that was formed just a few months back!

However, what followed after, broke the hopes of many of the people who genuinely believed in the man and his vision. The entire drama on Lokpal, Dharna politics, resigning from CM post in just 49 days to fight from Varanasi against BJP Prime Ministerial candidate Narendra Modi. All this was enough for many to see through the man.

But as it turned out Delhi people still had a lot of belief in him. They gave him a historic majority of 67 out of 70 seats in 2015. This, despite the fact that Narendra Modi; who had won a historic full majority in General elections after 30 years and was on a high of a series of victories in multiple assembly elections; campaigned extensively in Delhi for his party. His party got reduced to just 3 seats, such was the wave for Arvind Kejriwal. Delhi citizens clearly wanted to see him come good on his promises and show his administrative capabilities.

More than 4 years have passed since then and is the right time to judge a government and its leader on its performance. If, for a moment, we set aside the kind of cheap politics he has made normal in last 5 years, so much so that he inspired Rahul Gandhi to play similar politics (Rahul Gandhi started playing the politics of shoot-and-scoot and lies after Arvind Kejriwal won the massive majority in Delhi by playing the same politics). His performance as a chief minister has been so utterly disappointing that instead of taking Delhi forward, after the huge strides taken during Sheila Dixit’s tenure, he has put the brakes on its growth and development.

Despite his boastful lies, the performance in areas like pollution, traffic, economy, education, health, infrastructure, social schemes, and others, which all are state subjects under his government, speaks for itself. He can make all the hue and cry about his brilliant performance in education and health sectors, but the public is buying none of it. Citizens of Delhi had given him a message by electing an incompetent BJP once again in Municipal elections despite their bad performance but he refused to listen.

Forget about the promises he had made regarding free wi-fi, swaraj, mohalla clinics, and others; even the basic administration is lacking in Delhi today. It seems like the entire city is running on an auto-pilot mode with no one running the affairs. The much maligned Delhi Police which comes under Central Government has done an okay job in last 4-5 years to make city safer and certainly done a fabulous job compared to Mr. Arvind Kejriwal. Although a lot more is desired.

His own insecurities and the performance of his once opponent Narendra Modi, has brought forth the true face of the man and all his dirty politics is out in the open.

People had invested emotionally into this man. Common citizens, irrespective of the age, gender and other considerations, saw a hope in this man. Their hopes have been shattered. Their trust has been broken. They feel betrayed and angry.

Every now and then, we hear news of him being beaten up or being humiliated in public or private space. Whether it is the news of Ink attack, Chili attack, attack by his own MLAs, or the repeat of slap attack recently in a roadshow; the man has been on the receiving end of this anger among the common public for some time.

One should never play with the emotions of a common man. People can forgive unfulfilled promises or bad performance or even corruption, but the betrayal of their trust is an unforgivable sin.

People of Delhi gave him a complete majority, much bigger than people of India gave to Narendra Modi. But while Narendra Modi enhanced his stature and goodwill many fold; Arvind Kejriwal squandered the opportunity and became a punching bag for the public, whose trust he betrayed.

Congress; whenever they are under the pump on corruption issue; has this habit of propping up ex-bureaucrats with relatively clean personal image but either have no spine like Dr. Manmohan Singh or have no integrity or ability like Mr. Arvind Kejriwal.

With the recent drama on AAP-Congress alliance, Kejriwal shed the last shred of mask that he had been wearing all this time and exposed what he is truly is – another inefficient and incompetent bureaucrat propped up by the Congress ecosystem to keep their establishment going. But this time, even the ecosystem has distanced itself from him and that is where his desperation is becoming apparent.

The journey of a man from a crusader against corruption to a lonely punching bag deserted by his own masters and followers, is a lesson for all in politics.