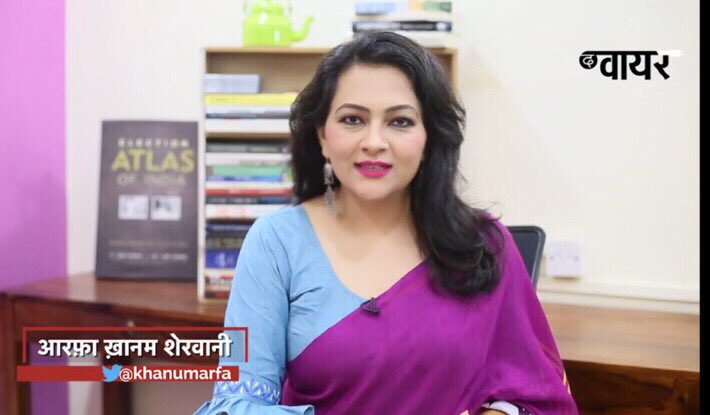 There has been a war of words going on, on Twitter about the spirited ‘Bharat Mata Ki Jai (BMKJ)’ could be chanted within the hall of holy Parliament in the constitutionally secular Indian republic. It was questioned by a liberal journalist in the Liberal world to have arguments within their own fraternity and also on the outside. One woman editor of the most liberal news online portal that makes fervent appeal to its readers always to support the paper for its ‘great journalism’ by contribution in the form of money (not for ideas, opinions and write-ups, for, they themselves are the creators of their own stuff).

Arfa Khanum Sherwani @khanumarfa ‘senior’ Editor @the wire _in, Ex @rajyasabhatv @NDTV @satyamev Jayate #AMU Alumnus, Robert Bosch Media Ambassador to Germany, a Nehruvian with all these positions and tags as add-ons irresponsibly tweeted on 29th of December thus:
“ It is not a question of my religion but the religion of the state. The Constitution says India is a secular democratic republic. Why is it okay to chant ‘Bharat Mata Ki Jai’ in Parliament ? Why it goes without any scrutiny from even the liberal India is my worry as a patriotic Indian?”

@khanumarfa questioned liberal Indians (read the liberal Press and liberal journalists) to take up the issue that worries a Muslim like her, who is again according her own accord ‘patriotic’, to stand by her in not allowing Bharat Mata Ki Jai in the Parliament. All the liberal journalists have been in a fix. How to take up this challenge of a worrying woman senior editor who alone cannot combat her goal of banning the slogan and is seeking the fraternity’s support. They have no qualms of taking up all and sundry issues of Muslims. But this particular issue is a tricky one. If taken up, they themselves would be damned and thrashed. Liberal journalists have got the cheek to ask any leader to speak on any subject they raise. In this case most of them, Rajdeep, Sagarika, Shobha De kind snubbed the issue. For, they might have discussed in their club or pub if it’s worthy to promote. But on this they backed out. Otherwise, they are all duty bound to raise voice even on the most trivial issues connected to minorities.

Vir Sanghvi on the same day mildly queried her in his tweet:
“If your religion forbids you from accepting the notion of Bharatmata or singing Vandemataram, that’s fine. It’s your right in a secular country to reject that. But why pass judgment on those who believe in the idea of a motherland? And to call them communal devalues the term“ etc.

@khanumarfa didn’t relent, she continuously argued in her tweets that it was “communal”. Kavitha Krishnan, a passionate communist immediately jumped into the field and joined hands with @khanumarfa to tweet Bharat Mata Ki Jai to be communal. The renowned recipient of recent British award-journalist, Swathi Chaturvedi @bainjal could not keep quiet when such a raging battle of tweets are going on,on her pet project of baiting Sanghis! She was quick to jump her gun to silence fellow liberals specially the nosy Kavitha by tweeting that she didn’t want Sangh to occupy so much mind space.

In the entire saga on the Twitter about @khanumarfa is much ado about nothing. Being a senior editor @khanumarfa should know that the affairs of a secular republic (barring France) do not purely go by syntax but go by the spirit of the Constitution. Barack Hussein Obama of USA took oath of his Presidency on the Bible (though his middle name is Hussein). Even America is a large secular republic! It goes without saying, the majorities will always have their say in any country. That was precisely the reason why the Constitution of India has given special rights to minorities. You as a minority got your due.

It’s not good to raise impertinent questions. Already the majority community is aggrieved in the country for the special benefits and privileges like religious personal laws given to minorities by depriving them of theirs. If @khanumarfa is true to salt to this country she should let go things as they are in some cases. Bharat Mata Ki Jai intensifies and more vocally raised if she and her ilk question. Jai Bharat Mata Ki Jai.