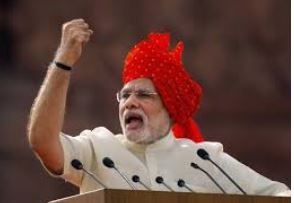 Some may oppose, criticize and even attempt to persecute the messenger for drawing similarity of working style of PM Modi with the life-lessons given by Lord Krishna. But we will see how this comparison is genuine. This is not about conveying a spiritual message but about the Karma – the duties of Modiji as Honourable Prime Minister of India. The comparison is therefore strictly in physical parenthesis and not in metaphorical sense.

Krishna always represents wisdom, commitment, clarity, duty consciousness, upliftment of the society and justice without looking or measuring the reward or returns. The role of Modiji as our PM is also acted as true Karma Yogi and was working hard to develop India without expecting any political dividend or mileage.

Our famous epic Granth ‘Mahabharat’ clearly shows that how the (mighty in numbers) Kaurava brothers were attempting reinstate the law of satan, demon and sacrilege the basic ethics and moral values. After Pandavas lost the game of dice to the infamous cheat- Sakuni, Duryodhana and Dushasana made attempt to disrobe Panchali the wife of Pandavas in Kaurava Durbar.

The helpless Panchali surrendered to Lord Krishna who came and rescued Panchali from the most heinous act of Kaurava.

Our mother India was like Panchali crying for long and the Indians were like helpless Pandavas witnessing the sorrow of our Bharat Mata until 2014. Those who ruled India in the past can be compared to Kauravas as most of those political parties that ruled India were looting money from the public exchequer and were engaged in scams and kickbacks and in fact were disrobing our mother India. The citizens were exactly as helpless as Pandavas.

Like Panchali, India also cried for help from heaven and that is how the spiritual saint, Karma Yogi- Modiji appeared in the scene and saved mother India from going nude and naked (stealing all her wealth) by several dynasts who can be compared to Kauravas.

Every mission that Modiji accomplished for rebuilding New India were futuristic, impartial and free of any scams, politics or nepotism. What India is today is due to and because of Modiji who not only defeated the Kaurava culture but also saved the glory and respect of mother India.

Like how Lord Krishna who made India from a land of organic humans to the sacred Karma Bhoomi of human consciousness, Modiji also brought a new thinking among Indians.  It is all about development, Sab ka vikas, transformation and not politics of power, politics to loot money and politics to promote dynastic culture.

Therefore comparing the actions of Modiji with that of Lord Krishna would be more appropriate. Modiji saved India from Kauravas and Modiji kindled the spirit and ethos of Indian-ness, one India and development of all.

Like Lord Krishna how he imparted the essence of Bhagavat Gita to Arjuna in the midst of Kurushetra battle field, Modiji is also working constantly to make Indians to be more responsible about Swacch Bharat and be dutiful for the nation.

Today India is not facing a mere political struggle but a freedom struggle. Those who ruled the county for nearly 3 decades are flexing their muscle and throwing money and their dynastic cult to recapture the power and reinstate Kaurava rule. But people of India must take part in this great freedom struggle and must trust and must pledge their support unconditionally to Modiji like how Panchali trusted Lord Krishna during disrobement by Dushasana in Kaurava Darbar.

India need a Karma Yogi Modiji, a persona committed so deeply to the ethos of development of India and sab ka vikas.

2019 is not about vote for Modiji or elect Modiji again as our PM, BUT SAVE INDIA BY RE-ELECTING MODIJI and not those divisive forces that are interested only in developing their dynasty and loot the country.