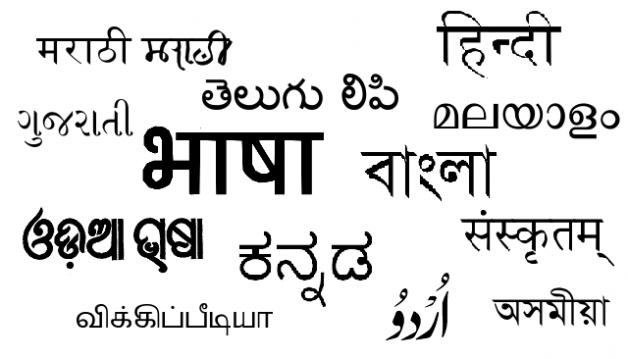 With the rise of English medium education, a lot of intellectuals on both the left and the right, worry about the extinction of Indian languages. It is indeed true that students learn best in their mother-tongue during the primary years. At the same time, it is also true that the ability to pick up a new language like English, is highest in their junior school years. And for good or bad, better or for worse, English-medium education makes a person far more employable in India.

Left-wing intellectuals advocate that the medium of instruction should be in the mother tongue during the primary school years. This experiment was tried out with disastrous results in West Bengal. Right-wing intellectuals worry about a generation disconnected from their ethos and culture. While there is no denying to the threat to Indian languages, one must be careful to take a pragmatic approach while dealing with this problem. Heavy handed coercion based techniques such as amending the constitution to impose the mother-tongue during primary years are never a good solution. Such suggestions blatantly disregard the right of parents to be able to make decisions which they think are in the best interest of their children.

You have to ensure that no school runs its primary classes in English medium, otherwise you will observe a Goa like situation as described by Reality Check India. When there are two groups of schools, one running English medium classes and another running classes in the mother tongue, people rush to the English medium schools for admitting their kids, hence the schools imparting classes in mother tongue don’t survive. Unlike a country like Japan or France, where one language is dominant, you now have to ensure that only the mother tongue (language of the state) is used and not Hindi. This is specially problematic when you think of children of those in transferable jobs in the private sector or Central government. So enforcing the mother tongue is not really possible without an undemocratic, coercion based approach. Minority schools will always get an exemption to use English as the medium.

And assuming a hypothetical scenario where the vernacular language is indeed enforced, it is extremely likely that affluent folk will send their kids for private coaching in English. Or perhaps, teach it at home themselves. This kind of a scenario will only exacerbate the divide between the poor and the well-to-do students. With greater fluency in English at the end of schooling, the latter is likely to have a distinct edge in the job market.

At the same time, there is a different kind of coercion at work, which implicitly creates an apartheid favouring English. Premier institutes like IIT, IIM and AIIMS are English medium. Also, courts are only accessible in English. This is something which must be addressed. Either the center or the state, should build a high quality university offering humanities, commerce, science and professional courses in the local language. Less than 10% of Indian citizens move more than 200 km from their home, when they grow up. Such a university may be able to churn out an engineer or a doctor or a journalist who can deal with local folk in her home state, in the local language. Courts could ensure that judges and lawyers know not just English, but also the local language. The knowledge that quality higher education is accessible even in the mother tongue or the local language, may serve as an encouragement to good students in vernacular medium schools, to continue in their own school (and not shift to a CBSE or ICSE English medium school). Scholarships may be offered to such students. A Tamil student must have the option to become a doctor in Tamil medium and treat patients in rural Tamil Nadu and converse with them in Tamil itself.

A well funded university or centre of excellence, in the local language, might also be able to serve the purpose of updating the vocabulary and technical terms, to keep the language fit for contemporary and professional communication.

The government or the media could also take note and publicise the unique paradigm followed at Sardar Patel Vidyalaya in New Delhi. From kindergarten till class 4, the medium of instruction is Hindi, with English as a second language. Class 5 is a transition year where Mathematics and Science are taught in English, whereas Social Science is taught in Hindi. From Class 6, the medium of instruction is English, with Hindi as a second language. This is a top school in New Delhi. The school has consistently ranked within the top 3 schools in Delhi based on the average score in CBSE Grade 12 examinations from available performance data for 2014, 2015 and 2016 . So students have their foundations in Hindi and still receive their middle, higher and secondary school education in English.

Something which keeps the English language thriving is the abundance of interesting literature which makes reading a joy. This brings characters like Harry Potter and Noddy to the junior school kid. We need to be aware that our books for Hindi are incredibly boring for young children. In an era of trains, planes, cars, computers and internet, the excited school student does not want to read a sermon on morals, culture or patriotism – this is what a large number of Hindi stories and poems in textbooks are invariably about. Chetan Bhagat and Amish Tripathi became popular English writers in India, because they wrote something entertaining in plain and simple English. They avoided the pretentious and sanctimonious style used by Indian authors of a more literary background. We need such light-hearted or even frivolous stories in our local languages, to make reading enjoyable. Currently there is too big a difference between casual, colloquial Hindi and what is present in the textbooks. It is likely that this holds true for other Indian languages as well.

The last point I’d like to touch upon, is a recognition of the failure of the third language slot in the school syllabus. Some states have a mandatory third language all the way till Class 10. In many states, this is taught only from class 5 to 8. A large number of ICSE and CBSE schools teach Sanskrit for four years but despite hundreds of thousands of students studying it, the world’s only Sanskrit daily struggles to stay afloat. This should be a sobering reminder that simply forcing a language onto a large number of students, and making it an academic burden in their school years, is not a way to preserve it. It will perhaps be better, if even just a few thousands of students study Sanskrit – but are taught well, in an enjoyable way which generates a genuine interest in the language and perhaps encourages them to study it even after Class 8, as an elective subject. Teaching Sanskrit to a large number of disinterested students is also a bit problematic as it becomes a squandered opportunity to teach them a modern Indian language such as Kannada or Telugu- which could be far more useful to a student from Delhi who ends up working in Bangalore or Hyderabad. There should be a focus on speaking and conversing in the third language, to appreciate it better.

Keeping these ideas in mind, it might be possible to preserve our own languages, and see them flourish, without making a huge economic gamble of suddenly swerving way from English. A great amount of top notch research at US universities is done by those whose mother tongue wasn’t English, and that could be replicated in India as well. The much reviled elitism of English-medium educated products in India is a consequence of states trying to forcefully promote the mother tongue, leading to a situation where the English-medium educated find themselves more favoured in the job market. Let’s not be too obsessed by which language a student learns – the idea is that a student must know at least one language very well.