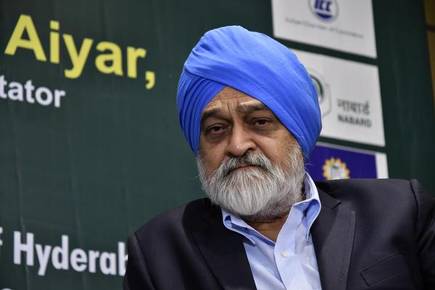 In the recent interview, the famous economic expert Motek Singh Ahluwalia has reiterated an important truth about how the safety valve fixed by the then UPA2 government to nullify the Supreme Court verdict on convicted lawmakers from contesting election has made Manmohan Singh look weak and helpless. UPA 2 cabinet has passed an ordinance to protect the convicted leader especially in corruption cases, may be, Lalu Prasad Yadav of RJD and create an immunity to unabated corruption in India.

People of India must remember how UPA coalition government along with DMK and other regional parties defamed India through several scam allegations such as 2G, Adharsh, CWG, Coal block allocation etc.

The ordinance of UPA 2 to protect the convicted political leaders was the best example for how the entire cabinet has cohesively worked to protect and promote corruption. Mr. Motek Singh Ahluwalia has re-kindled our memory and conscience by revealing the helpless state of Manmohan Singh, the then Prime Minister of India who had asked Ahluwalia whether he should resign or not. Ironically Manmohan Singh chose to ask or consult Ahluwalia and not the congress people may be because Singh would have realized that speaking to congress people would make no sense because the cabinet of UPA 2 only has brought such an ordinance under his command.

Several congress men would have worked from behind the scene to bring such an ordinance to protect the convicted leaders but possibly the same set of congress men only would have also propelled the dynast Raghul Gandhi to tear the ordinance in public to give the un-teachable dynast a great image. But none of the attempts of congress party has succeeded in selling the dynast to people as great leader or Prime Minister Candidate thanks to his un-teachable brain, indecent language and etiquette less political discourse.

Modi has correctly said congress does not have either neeti or neta and all it knows is to worship one family, mock Hindus, engage in scams and corruptions and then protect the convicts and scuttle the judgment of Supreme Court of India through promulgating an ordinance against the judgment.

People of New India built by Modi must ask do we need congress party or we should save India by defeating the congress which promotes nothing but dynasty and family politics.

India is referred as ‘PUNYA BHUMI’ because several great spiritual and divine leaders were born in India.

Had there be no Modi, Amit Shah and BJP in 2014, India would have doomed by now and many of us would have been living today like the life in Somalia or other most back ward countries.

During UPA regime, zero governance and absolute corruption was only happening. In the midst of all corruptions, mal-governance, scams, dynastic and family interference, Manmohan Singh remained helpless but would have enjoyed his Prime Ministerial paraphernalia and hence remained loyal to the family.

Manmohan Singh could be so indifferent towards all scams because he did not have any political responsibility for the congress party because he was chosen for the post by the family because of his spectacular and deafening silence over everything starting from corruption to disrespecting the office of Prime Minister and above all, a very loyal person to the family.

Like how we celebrate our Independence day, Republic day, Gandhi jayanthi etc.,, we also must celebrate the death of corruption of UPA in India. India must thank Modiji for saving India from stinking corruption of congress party. Ahluwalia has released his book at the right time.  India should not forget the biggest crime ever has committed by UPA 2 i.e. the ordinance to protect the convicted politicians and scuttle the judgment of Supreme Court of India against corruption.