God, spiritual politics and Rajinikanth alone can save Tamil Nadu 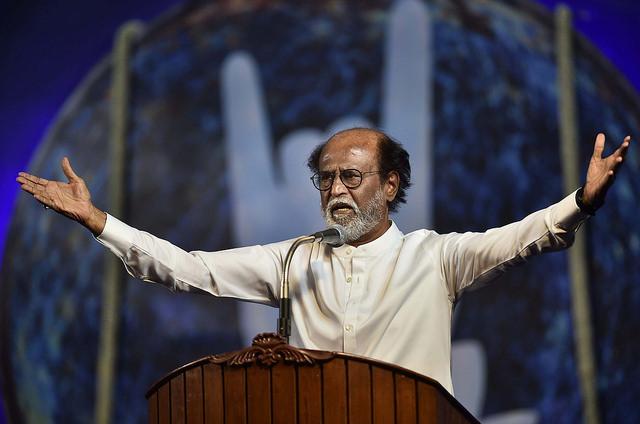 Every world spoken and every meeting or event attended/participated by the Super Star Rajinikanth is rattling the atheist gang and the corrupt dynastic political forces in the state.

The statement of the Super Star about how Late Mr. Cho rose from the onslaught and attack by DMK for his article on EV Ramasamy Naicker’s protest in Salen way back in 1971 ridiculing Hindu Gods Lord Ram and Sita and also the fearless voice of Cho against emergency etc., Super Star has rattled the base of the atheist gang and they are now up the ante to attack Super Star for speaking certain historical truth to the present generation.

Tamil Nadu is yawning for a change and people are desperately longing for the Super Star to enter the electoral politics to save the state from the corrupt dynastic force.  The loud and repeated denial of any such abuses to Lord Ram idol or his pictures had happened by none other than the Drawidar Kazhagam sounds nothing but how the DK has changed over time and how groundless DK has gone in front of Super Star.  Instead of accepting the incident gracefully and apologize for the same, DK has gone in for terrible denial and is asking the Super Star to apologise for speaking truth.

Tamil Nadu is a land of spirituality, great Hindu tradition, devotion and land of Siddhars.  But the anti-God rhetoric and atheism in the name of installing rationalism and equality, social justice etc., the Drawidian politics has reduced the state to dynastic politics and family worship; where only the son of Karunanidhi and then his son Udhayanidhi alone have the right to rule the state.

The socio-political culture of the state is in utter confusion. More than in any state in India, people of Tamil Nadu are the most God worshipping people; stand in long queue for hours and even days to give their offering in temples. But at the same time, the same people also elect those who abuse God, ridicule God, mock all those who worship God is a big ‘psychological paradox’ even the world famous psychologist Sigmund Freud may not able to explain.

Why the divine worship of people have not persuaded them to eliminate all those corrupt, dynastic political party that promote nothing but hate Hindu culture, abuse God and mock the God believers is difficult to explain.

Perhaps people of the state would not have found a true spiritual leader, who is honest, incorruptible, hard-working and simple, have great vision and passion and hence have gone option less. But the in the recent time, people are highly charged up, enthusiastic and are hopeful because Super Star Rajinikanth is likely to enter Tamil Nadu politics to save the state and people from family worship to God worship and development.

In the name of social justice, the corrupt dynastic political force has reduced the state to mere caste re-grouping and purchase of votes for payment. The spiritual feelings people follow in their personal life needs to be translated to the state as well and only then the state can be saved. People of the state appear to have understood the importance of eliminating all negative and hate politics and abuse Hindu culture.

By venting hatred over Brahmins, the non-Brahmin upper caste people in Tamil Nadu are doing nothing but securing all favours for own caste group and pushing the really deserving backward communities to further backward by denying their rights and opportunities.

Further, the communities that enjoy reservation, the economically stronger ones are exploiting the weaker ones in the same caste block and that is why Sattanathan commission has recommended for exclusion of creamy layer from reservation which the then Chief Minister of Tamil Nadu has denied may be due to the possible political backlash and loss of DMK’s vote base.

For social, educational, economic and political empowerment, people of the state must not only elect Rajinikanth but more importantly, must defeat DMK and only then the state can be saved.

It is not just God and divine worship in temples alone is enough, spiritual politics and Super Star is also essential to save the state from corrupt dynastic politics. Everyone those who lived and grown though the politics of abuse God, abuse Hindu culture over the last 60 years must realize that the future of their children and grandchildren can be insured only through goodness and Godliness and fortunately Super Star Rajinikanth has boundless goodness and Godliness to save the state from corrupt dynastic force.