More
Home Opinions Impact of abrogation of Article 370 and 35A
Opinions
Updated: 14 October 2019

Impact of abrogation of Article 370 and 35A 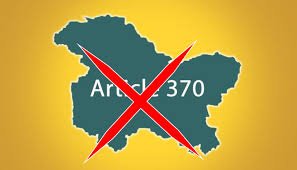 The political leaders of the Kashmir Valley, as well as Pakistan, seem to have been suffering from mental agony since the day Article 370 and 35A were scrapped by the Government of India. From August 5 onward, they have been making false allegations against our armed forces, threatening to have bloodbath soon after the curfew is uplifted, claiming that Kashmiris are denied of their basic rights and many more false accusations, which nobody believes to be true.

A question pops up into everyone’s mind: What makes these political leaders so restless after the abrogation of Article 370 and 35A? Let’s analyse every aspect regarding the abrogation of these two articles and the changes Kashmir is going to witness over a period, which in turn, will make us understand the reasons behind the anxiety of a handful of leaders, who are opposing it.

What is Article 370, and how was it incorporated in our constitution?

Article 370 grants autonomy to J&K. It states that any law enacted by the Government of India needs to be approved by the assembly of J&K – except the law regarding defence, finance, foreign affairs, and communications because these  subjects were included in the “Instrument of Accession” signed by Maharaja Hari Singh, only then the law is applicable to the people of the state. The laws of ownership of property, fundamental rights and citizenship of the people of J&K are different as compared to that of residents in other states.

In July 1949, Sheikh Abdullah, the then Prime minister of J&K, and his other three colleagues joined the constituent assembly and successfully negotiated with our policymakers to incorporate Article 370 in our constitution.

What is Article 35A, and how was it adopted?

Article 35A states that the state legislature of J&K has the sole authority to decide who the permanent residents of the state are. It also provides them special rights regarding employment, scholarship,  acquisition of property, permanent settlement in the state and other forms of support provided by the state government.

In 1954, Article 35A was inserted in our constitution through constitutional order, which was issued by Rajendra Prasad, the then President, on the advice of PM Nehru.

Now, the question arises how the abrogation of these two articles would change the fate of J&K. Let’s analyse the changes that will take place in Kashmir over a while.

1. The most vital change that Kashmiris will experience is the increased  job opportunities. After the investment summit, which is scheduled to take place in October, many business tycoons from all over the world will invest in Kashmir which will create a large number of jobs for the residents of Kashmir.

2. The education system of Kashmir will greatly improve because teachers, from all over India, along with their families can now easily settle there. Earlier, no teacher wanted to go to Kashmir because of these issues, which in turn, degraded the quality of education in Kashmir.

3. The political leaders of Kashmir misused the financial aids provided by the central government for the development of Kashmir, either for their personal interests or to support the separatists. The abrogation of Article 370 will put an end to the rampant corruption going on in Kashmir. The shops of the separatists will also shut down, and their mission of destabilising the internal peace and security will come to a halt.

4. Once the situation in Kashmir becomes normal, tourism will thrive at a supersonic speed. Due to terrorism, the tourism sector of Kashmir was badly affected, but it will soon make its place in the list of best tourist destinations across the world. It will bring prosperity in the valley.

5. Several migrant communities do not have a Permanent Resident Certificate which restricted them to buy property, get government jobs, avail scholarships and other forms of support provided by the government. But, after the abrogation of these articles, they will be considered as the resident of J&K without any certificate. Now, they will be treated equally and can exercise every right that a Kashmiri does.

These are some major changes that the people of Kashmir will witness within a few years. Once again, Kashmir will become the heaven of this planet. Now, let’s discuss the impact of these changes on the political leaders who are opposing it.The political dominance of all such leaders will come to an end.

After the abrogation of Article 370 and 35A, people of Kashmir will get education and job which will thwart these leaders from brainwashing them and furthering their agenda of making Kashmir an independent state. Every corrupt politician will be investigated, and if found guilty, will be imprisoned. These leaders are opposing only because of their own interests, but nothing can be undone now. The Modi led government has already taken the historic decision of making Kashmir the heaven of this planet.