In a tweet dated July 1, Aadita Chaudhury claimed that Dharma is used to justify oppression of Dalits, Adivasis, and Shudras. 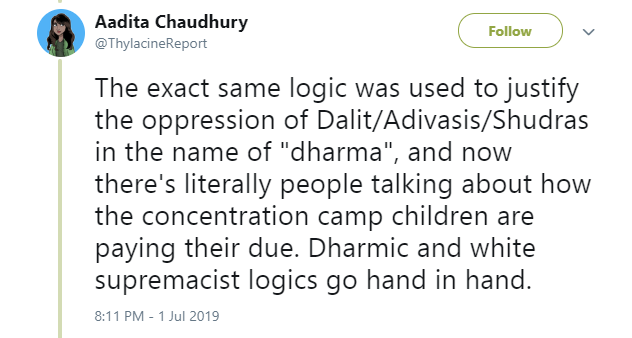 Of the many things wrong here, perhaps the biggest misconception Chaudhury carries is her conflation of the societal construct that is the birth-based caste system with the Dharma-prescribed varna system which organizes people by their professional disposition. Shudras are one of the four varnas but no Dharmic scripture contains any text that has been used to oppress them. Meanwhile, neither Adivasis nor Dalits find any mention in Dharmic scriptures.

Chaudhury, who is a Ph.D. candidate in Science & Technology Studies at York University, in Toronto, Canada, has also written an opinion piece titled ‘Why white supremacists and Hindu nationalists are so alike’ for Al Jazeera, a media channel funded directly by the State of Qatar, an Islamic monarchy. Here, Chaudhury attempts to lump Hindu nationalists with white supremacists; The former pursue to create a Hindu state inclusive of minorities while the latter, by definition, seek ‘supremacy’.

In the article, Chaudhury also pretends to write-off love jihad as a non-issue, claims modern Hindu nationalists are inspired by Nazi-like fascism and describes Hindutva as the present ‘governing ideology’ of the country. She also promotes the idea that India being a secular state strips it from its Hindu-ness, encourages politicization of animal slaughter among white vegans and contributes to the Dalit-Muslim unity narrative by lumping them as common victims of self-perceived Hindu enemies.