Its age of Jingoism we are told. Toxic hyper nationalism screams another, sports is being used as vehicle (conveniently forgetting 1972 Olympics, then 1980 and 1984 boycott by it either side of cold war divide) so in this age of free flowing headlines lets stick to FACTS.

FACT no 1 and possibly the Only FACT that should matter. 44 of our brave were martyred in Pulwama and the perpetrator of the attack had the audacity to record video before he did his crime in which he did call Hindu’s cow piss drinker among other things.

In wake of the attacks the entire country become one and most sections of society who do REAL jobs to earn their living came out and expressed their sympathies with the victims of attack and I was glad to see many sports stars who represent the nation also join in examples seen here.

Shocked and saddened to hear the news of the #Pulwama attack on our jawans. My thoughts and prayers are with the victims and their families. @crpfindia #CRPF

Now The Indian cricket team is going to play Pakistan in the world cup in June and there is already much speculation as to what is course of action Indian Govt and BCCI need to take, should we forfeit the match against Pakistan or should we boycott the world cup itself until Pakistan is expelled. I am not to going to debate on this topic since there are consequences and it’s not just 2 points what if we need to play Pakistan in semi finals or finals and what happens in next ICC tournament assuming relations have not improved till then do we continue to boycott and does it boycott apply to cricket only as India is scheduled to play Pakistan in Tennis in the Davis cup play off what happens  there. In  fact, Indian tennis had to make the biggest sacrifice by refusing to play South Africa in finals of 1974 Davis cup when it had great chance to win the competition.

So now Indian cricket team is playing series against Australia and in their wisdom the BCCI, team management decided to Honor the Pulwama victims by donating their match fees and by wearing special army hats. Nobel gesture you think right? Surely what could be wrong in this then national team respecting the people who guard the borders and secure lives of citizen’s. Not so after even the sports journalist who gives us headlines in newspapers are actually closet brothers in arms with Tukde gang as these pictures will show 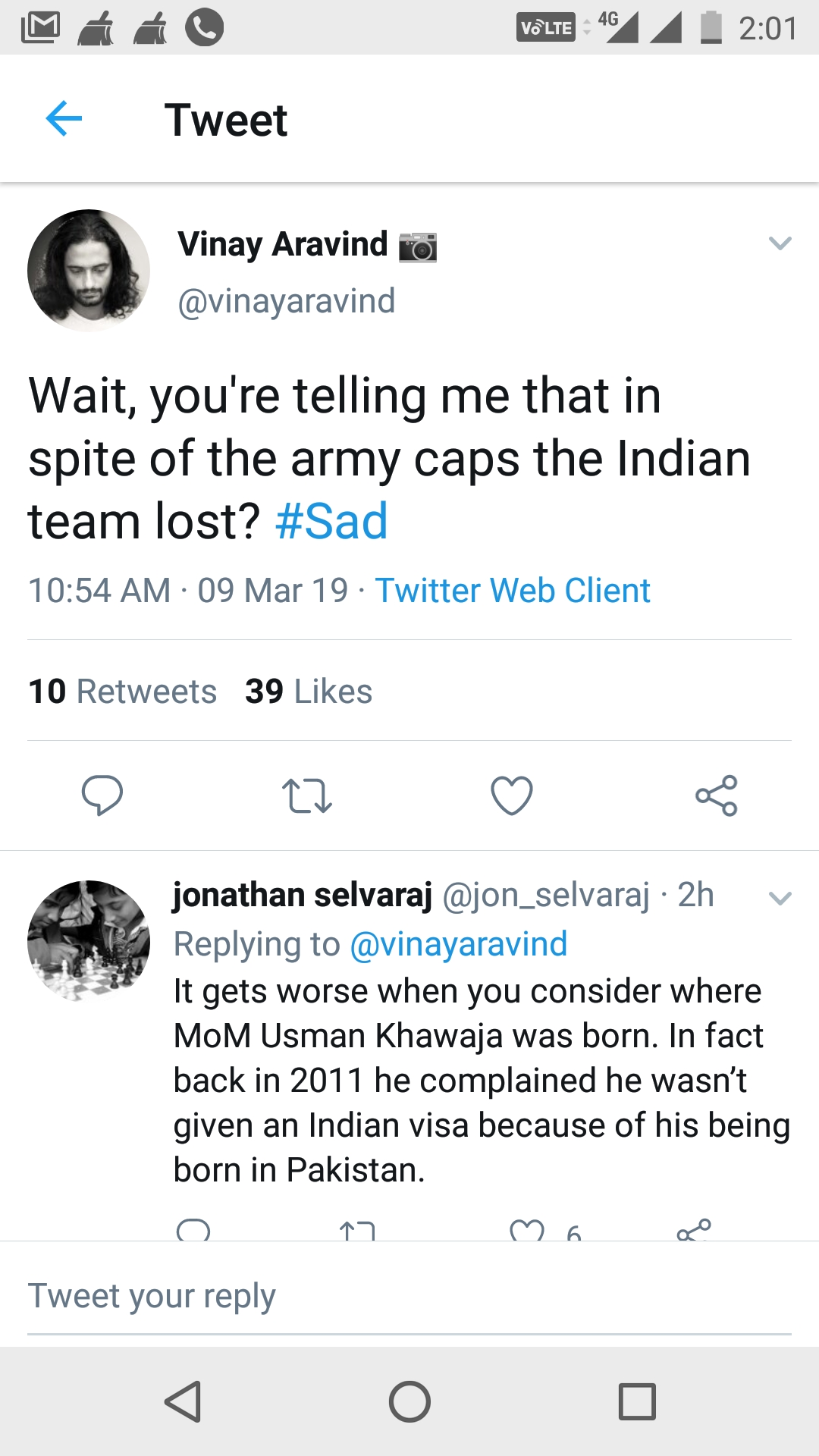 Ok that Vinay Aravind is typically Porali if you go through his tweets you will know. Like typically Porali he has no real job. He claims to be a  photographer! But the guy who replied to the tweet Jonathan Selvaraj writes for ESPN.IN and he seems to be happy and sarcastic that India lost the match after wearing army hats. The usual Israel connection comes in. Why we are not surprised at all. And look at the wording “forcing idea of military valor into mainstream” so he has problem with military valor being glorified he should accept that first.

Next example readers please decide which more cringe is worthy: 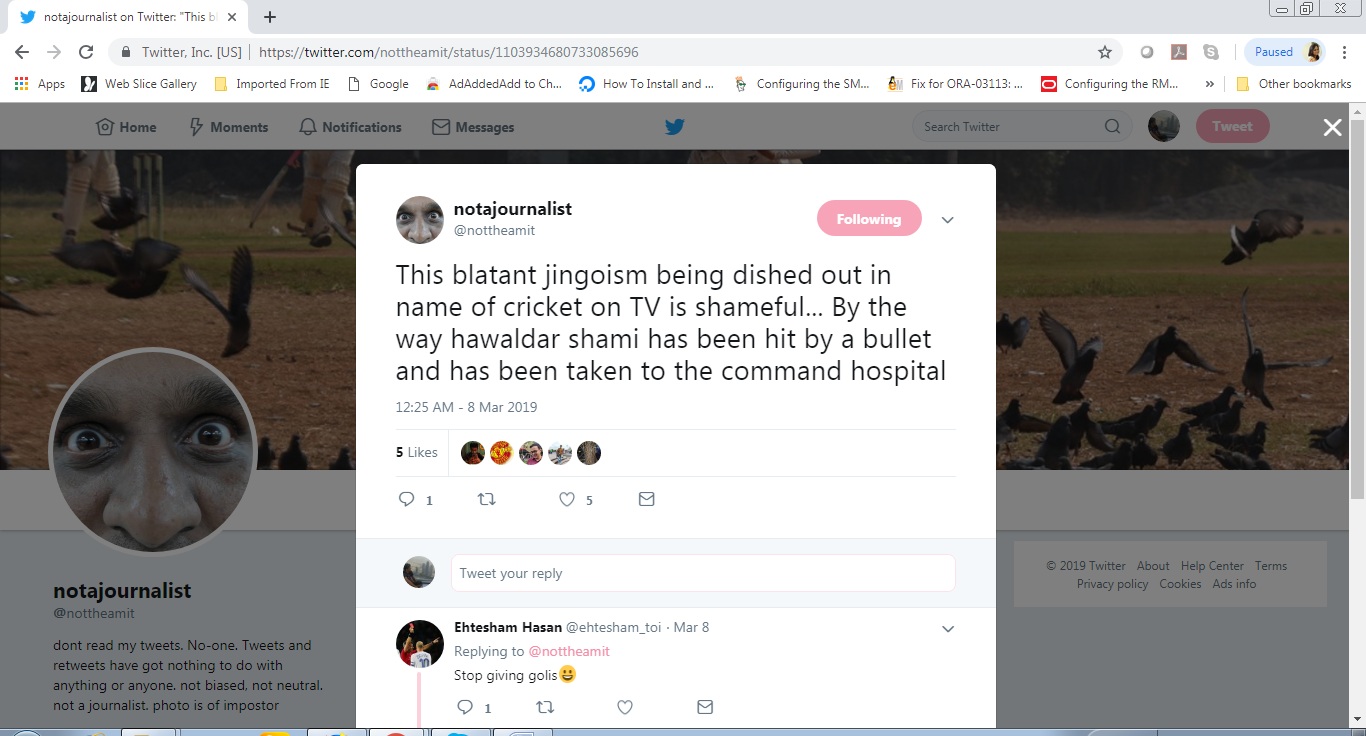 Yet another liberal voice

The tone and tenor when you take about an injured solider when hit by bullet and he is comparing that to a bowler being hit for runs in cricket match.

I can go and collect more examples but just waste of time and makes me feel sad so I will end with something I found on the internet and something which is connected to sports from a place where all these liberals get their inspiration. ENGLAND. The EPL has started Remembrance Day where they honor the soldiers, all soldiers who fought even who fought in the much unpopular Iraq war.

But here we honor Pulwama victims then they make it a joke. The mainstream journalist of this country are becoming out of touch with reality. Those soldiers died protecting people like these. Let that sink in. Hope portals like Opindia continue to provide us truth.