The useful idiots – a portrait of your average JNU edgelord

I would like examine the psyche of the individuals involved in the recent protest in JNU and the subsequent fracas.

Unlike others on social media and elsewhere, I’m not going to talk about the anti-Indian slogans, freedom of speech et al. I’ll just say this on that subject, there’s a fine line between freedom of speech and treason. Though, the comments were objectionable, I don’t think we should overreact. This is just a case of teenagers being edgelords (assuming that these are teenagers, and not the usual late 20s- early 30s, communist failures that still suck up government subsidies on leftist campuses). All they deserve is derision and being mocked.

The individuals involved are students from Kashmir studying in JNU, and your regular garden-variety JNU rejects. The former deserve a rather lengthy exposition and explanation, and shall not be the subject of this post. I shall just talk about our regular JNU edgelords.

I shall first dissect the mental make-up of our dear edgelords, and then look at the larger Communist picture in India. 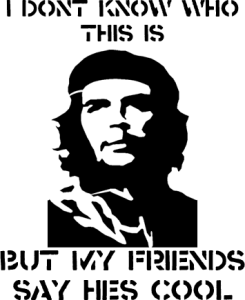 Am I cool yet?

Think back to when you were young. What were the most important things in your life? Family? Money? Career? I would wager that your answer would have been a resounding no to all the things I mentioned.

All the above are of course important, however, for a young individual, the most important things are (1) The belief that he’s a special unique snowflake and (2) acceptance by his peers – those he looks up to and wishes he were more like. This is because the young person is still developing his identity and is not sure of himself.

Now let’s take the case of these JNU edgelords. Most of these individuals would say that they are liberal, progressive, pro-choice, pro-LGBT, secular. All fashionable buzzwords* that are guaranteed to make you seem like the most enlightened and coolest individual ever. These will also help you fit in well within your peer circle – which, within JNU, is inherently ultra-leftist.

I ask you again to think back to when you were a teenager, what were you like? How did you feel? Didn’t you feel anger towards everything and everyone else? Didn’t you feel like you alone have things figured out, and if left in your hands, you would straighten out the system in a matter of days? You would have had contempt for those older than you and a part of the system. “Screw the system, man”, would have been your rallying cry. Your overwhelming sentiment would be that this country is run by incompetent bufoons and that only you and others of your ilk can fix it. You alone have the answer. You alone are enlightened. Everyone else is just a waste of air. The system needs a massive overhaul, and you and your friends are just the ones to do it. You will free the oppressed.

This is what an average young person is like. Brimming with new ideas, anger, and values and scoffing at old attitudes, system and incompetence.

A lot of these individuals decide to do something productive to better their lot. They study, get jobs, do social service, effect social change through educating themselves and others, vote responsibly and do generally un-glamorous things that help move society and the system forward. All these go unnoticed.

The rest of these individuals go to JNU.

(Of course, I don’t just mean JNU, as we speak there are copycat protests flaring up in a few other places. As well as a lot of wannabe cool, try-hard “enlightened intellectuals” who attend marches in support of the JNU students. But you get the drift).

Frustrated individuals who are convinced that they know best. Contemptuous of people and organisations that came before them. Secure in the knowledge that they alone (in the thousands of years of history of Man) possess the ideas and the means to change the system. They know best.

To this tinderbox, add the fact that pretty soon they would have to step out into the real world. Probably get a job and support their family. “Forget that man, screw the rat race. Man was not made to spend his life in a cubicle. Wake up sheeple, capitalism has ruined all your lives and you don’t even know it”

Added to this is the fact that as a young person, you’d obviously want to rebel against the current ruling dispensation and ideology. You would also fall for the ideology that your peer pressure deems cool. And in a majority of Indian colleges, the nationalist voice is often represented by individuals who are not part of the same social clique as the unique snowflake. The nationalist also seem decidedly downmarket with his rustic language and English knowledge and skills. In contrast, the communist seems edgy, mysterious, and intellectual. So, our unique snowflake buys into it. “I just believe in a utopia, bro. No artificial man-made borders, where people can do whatever they want with whomever, and share everything equally. More importantly, we don’t have to work for anything at all”.

Just the perfect ideology for our “intellectual”, unique snowflake – an ideology that will reinforce his “uniqueness” and the fact that only he and his comrades know what’s best for everyone else. The rest are just un-enlightened clowns.

“Well”, thinks our snowflake, “Sign me up and pass that Che T-shirt”.

And this is how our wannabe cool, special snowflake drinks the Communist kool-aid and decides to support a thoroughly discredited ideology that’s responsible for millions of deaths across the world, and is pretty much dead in India and the world. Thus the cool edgelord is born, who likes to equate being nationalist to being an a RSS/Hindutva supporter. And also considers rational right-thinking individuals with differing opinions as un-enlightened plebs and likens them to fundamentalists of the tea party/creationist Christianity and fundamentalist Islam types.

Eventually, our snowflake starts believing his own hype and starts thinking of himself as an “enlightened liberal”, and part of the last stand against those savage conservative Hindoos.This could also be an act of rebellion against their parents, “Damn you, I won’t do what you tell me. Can’t you see how enlightened and progressive I’m”.

I think that this sufficiently explains the psyche of the protesting individuals. My suggestion to everyone is, chill out. These are just kids being kids. Pretty soon, reality is going to hit them in the nuts. That will be punishment enough. They will have to enter the real world – get a job or be homeless, or become a journalist and die dreaming of the coming great proletariat revolution. The choice is theirs. So just mock them and move on. Don’t waste your breath.

Has everyone forgotten the 70’s when the entire country seemed aflame with ultra-left fervour, from movies to college campuses? What happened to all those edgelords? they just grew up, got a desk job and cultivated a pot-belly. The wheel keeps turning. So why are we collectively losing our shirts over this trivial incident.

On a non-related note, do I think Capitalism is perfect? No. But it is a lot better than the discredited ideology whose kool-aid these edgelords have been drinking. Maybe, once India is as developed as the Scandinavian countries we can experiment with socialism again, and have subsidized everything. But for now, we’ve been down the left route, and with disastrous consequences. W. Bengal and Kerala are living examples of what happens in a left run state (Think of Kerala’s condition without gulf remittances, before you start thinking of a rebuttal).

Also, did the current crop of communists somehow fall asleep in a time-machine in JNU, in the 70’s, and wake up in 2016, thinking that communism is still a viable option?

As mentioned earlier on in the post, now I would like to talk about the larger picture – Communists, and their supporters.

*These treacherous loons have somehow convinced themselves and others that they are liberal, progressive, and are the paragons of free speech and openness. Really? Do the purges in various communist “utopias” ring any bells? No? How about the Gulags in the erstwhile Soviet Union, and similar scenarios in other communist nations. A communist state is the numero uno enemy of free speech and dissent (Tank-man says hi). Please educate yourselves about these mass murdering lunatics.

The major victory that the communists have won in India is to succeed in portraying themselves as “liberal” “progressive” “open”, when that is remotely not the case. The same individuals agitating against the government would crush any anti-communist dissent with iron force if they were in power.

The most humorous thing is when communists use terms like “dissent”. As if they are locked in some power struggle with an Indian state that is bent on exterminating them. Don’t try to be so cool and edgy, you might cut yourself.

All nationalist forces need to reclaim words like “liberal”, “progressive” et al. We are all that and more.