Being Anti National is being Anti India, not Anti Modi.

Let’s get this straight at the outset, each one of us has their own vision of India, each one of us has a different interpretation of this nation. This is a liberty given to us by the constitution wherein we can decipher our own understanding of this nation and its functioning. But even the most liberal understanding surely has an upper limit of acceptance? Each Indian has a right to express themselves, to be heard and we must defend onto death that right, but we cannot defend Indians (maybe misguided, maybe not) shouting ugly slogans threatening the sovereignty of the very nation that allows them to shout those slogans.

Think about it, those champions of free speech who quote the constitution to defend this right, are going against the very grain of that constitution in demanding India’s destruction. That is the biggest irony. What happened on February 9th must be viewed in the right context, JNU has always been a leftist university and we must encourage the vibrant student politics that has thrived there over the years. But we have seen enough instances over the past decade where the University has allowed its name to be used in the same breadth as ‘Anti Nationalism’. Is somebody hijacking their ideology to promote hate? Is somebody being encouraged to do so from within? That is for the University and the police to determine, all I know as a patriotic Indian is that it cannot continue. Let’s not kid ourselves, we have a long way to go in becoming a mature democracy, that accepts all view points no matter how extreme. But in our pursuit of being an ideal democracy that allows everything under the sun, let us not stoop to such levels, so as to defend Anti Nationalism.

The fact there is visual proof of the posters and slogans raised in the Pro Kashmir Azadi evening on Feb 9th is enough to constitute a debate and an enquiry into the matter. Whether a video is doctored or not, and if Kanhaiya is partly anti national or completely anti national is another matter. He allowed his students to raise these slogans and cannot shy away from responsibility of this. Those responsible will be punished. 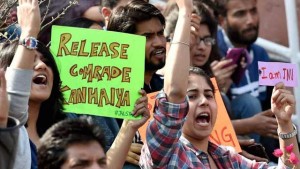 An image showing JNU Students in support of the SU president Kanhaiya.

Coming to the coverage of the Aftermath of these protests, as expected there was the usual Freedom of Speech article in the newspaper, the usual leftist media channels focusing on completely the wrong issue. Choosing to focus on whether JNU should be shown in bad light rather than seeing the larger danger it possesses to India. It is not about JNU, although some media anchors choose to defend it for that reason, given the name and their allegiance to the Congress party.

Everything today is seen in only 2 categories, Pro Modi and Anti Modi. So anything that is not proffessed by Modi must be backed, no matter what it is. I’m convinced that is the brief some Media channel editors work with. But in your hate for Modi, ask yourself can you afford to encourage elements which, if not nipped in the bud could go on to destroy our very existence as Indians? No, I am not sensationalising the issue, for this is only the start. If we let them off the hook now, they will grow in number and then these very left liberal, Lutyens Delhi media will say, ‘Maybe they have a point, given how many believe in it?’ Can we allow this to escalate to a point of no return?

I’m sorry but your hate for Modi will not be allowed to be used as a shield for backing Anti India forces. We are tolerant, but not this tolerant. And I dont care if we are labeled thugs, bhakts or anything else, but we love our country and we will call your bluff. The bluff these agenda driven media anchors use to show their intolerance to anybody who differs with them by calling them ‘bhakts’. It’s gone on too long and will not happen anymore.

Modi will come and go, BJP will come and go, even your agenda driven media career will be behind you soon, but please do not allow India to fall prey to such hate. We cannot allow our future generations to grow up in an atmosphere of fear, an atmosphere that teaches them to doubt their nationalism and shy away from showing their pride for India. Let us remind ourselves every day of how lucky we are to be born an Indian. Being Anti National is being Anti India, not Anti Modi. 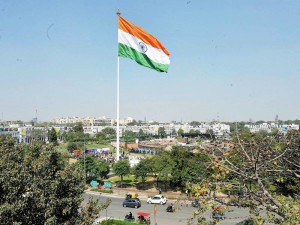 Let the Indian flag fly with pride and remind us of our roots. How lucky we are to be India.