More
Home Reports Boycott of Snapdeal due to Aamir: It had a reason, and it sent a...
Reports
Updated: 29 November 2015

Boycott of Snapdeal due to Aamir: It had a reason, and it sent a message

Snapdeal  is facing flak on Social Media these days after a controversial  remark made by  its brand ambassador Aamir Khan on growing intolerance in India. Mr. Khan said that his family contemplated leaving  India. And the unlikely victim of this whole saga  has been Snapdeal.

The  e-commerce giant is bearing the brunt of people’s  anger in the form of App wapsi  & ratings downgrade. People vented their anger by  boycotting Snapdeal ,deleting its app & writing unfavourable reviews leading to its downgrade on Google Play Store. Here is a tweet by Suresh Nakhua: 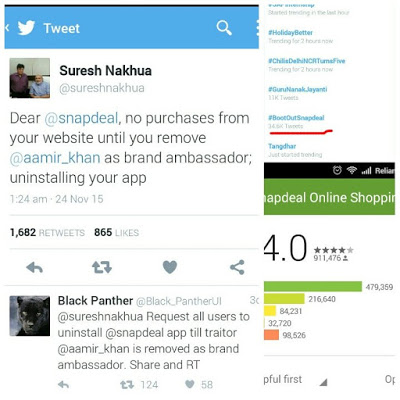 Hashtags like #BootOutSnapdeal  & #Appwapsi  became the top  trends on twitter. The message was loud & clear – Hit the ecosystem where it hurts the most.Usual protest methods like candle march or burning public properties or sitting on Dharnas couldn’t have affected Aamir Khan in any manner.

So the economic boycott of Snapdeal was the only way which directly affects Aamir who happens to be the Brand ambassador of the e-commerce giant.

The drop in sales due to this economic boycott, mass deletion of the app by users, and negative reviews directly hits the finances of Snapdeal as well as affect its goodwill (intangible asset) and thus a perfect method to convey the message to Aamir khan that his irresponsible statements are going to hit all his endorsements. This not only affects his own finances but also his brand value which may have a bearing on his future endorsements. 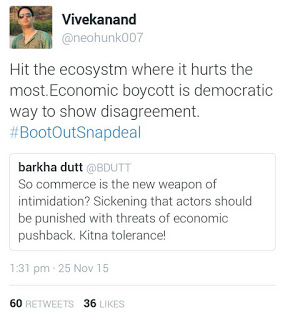 And certainly it hurt them as many ‘Thought Liberals’ jumped in to placate the common man hurt by Aamir Khan’s remark. Some tried to douse the fire by trying to delink Snapdeal from Khan’s comment. As Snapdeal started facing consumer backlash, many even questioned the legitimacy of this protest. Quite evident from this tweet by Barkha Dutt: 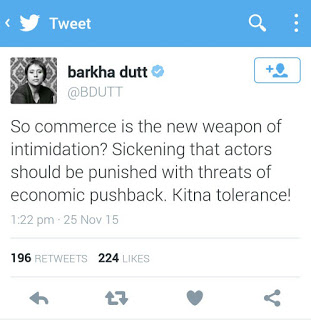 Soon they were shown the mirror by being reminded about the Gandhian philosophy of “Non-cooperation” & economic boycott as a legitimate & democratic way of protest. 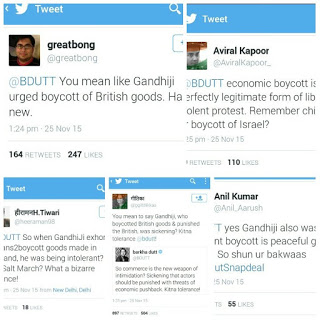 In the process, tweeples also exposed the hypocrisy of such “thought liberals”. 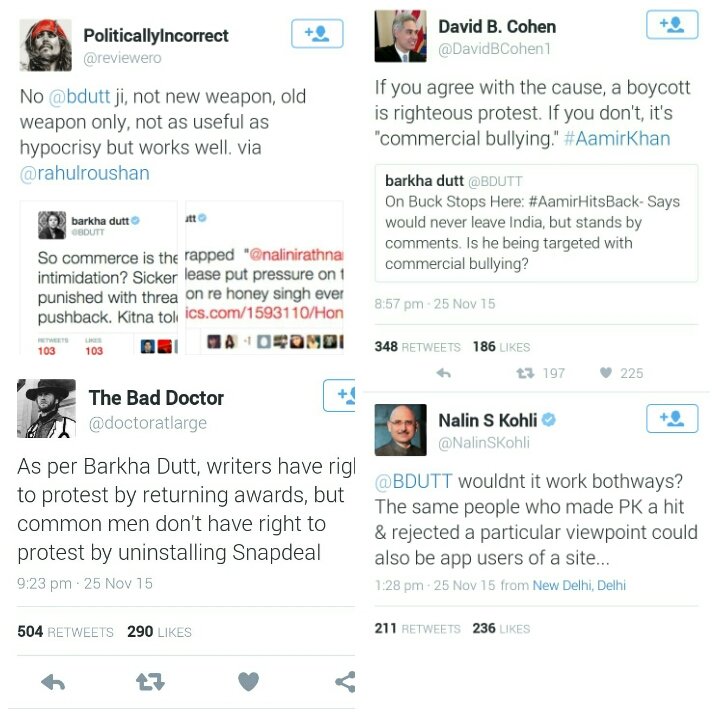 So has Social Media got a new tool to fight against biased MSM & ‘thought liberals’? Much to the disappointment of many, the answer is Yes.

The Social Media is certainly responsible for amplifying the backlash which Snapdeal is facing. And it was only possible due to breathtaking power & speed of Social media because today everyone with a cellphone is essentially a reporter.

This continuous backlash on SM & mass deletion of its app forced Snapdeal to remove Aamir Khan from its cover page on Twitter.

So is it Good or Bad ? Well in my opinion it depends on the cause for which it is used.

According to an article by Wharton : “Social media outrage, it seems, is a beast with the fangs of a rattlesnake, and the attention span of a gnat.”

Well Social Media is here to shape the socio-political environment & this outrage is completely justified as nobody has the right to defame our country.