Hindus are not safe in Hindu land: 2 Sadhus brutally killed before police and media diverted them as thieves.

Bhārat being the land of Vedas, Upanishads, Yoga, Ayurveda, Alchemy, Astronomy, Arts, Architectures, Medicine, Mathematics and a overall diversified spiritual wisdom gave a reputation of Viswaguru. But now, it’s not the case after 800 years of Mughal invasion and 200 years of British dominance. As a result of 1000 year suppression, Bhārat’s national identity and heritage got ruined.

Add on to such obnoxious regime; few communal and agentic traits got canker. Christian conversions and Islamic terrorism are very intense but under the mat. Campaigning a religious faith, belief or practise is no where suppressed. Bhārat holds 9 to 20 official and unofficial religions (religious bodies) where one can not see such acceptance in any part of the world. Such toleration was taught by Adi yogi, Sikh gurus, Jain swamis, Buddha monks and Hindu pandits. So far so good Bhārat is known for its ‘unity in diversity’ but the future is frightened.

Recently, A brutal attack happened on 16th April, 2020 in Palghar, Maharashtra. Two monks, 70-year-old Kalpavrishka Giri Maharaj and 35-year-old Sushil Giri Maharaj along with their driver 30-year-old Nilesh Telgade were on their way to Surat to attend a funeral of another monk. When they reach Gadakchinchale village, a wild and insane crowd of over more than 110 people sheathed them and dragged out of their car. Till we don’t know the reason behind, but the mob beat them till death and anti-national media suspects that they were thieves. All this happened in front of a police and they are just eyepiece in the situation. Watch the blood-curdling video here.

How could any human can beat a 70 year old elderly man, that too a Monk! No where in the world it happens, but it happens in Bhārat.

After 4 days from incident, the Maharashtra government (Shiv Sena) on Monday suspended two policemen. On Sunday night, Palghar Police tweeted that 110 people have been arrested in this case out of which 9 are minors. The whole country is waiting for Maharashtra police investigation and their way of justice.

Police are meant to protect their citizens. In Bhārat, people treat them as Kshatriyas (Saviours of dharma and people) but when the monk in below video approach to save his life and trying to latch on to the policeman, he releases himself and walks away, by leaving the Monk to mobs. In around 43rd second of below video, one of the bystander scream “maar, Shoaib, maar”. Unfortunately, police or media don’t focus on this. Because we are seculars. By the way, that applies only for Hindus.

As usual, the anti national media in present Bhārat taking every chance to manipulate the situation from CAA, NRC to today’s incident. NDTV, Scroll.in, the Wire and other media just projected the dead men as thieves.

Here are the screenshots of such baseless news 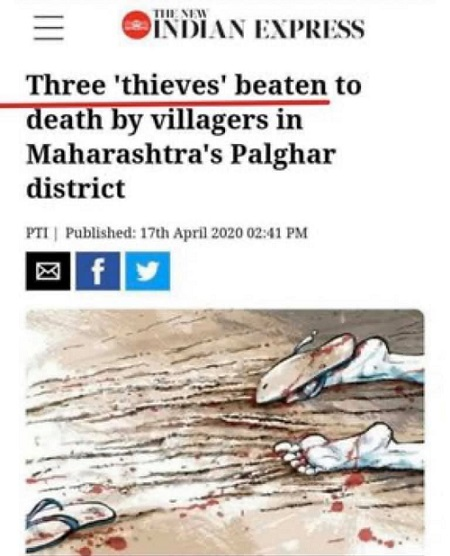 People of the monk community said the village is tribals dominated and most of them are Christians while some are Muslims. Some even say that the police, out of fear of the tribals, handed over the Sadhus to the mob which later beat up those Sadhus to death with sticks. luckily, someone captured these videos, if not, the media and Shiv Sena’s Maharashtra government may not investigate nor intervene.

What questions raised in people of Bhārat ?

How could those mob gathered in such quick time, was it a planned attack?
If the villagers suspect these monks are thieves, why don’t they handover to police?
How can the villagers get such sticks without planning?
Why the police behave such undefended?
Why the attack was hidden for 3 days?
What’s the shiv sena’s step in giving justice?
Leftists and liberal media use to claim Modi government is in favour of Hindus? What’s their take on this attack?

Akhil Bharatiya Akhara Parishad President Mahant Narendra Giri hinted at a bigger conspiracy over the murder of these Monks. Indeed, everyone believe the same. Hope the Maharashtra police and shiv sena government would respond work well for better justification. If not, People are very much ready to give support and strengthen BJP in Maharashtra.