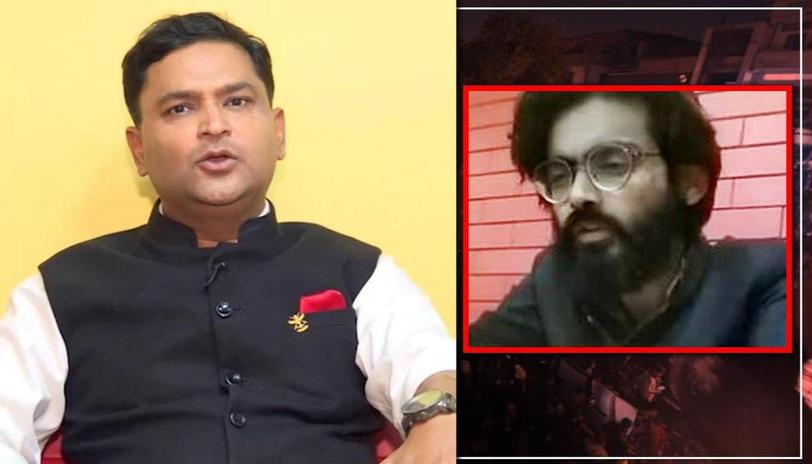 In an interview to the YouTube channel, “Defensive Offence”, Major Gaurav Arya warned that the fiasco at Shaheen Bagh was merely a test case. The grand plan is much more pernicious.

With this PhD, he has become an expert-of-sorts on riots. Accordingly, he went to AMU and gave a speech, and recommended that the 22 km wide Siliguri Corridor (informally known as Chicken Neck) be blocked. Should it so happen, the Army would not be able to enter the Northeast, and the Corridor figures in China’s war plans. We may transport troops by air, but it limits the numbers that can be deployed, and heavy equipment can only be moved through the ground.

He asserts that even a 12th grade is aware of the Corridor’s significance. That Sharjeel made a reference to it, therefore, should not be construed as a worry to the effect of, “Oh! He is a strategist! He must have been trained by the ISI.” The latter part may be true, but it does not make him a master strategist.

To whom was Sharjeel Imam giving a clarion call? The demography of the Corridor has changed in the past few years. Bangladeshi Muslims have settled in the area. Chicken Neck is the land route for moving troops. The grand plan is that in times of conflict, any leader, a la Sharjeel Imam, would give a clarion call and thousands of people would block the strategic Corridor. They would do it the way they did it at Shaheen Bagh. To those of us who live in Noida and Ghaziabad, this blockade at Shaheen Bagh is a major inconvenience. Half an hour of travel time gets extended to three hours. I, therefore, say that Shaheen Bagh was a test case.

Major Arya is unequivocal in saying that the Shaheen Bagh protests have nothing to do with the CAA and NRC.

The residents of Delhi now face inconvenience. It is prudent to note that there is no Army movement in Delhi. The same, however, does not hold true for Siliguri. Should it be blockaded it for a month, the effects would be catastrophic. In war, even a day is quite momentous. Sharjeel Imam is calling for blocking it for a month!

Major Arya turns to Bollywood, and unhesitatingly debunks its sanctimony. He is keenly aware that a few actors think of themselves as thinker-philosophers should they be involved in a unique film.

He points out that Anurag Kashyap and Anubhav Sinha, along with several others, in front of the Gateway of India, had a video shot of themselves singing the Anthem. He clarifies that they do have the right to do so. However, the same group had said, as recently as two years ago, that it is not necessary to stand for the Anthem, for they have respect for India in their hearts. Why are they, therefore, agreeing to show respect for the Anthem by standing for it and waving the Flag today? Because, it suits their political narrative today.

Isn’t Sharjeel Imam better than them? He openly calls for the vivisection of India. I would openly say he is a terrorist. However, he has, at least, the temerity to be honest. I do despise people like Sharjeel Imam, but I despise the duplicitous bunch more, for they talk of India only on the face of it. I challenge the likes of Anurag Kashyap and Anubhav Sinha to be firm on their earlier stance of not standing up for the Anthem no matter what. I challenge them not to not shift their stance to suit some political narrative.

This, too, is a conspiracy. He points out to Sunjuwan in Jammu, where, to one side of a road there is a cantonment, and to the other, is a settlement full of Rohingyas. They settled when J&K was a state, under the tenures of the Abdullahs and Muftis. They allowed them. Apparently, Article 370 and 35A were only for us Indians. Why have they settled them in Sunjuwan? Because there is a cantonment nearby. The same Shaheen Bagh trick. Blockade of roads to prevent the movement of the military.

Major Arya speaks of a certain politician, still alive, whom he does not name, who had done the same in the war of 1965. He had instigated stone-pelting on the trucks and buses of the Indian Army and tried blocking roads. This is, evidently, a pattern.

The Rohingyas can also go to China. Why do they not go there? It is comparatively nearer. They can also go to Thailand. Why, then, do they come to India? Because there are people here ready to welcome them with open arms in order to settle them here. You would be shocked how quickly they receive Aadhar cards. They are even given voting cards!

The analyst in him is too observant to miss the fact that no millionaire or billionaire is to be seen among the protesters at Shaheen Bagh. The people who are over there belong to either the lower class or the middle class. He asks us to pause to ponder over whether it is possible for a poor or a middle-class person to continue blocking the road for over a month leaving aside his job. Recently, there were photos and videos depicting biryani being fed to the protesters. Mutter-kulchas, tea, fritters were being handed out almost free of charge. Who is financing this picnic?

Recently, journalist Deepak Chaurasia visited the area. Naturally, being a journalist, he tried enquiring the reason behind the month-long agitation of the protesters and sought to know of their demands from the government. They heckled and manhandled him.

The protesters have put up photos of Babasaheb Ambedkar, and are calling for freedom of speech, are lecturing on the Constitution, equality, justice etc. Some journalists, whom I would not name, are welcomed at the protest site with such enthusiasm, as if the journalists were long-lost brothers of the protesters. But another journalist, like Deepak Chaurasia is not welcomed. Evidently, the protesters have nothing to do with freedom of speech and expression. All they want is their kind of expression. Why, then, do they quote the Constitution?

We all agree that India is secular. Secularism is a good concept. This country belongs to all of us irrespective of religion. Babasaheb Ambedkar passed away in 1956. The protesters who swear by the Preamble forget that that the words, “secular” and “socialist” were added to the Preamble in 1976. That makes it twenty years after the demise of Babasaheb Ambedkar. Why do they invoke Babasaheb’s name in the context of secularism? What is the rationale behind putting up the poster of a man who did not write the word, “secular” in the Preamble?

There is, however, a relationship of convenience between the two, for there is one thing common to both: Hatred of India.

Major Arya further analyzes the reason behind the failure of the Left. He says:

The poor does not identify with the voice of the Left, for it does not intend to emancipate him. It seeks to downgrade the rich. It celebrates poverty. The industrious poor man of India, however, wants to emancipate himself. The Left does not allow it. It does not understand the mindset of the poor, and tries to intellectualize everything. To be frank, no one in the real world is interested in its harebrained ideas. People are busy with their jobs and lives.

They will never understand the language of consideration and diplomacy. They are pre-decided, not misguided. It is necessary to stop them. The country has to do this together. Lawfully. Constitutionally. Under the IPC. You may criticize Modi, Amit Shah and RSS, but when you call for secession, it cannot be categorized as freedom of expression. This is sedition, and the sedition law must apply.

It is impossible to not agree with him. The watchful citizen, undoubtedly, shall witness further events keenly, and shall do his own part in not letting anti-national forces succeed.