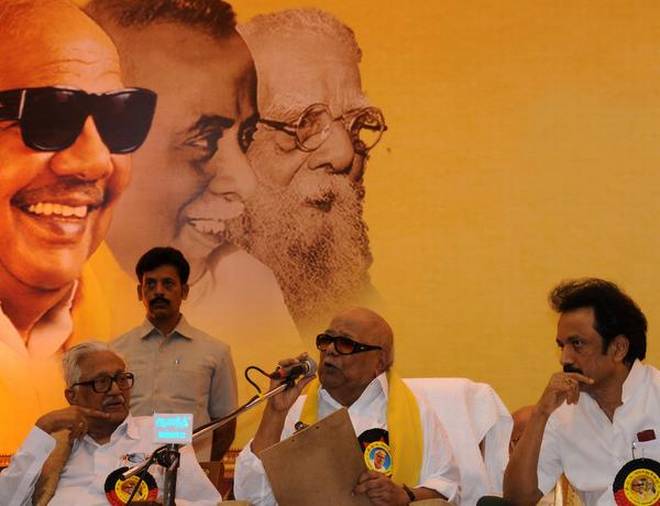 The description of media houses as Mumbai red light business, Karunanidhi only had ensured schedule caste person becomes chief justice of Madras High court and Brahmins as dogs has come because DMK is losing its ground in Tamil Nadu.

In 2019, DMK could successfully sell lies, negativity and polarise minority votes but still required the mercy of a self-declared carrier of Brahmin DNA and an inherited Siva bhakt – Raghul Gandhi to win the election.

It is so unfortunate that still DMK differentiate and give special reference within inverted comas to people belonging to backward community. Otherwise how such a responsible person like Bharati of DMK can say Karunanidhi only had ensured SC person becoming chief justice of Madras High Court. Does that mean DMK still see people based on their community and caste and tell the people that although you belong to such community but still DMK only has done so much to your community etc.?

Finally describing Brahmins as dogs shows not Brahmins as dogs but the fear and nervousness of DMK towards Brahmins. DMK knows Brahmins only can help DMK to evolve a winnable political strategy otherwise why should DMK hire Prashant Kishore, a Hindi speaking Brahmin from North India? Why should DMK need Raghul Gandhi, the self-declared carrier of Brahmin DNA and an ardent Siv Bhakta? Brahmins, Hinduism and God are anathema to DMK but why then the same DMK surrenders its political ideology to Prashant Kishore to win election?

It is not blaming media houses or calling Brahmins as dogs or referring to a former chief justice of Madras as scheduled caste person are not going to help DMK instead it must correct its rotten mind set and the dynastic culture. From Rajaji to Indira Gandhi to Raghul Gandhi to Prashant Kishore, DMK has a long history, tradition and legacy in surrendering before Brahmins to win election. To win election Brahmin hatred was necessary for DMK as well as the brain of Brahmin also.

By calling or describing people from SC community just to appraise how much DMK has done to them is like hitting someone below the belt. Such expression means nothing but the upper caste mind set of DMK against the oppressed community. The Justice party of EV Ramasamy Naicker had carefully crafted hatred against Brahmins to get the support of Dalit community but the justice party was dominated by only the people and the mind-set of non-Brahmin upper caste community. To fool the most backward community, the non-Brahmin upper caste community in justice party used the slogan that they too were the victims of Brahmin domination but in fact were dominating and suppressing dalits and other oppressed communities. The political speeches of one of the brilliant minds in Indian politics Shri Ravindran Duraisamy is the best proof for how DMK has fooled people of the state in the name of social justice.

It is well known that 2021 election is going to be between EPS and Rajnikanth and the third successive defeat of DMK is going to draw curtain to DMK politics in Tamil Nadu. How DMK treat the oppressed community can be simply explained by the actions of Karunanidhi on the recommendations of Sattanathan committee which clearly explained how economically weaker sections of people from several oppressed communities are marginalized by the creamy layer in the respective communities. But DMK did nothing to save the poor people whereas Dr MGR brought reservation for economically weaker section but the efforts of MGR did not receive political support from people.

As long as Amma was alive, DMK could not taste power. Amma stood for people of Tamil Nadu, never played caste politics but DMK tried its best to present Amma as Brahmin but people of TN saw Amma as caste neutral leader, pro-poor leader.

Spirituality, divinity and goodness must dominate in Tamil Nadu politics and not hate God, abuse Hindus, abuse some communities, spread lies, fear mongering and negativity. The best choices people of Tamil Nadu have are EPS and Rajnikanth. Either of the above two only can save the state and not the politics of dynasty, negativity or hate politics. Hope people of Tamil Nadu will show the door to DMK like how people of Delhi did for congress party and save the state from corrupt dynastic politics and politics of hatred.