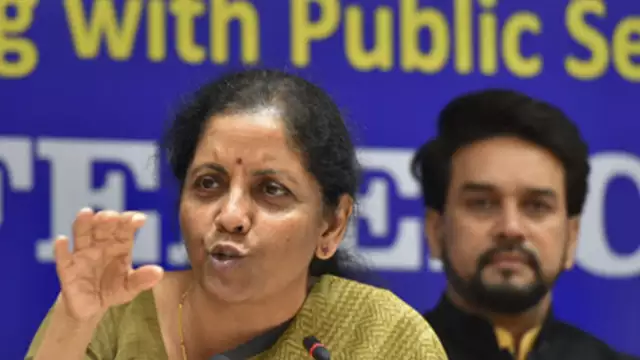 It’s the economy stupid! Modi 2.0 is being pilloried for the slowdown in the economy. Growth is staggering at 5% and P.Chidambaram, despite his trials, tribulations and incarceration, in the INX Media trial, flaunted the five finger mudra to taunt the Modi administration.

The piling up of inventory with the dealers and manufacturers of automobiles are cited as clear indicators of the bad climes we were in. Historically, economists have touted the automobile sector as being symptomatic of the economic conditions and the health of the economy.

Even as the inventory piled up, drop in sales, closures of dealerships, and steep cuts in working hours were being reported, we also had contemporaneous stories of cash piles on which the automobile manufactures were squatting. Be it Maruthi or Tata Motors or any other auto major, the story was of similar genre.

Nirmala Sitharaman, having taken over as just the second woman finance minister in the nation’s history, after Indira Gandhi, was facing a veritable storm from all sides. She announced a series of measures to ‘reduce the ailing automobile and real estate sectors’. Attention to Non Performing assets of banks and financial institutions was an ongoing exercise, and Insolvency & Bankruptcy Code ruthlessly dealt with sickness of several entities, a cruel and decisive blow to crony capitalism, which had built up the muck and debris, unattended over several decades. Now, they complain Modi administration had gone too far in the clean up. Add Demonetisation and GS, all the ills were laid at the doorstep of New Delhi.

But overnight, the problems gathering dust over decades cannot be miraculously sorted out. They need sustained care and surgical treatment. Mere consolidation of nationalised banks was not the answer. Telephone loans were a reality. Political interference in appointments was a stark and naked truth. Whether Modi 2.0 will bite the bullet with big bank reformation of such structural kind, remains to be seen.

The signs of an assertive governance are welcome. The brute majority in Lok Sabha, allied with a cunning and craftily accomplished one in the Rajya Sabha, should come in handy for ushering in major reforms in labour and land legislation. Or, are we speculating beyond the political instincts of pragmatic party men, whose long term vision is only up to the next State election, of which we have no dearth in our amidst.

Be that as it may, before Narendra Damordas Modi emplaned to the US of A for United Nations General Assembly or Howdy Modi? in Houston, Texas, ‘unbelievable corporate tax reductions across the board’ were announced. Corporates went bonkers unable to believe their luck. Modi 2.0 had at long last buried the sting from the ‘suit boot ki Sarkar’ jibe of Rahul Gandhi from Modi 1.0, they said. Corporates, uniformly, concluded that this may be the ‘ultimate trigger to unleash the animal spirits of the entrepreneurial and enterprising business Indian’.

The immediate impact was, of course, on the stock market. SENSEX and NIFTY breached the stratosphere, to record levels. The pink papers and the business channels were frothing and lost for adjectives. And then Nirmala Sitharaman added with gusto. The Modi administration had its ears to the ground. We are a responsive and responsible government. Liquidity is there aplenty. The banks and NBFCs ought to go out there and ‘lend like never before and let the consumers have the moolah to splurge in the coming festival season’. The central government was virtually asking us all, to go against our cultural moorings and instincts that had stood Bharat in good stead. We are a ‘saving’ society. We thrive on thrift. That has served us well. Why should you and I take a loan and splurge beyond our means? Should demand push come from conspicuous consumption against the run of play? Sorry, it is all mystifying.

First of all, the stock market is no reflector of the health of the nation. The world’s richest and successful investor, Warren Buffet, once called it a ‘gambling den where craft and cunning ought to be meshed with patience and prudence’. Now, read the story rightly christened as Stock Market Illustrated.

If you’ve been wondering how the stock markets work, here is a popular story of buying and selling monkeys that draws an analogy on the stock market. Though this is just a fable, it is not very far from reality when it comes to the style of functioning of today’s markets:

Once a man appeared in a village and announced that he wanted to buy monkeys for $10 each. The villagers, realizing that there was no dearth of monkeys in the nearby forest, went out and started catching them. The man bought thousands of monkeys at $10. As supply started to fall down, the villagers stopped catching more monkeys.

Now the man further announced that he would now buy monkeys at $20 each. This renewed the efforts of the villagers and they started catching monkeys again. As the supply diminished even further, people once again stopped catching monkeys and started going back to their farms.

The man further increased the rate to $25. Soon the supply of monkeys became so little that it was quite an effort to even get a glimpse of a monkey, let alone catch it!

The man now announced that he would buy monkeys at $50. However, since he had to go to the city on some business, his assistant would now buy on behalf of him.

In the absence of the man, the assistant said to the villagers: “Look at all these monkeys in the big cage that the man has collected. I will sell them to you at $35 each and when the man returns from the city, you can sell them to him for $50.”

The villagers squeezed up with all their savings and bought all the monkeys. But they never ever saw the man or his assistant again in the village; only monkeys everywhere! Welcome to the Stock Market!

Surely, the answer to slowdown does not lie in reckless loan meals and living beyond our means. Has anyone cared to consider whether India grew too fast too quickly on the automobile sector and real estate sector and sold too many? Just for Re. 1/- a two wheeler and Rs.1001/- a car could be driven to a home – bought on Rs.10,001/- initial payment, on ease of purchase. Inventories were built on the assumption that this buying spree would be everlasting.

We would like India to grow. Keep pace with demand of essentials and even luxury items. Not supply outstrip demand and inventories piling up and then the corporates yearn for intervention. Academics too have gone haywire to blame the slowdown on the ‘maniacal zeal of RBI to curb inflation’.

Excuse me, We the People would rather have a stable economy with a robust growth, built on our hard earned savings and a bearable cost of living, commensurate to our earnings not borrowings. We refuse to borrow beyond our means and be sucked into the vortex of attractive loans. Neither the Stock Market nor piling inventories is of our making. Let the Corporates sort it out. It’s the Economy Stupid!

(Narasimhan Vijayaraghavan-Author is practising advocate in the Madras High Court)