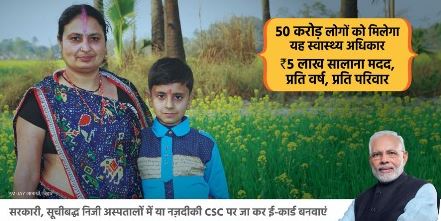 As Modi Government’s flagship scheme Pradhanmantri Jan Arogya Yojana (PMJAY) popularly known as Ayushman Bharat (AB) turns one this month, here is how this is massively different from any other healthcare scheme anywhere in the world.

Globally too, it’s largest ever health assurance scheme anywhere in the world. Medicaid in US of A covered 76 million lives in the year 2016.

2. Speed: Once the government was ready with the blueprint of the scheme, team Ayushman Bharat moved very quickly to ensure the roll out as soon as possible. Within the first year itself, agreement was signed with all states & union territories, except for states of Odisha, Telangana & Delhi. These states have their own political reasons for not allowing the scheme for their people.

Over 100 million e-cards were generated in the first year. More than 4.5 million beneficiaries were treated under the scheme. These numbers speak for themselves. Team Ayushman Bharat has been working tirelessly day & night to ensure scheme is rolled out state after state smoothly & quickly.

3. An entitlement based delivery: Meaning 100% targeted beneficiaries are covered from day one. They do not need to enroll themselves unlike erstwhile Rashtriya Swasthya Bima Yojana- RSBY. In the previous scheme, beneficiary has to go the enrollment center to get themselves enrolled in the scheme. The enrollment window was open for first 3 months of every policy year. The average enrollment was 60–65% (except for some states like Kerala where enrollment ratio was higher). So, a) many beneficiaries got coverage of 9–10 months only b) large number of beneficiaries were not enrolled under the scheme. These were mainly migrant workers, working far from their home town/ state.

Also, beneficiary had to pay Rs 30 as enrollment cost. This too was a factor responsible for low enrollment figures. Compare this with Ayushman Bharat and you will know the difference in the approach of both schemes in delivering the scheme to all targeted beneficiaries.

Doing away of enrollment process was such a huge relief for all- beneficiaries, implementing agencies & government.

4. Cover: Every beneficiary family is entitled for a cover of Rs 5 lakh of hospitalization expenses per year on family floater basis. This is more than fifteen times higher than the UPA Government’s RSBY, which covered expenses up-to a meager Rs 30 thousands. That’s why the hospitalization cases were mostly for cataract, hysterectomy & maternity like smaller procedures. On the other hand, scheme AB will be covering all the major procedures and even critical ailments.

Lower coverage forced government to keep rates for hospitalization packages forcefully & artificially low. This was a reason why quality hospitals & big hospital chains kept away from the RSBY scheme. Ayushman Bharat has kept package rates realistic & close to market rates, while extracting benefit of volume. It also has provision of giving 10% incentive to the hospitals which are accredited by NABH.

6. Ayushman Mitra: Another unique feature of Ayushman Bharat is the appointment of Ayushman Mitra in each em-paneled hospital for smooth & hassle free functioning of the scheme. In rural areas where people face great difficulties in availing even normal services of government, this is a welcome change. Getting hospitalized for any ailment in itself is a traumatic experience for most of us. In that situation, Ayushman Mitras will help beneficiaries availing the benefits of the scheme without worrying for the operational processes. This will keep a check on ground level corruption too.

7. Government hospitals are being encouraged to join the scheme: Thus opening an entirely new revenue generation front for them. Using this extra income, public hospitals can upgrade their infrastructure & services. Over the next few years, if they can ensure smart investment of this fund, public hospitals can upgrade their facilities massively. This may help them divert beneficiaries from private hospitals in coming years, thereby increasing their revenue. Although this revenue is coming from government only, it does not take away the fact that they can utilize the funds for their own good.

9. Advanced IT platform: A state of the art IT system is backbone of the scheme. Beneficiary identification, hospital transaction software is improved massively from what we have seen during RSBY.

Frequent data losses due to poor connectivity and sub standard IT system resulted insurers and hospitals fighting each other over settlement of claims.

10. The PCP factor: Paperless, Cashless & Portable across India. Beneficiary does not need to submit any document in the hospital. All transactions between hospital & implementing agencies are shared electronically, no paper work is required. Beneficiary does not have to pay a single rupee for availing the services of the scheme. Diagnostic tests & post treatment medicines are also made available free of cost to beneficiary making it truly cashless scheme. Portability across India ensures that a beneficiary of Uttar Pradesh can be treated in best hospitals of India.

In coming years, Ayushman Bharat will have most positive impact on Indian people than any other social welfare scheme of any government- present or past. Modi 1.0 was accused for not doing enough for health & education. Modi 2.0 is ensuring that healthcare delivery ecosystem is ready in next 5 years. New medical colleges in over 100 districts, mass vaccination drives, increased sanitation through Swachch Bharat Abhiyan, improved primary & preventive healthcare through health & wellness centers coupled with Ayushman Bharat intervention is creating an entire ecosystem which is making India healthier than ever before.

We can only say, Ayushman Bhavah, Bharat!