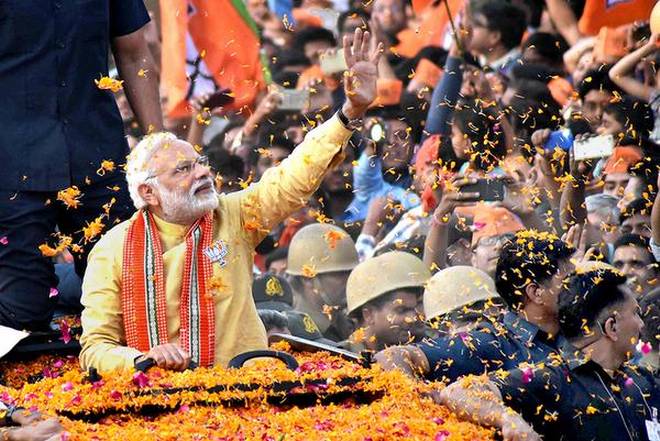 Elections are interesting for every country, and now globally also due to interwoven fabric of globalisation. There is a billion dollar industry of predicting election out comes and results. The most common method used by agencies is exit polls. Post US elections in 2016, Google Trends has emerged as an interesting tool to analyse election trends, throughout the US election year in 2016 Google Trends predicted a victory for Trump based on search trends.

India is also not behind, in the state assembly elections held in last two years Google Trends was on target pointing at potential winners. Let’s look at couple of examples.

From the Google Trends for the period three months before Gujarat assembly elections in 2017, it was evident that Narendra Modi was a much popular leader in Gujarat compared to Rahul Gandhi and the key word BJP was more searched on internet to Congress. The outcome of election was BJP won and formed government in the state.

The sensitivity of Google Trends is visible in the data of three months before Karnataka assembly elections, the key words containing party name searched on the internet suggested first position for BJP, second for Congress and third for JDS. The election results were in line with google trends, ultimately Congress-JDS joined hands and formed government there.

The image of Google Trends for the period three months prior to assembly elections in Rajasthan, MP and Chhattisgarh clearly suggested a Congress wave across the region. The internet search space that BJP dominated, was clearly seen to be lost in the entire central India region, Congress was clearly trending, dominating the political arena. The outcome of the election was completely in favour of Congress with victory in all three states.

The Google Big Data Trends for the period three months prior to my writing this article on 26th April, 2019 clearly suggests a BJP wave across India. Congress is having upper hand only in the states of Andhra Pradesh and Nagaland, rest of the Indian states in blue are suggesting a clear preference for BJP. As leader, Narendra Modi has a clear edge in entire India, excluding states of Manipur, Nagaland, Sikkim, Tamil Nadu and Kerala. The concentration of dark blue colour in states of Uttar Pradesh, Bihar, Odisha, West-Bengal, Gujarat, Maharashtra and Karnataka suggest a clear higher interest towards BJP.

Google Trends uses the method of percentile to rank geographical regions and trends, region having highest searches for a key word out of total internet searches is given rank 1 and multiplied by 100, all other regions are then ranked up in percentile multiplied by 100. The catch here is population, a smaller state having lesser population but higher preference for a keyword can be ranked much ahead in Google Trends. It is important to normalise this data with population to find actual picture.

To do so, we create percentile of Indian states based on population and multiply it with Google Trends data of the same state, the sum of these numbers will give a national Google Trend Impact Score. The present score of BJP for the same is 82296.4 and for Congress it is 56957.2, BJP here is leading by almost 45% margin. Interestingly the same score during the 2018 MP, Rajasthan and Chhattisgarh election was found to be 70720 for BJP and 60272 for Congress pan India. In the three states where elections were held Congress was leading with score of 21100 against 18931 of BJP. The outcome of those results are known to us.

This unique ability of Google Trends Big Data is clearly suggesting a massive interest for BJP in the highly populated states of UP, West-Bengal, Odisha, Jharkhand and Gujarat. The table summarizes state wise Interest for BJP and Congress in populated states. Even states like Kerala and Tamil Nadu, where BJP is not present as of now are demonstrating interest.

Considering the precedence of correlation between Google Trends and election results, we are looking at Modi forming government in 2019 with full majority. The poll results are likely to give unprecedented up rise to BJP’s tally this time. A Modi Tsunami is in making for sure………..the final tally for NDA can be a surprise for many pundits counting on caste and religion politics.