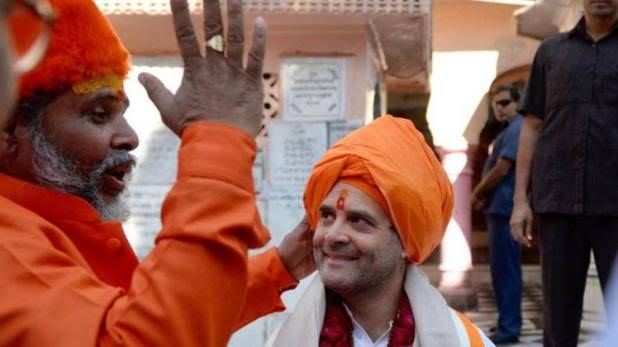 Election is a festival of democracy, but for some leaders it becomes an event in which they could do different practicals with the knowledge they have acquired about India. Congress President Rahul Gandhi this time came with a practical by which he thought that he could appease the Hindu community and gather maximum support in the five state elections and dream 2019.

During his election campaign before the Rajasthan elections, he told about his ‘Gotra‘ to public. This was followed by the Congress president challenging Prime Minister Narendra Modi about his knowledge of Hinduism. Somewhere in all this, the political debate or discourse, if some prefer the pedantic word turned on the issue of the Hindu, and what is Hinduism.

Later Rahul Gandhi, who was campaigning in Rajasthan, worshipped at Pushkar Sarovar and when Rajnath Kaul, the priest asked him about his ‘Gotra’. He told that he belongs to ‘Kaul Dattatreya’. After this controversy, Congress came to rescue him from the tough situation. Congress spokesperson said, “Rahul Gandhi is not just a Hindu but a janeudhari Hindu”.

‘Janeudhari Brahmin‘ a term that has no meaning as Brahmin itself means that one has to be Janeudhari but not the reverse is right. That means all Brahmins are Janeudhari but all Janeudharis are not Brahmins. There are others caste too who wear Janeu.

Elections are over and everyone is waiting for 11 December, when the results are going to be announced. Whatever be the religion of any candidate, it depends on the people, whom they have provided the golden chair. People are aware to each and every tactic which is made by every individual or party.

It is said that when you build your base with lies, you are sure to lose trust. That’s exactly what happened in Rahul Gandhi’s case. There is no issue with being Brahmin or not, following any religion. But one should have a true identity. People look for capability and not your personal faith.