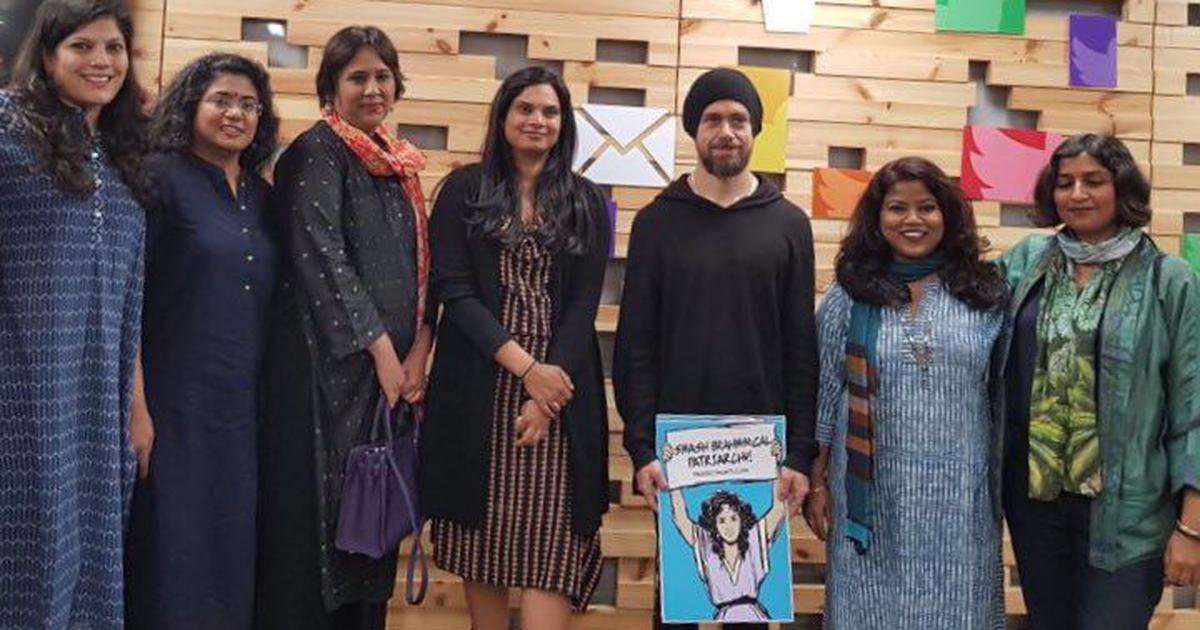 Twitter CEO Jack Dorsey would have never thought that his holiday will spoil like this. Previously too Twitter have been in controversy on various issues related to their unhealthy comments on Indian Culture. Mr Dorsey met a few women journalists in a general conversation talking about the role of Twitter in India. A picture of their meet made way to the public and woke up sentiments of many Indians.

Mr. Dorsey is holding a poster declaring “Smash Brahminical Patriarchy”. As the picture was posted it created a tornado like situation. It was seen as a threat to communal harmony. And it’s also the time of election in five states in the country.

Later on Twitter defended Dorsey in comments posted on its official India page saying a Dalit activist had “shared her personal experiences and gifted a poster to Jack.” And “It is not a statement from Twitter or our CEO, but a tangible reflection of our company’s efforts to see, hear, and understand all sides of important public conversations that happen on our service around the world”. But would Jack hold a Nazi sign in Germany without understanding the full context of it, just because it was gifted by an “activist”? Would Jack also hold the sign telling the story of “Racism” in USA?

Brahmins only constitutes to 5% of the entire population. People reacted that Brahmins lack privileges in India after Independence. Twitter CEO is deliberately spreading hate against the religion. Twitter’s agenda for a long time to endanger Hindus and spread hate against Brahmins. Many were worried that their pro-Hindu content was being deleted by Twitter, which made them believe that it is truly a conspiracy against Brahmins and Hindus. Well can’t say if it is truth here as in the particular case this could be unintentional. It is to be pondered upon that, does really “Smash Brahminical Patriarchy” required? The term ‘patriarchy’ is a Greek word which means ‘rule of the father’ and broadly determines how the world is organized. It was existing in the Vedic era, where the caste of person was decided on the type of work which he was doing. Later its form got transformed and it became related to birth.

With the changing time and progress, the colonial rule and after Independence it has been diluted in all the forms. There was time when it could have been a reality but progressive societies are emerging as a mixed group belonging to various castes and social groups breaking the barriers of any patriarchy.

Progressiveness has changed it’s definition the educated, the rich which ever caste he belongs to. Even in today’s time so called higher caste becomes a hindrance sometimes. Government has provided with reservation to the caste who were most suffered and upper caste do give their positive consent too. Here the argument is not about the reservation but issue is that Is it morally correct to punish every person of a particular community and it is again and again only because their few ancestors were wrong.

It may be true that Brahmins enjoy a privileged position, but they do not control the levers of the economy or power in an overall sense. Look at the who’s who of the central and state Governments – Brahmins are a minority in this. When this is the situation, it is utterly insensitive and malicious to call out the name “Brahminical”, because it so closely lands near the term Brahmin.

The poster could have been saying “stop patriarchy in India”. Any type of heat atmosphere could have been avoided. Indian culture is very versatile and there are various sects and languages and each and every of them has its importance. Spreading hate would only increase the gap among all. It’s us who have to decide what type of people, product or company we would endorse. We have to maintain the delicate fabric of love and unity among all the sections of society.