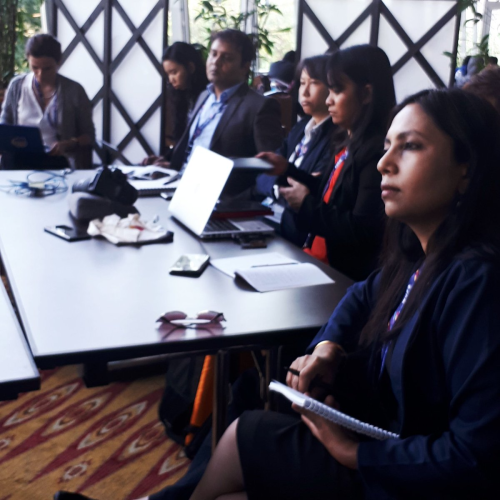 Summary: Solar being her energy future, India (along with France) organized founding International Solar Alliance (ISA) conference in New Delhi on 11 March 2018. By taking lead in creating an international intergovernmental platform for Solar energy, India has shown commitment towards sustainable development and bolstered herself as an advocate of multilateralism as well. However, Solar PV may not be as green as perceived given its potential to generate huge e-waste and complicated disposal system. India must set the agenda for research & manufacturing of the greener Solar PVs.

Traditional energy sources will not be enough to meet the future energy demand of India, even if they do, there will be an environmental cost to it. On the other hand, solar energy is renewable, sustainable and abundant in India. Factors like foreign shipping lines, price fluctuation in the international market, loss of foreign exchange & trade deficit, international geopolitics etc are associated with the import of crude oil & petroleum products. That is not the case with solar energy. Solar is sustainable, renewable and abundant in India. Hence, solar energy is a great option for India’s energy security.

Solar being India’s energy future, Narendra Modi  (Prime Minister of India) had taken the lead in establishing an international intergovernmental platform for solar-energy related issues like technology, efficiency, resources and affordability etc. Narendra Modi and Francois Hollande (then French President) jointly initiated the International Solar Alliance (ISA) on the sidelines of the United Nations’ Paris COP21 conference on 30 November 2015. ISA is an intergovernmental alliance of the nations lying between the Tropics of Cancer and Capricorn (Source –ISA). Today, while the global policy narrative is largely driven by the western world, and China is dominating Asia-scape, India’s leadership in renewable/solar energy is a welcome move.

PM Modi and former French President Hollande had inaugurated the Interim Headquarters of ISA in the campus of National Institute of Solar Energy (NISE), Gurugram, Haryana on 25th January 2016. One year later, the framework of The International Solar Alliance was presented to the member countries for ratifications during the next Conference of Parties (CoP22) in Marrakesh on 15th November 2016. To date, 61 countries including India are the signatories of ISA Framework Agreement (Source –ISA).

Ministry of External Affairs India and France Government jointly organized the one day Founding Conference of the International Solar Alliance (ISA) on 11 March 2018 at Rashtrapati Bhavan Cultural Center, New Delhi, India. The ISA conference will be attended by representatives of more than 100 countries including high representatives from 58 countries, International Organizations like the United Nations, International Banks, Researchers, Civil societies etc.

Narendra Modi (Prime Minister of India), Sushma Swaraj (Minister of External Affairs) India, Emmanuel Macron (President of France) and other dignitaries have addressed in the opening session of the conference. EAM Swaraj said that the goals of Economic growth and sustainable development are not contradictory but are complementary, we must achieve both. She informed the gathering about India’s provision of US$ 27 million to support the ISA cause (EAM’s full statement).

PM Modi cited Vedas, the ancient scriptures of India where Sun is considered as हिरण्यगर्भ, the soul of the universe, the eternal source of energy and life. He stressed the need for the world to harvest solar energy and shift away from fossil fuels to fight climate change. PM Modi reiterated India’s commitment towards SDGs by means of increasingly relying on renewable energy. He informed that India’s goal to produce 175 GW renewable energy including 100 GW solar energy by 2022. To date, India has installed 20 GWh of solar power. PM Modi announced that India has made provision of US$ 62 million for ISA in addition to US$ 27 million mentioned by Swaraj.

Solar Mamas sing We shall overcome during the ISA conference.

Rendering of the We Shall Overcome by Solar Mamas was one of the highlights of ISA conference. Solar Mamas are the women from developing countries who received training under the skill development programme of India into handling and manufacturing of the Solar PVs and equipment. These women are grassroots workers and solar training is contributing to their livelihoods and empowerment.

Today, India houses 18% of the total global population but amounts for only 6% of total global energy consumption with 240 million without access to electricity (International Energy Agency, 2015). However, India’s electricity demand is growing with the economic growth and increasing electrification via schemes like Deendayal Upadhyaya Gram Jyoti Yojana etc. The government of India intends to complete 100% electrification by the end of 2018.

According to Central Electricity Authority, the total Installed power generation capacity of India is 330 GWh as of December 2017 out of which, the share of renewable energy sources (RES) is around 18.2% or 60 GWh. Solar Energy accounts for 20 GWh (PM Modi’s speech). By 2040, India’s population is predicted to grow to 161 Crores which will be highest in the world. The electricity demand is predicted to grow to 1000 GWh (International Energy Agency, 2015, p 55). Augmenting the existing generation capacity to meet the demand 2040 is a mammoth task. It is anticipated that renewables energy along with the nuclear energy will have a major share in meeting the electricity demand of 2040. Thus it will be a step towards sustainable development.

Electricity production from renewable sources is green and the efficiency of Solar PVs has increased substantially over last few years. However, the problem lies with the disposal of the e-waste it generates. Generated electricity is stored in Photovoltaic cells in case of Solar energy. The lifespan of the batteries is argued to be maximum of 20 years. Its material and components need systematic disposal. Materials used for the PV cells include glass, aluminium, copper, lead, plastic, silicon etc.  According to a study by Down to earth, 100 GW solar will generate approximately 7-8 Million Tonne e-waste having toxic materials like lead and recycling process is complicated. Whether the scientific disposal of damaged/used solar PVs can be done in India and if not, where and how this can be done are some of the critical questions.

In conclusion, traditional energy sources will not be enough to meet the future energy demand of India, even if they do, there will be an environmental cost to it. Solar is the energy future of India. By taking lead in creating an international intergovernmental platform for Solar energy, India has also bolstered herself as an advocate of multilateralism. However, Solar PV may not be as green as perceived given its potential to generate huge e-waste. India must set the agenda for research & manufacturing of the eco-friendly Solar PVs with simpler disposal system (of the faulty, damaged or used PVs).