Demonetization has given us a lot of action, starting from crazy political reactions, to numerous rumors, from Kejriwal and AAP’s absurd behavior to, well, Kejriwal and AAP’s absurd behavior. It also ensured that the whole country started talking digital like it had never before, starting from NEFT, credit and debit cards to new in market- M-Wallet, IMPS and UPI. Thanks to such a discourse, we managed to witness cases of technological intellectualism emanating from the eminent citizens who always have an opinion on everything under the sun. These reactions have also been very well documented by Dhaval Patel in a thread.

Apparently she even wrote a book called Breaking News and in there describes her travels through Bharat in search of the elusive Indian voter. Lurching into villages without electricity in UP, to tribal settlements in Jharkand to Baripada in Orissa and Kanchipuram in Tamil Nadu.

The only question it raises is as to why someone who is used to such extensive travelling didn’t take a short trip to Google and try to find the answer for herself.

The next one to ask an enlightening question:

One does figure that being employed in the organised sector, she must have an account in the bank and should have received calls asking for documents to fulfill the KYC norms. Now the only way she is probably saving her face is by asking questions like ‘Who is John Galt’.

Next the senior assistant editor The Hindu, the newspaper which has made it a habit to twist facts:

Yes, I was astonished to see my entire aadhar card replica on Jio salesman’s palmtop, how can govt give them access to our private data? https://t.co/abgxzd9x5u

First, the journalist willingly gave her fingerprint and Aadhar card number to Reliance Jio to get free internet and calls and when the salesman got the replica of the Aadhar card on his device, just like one would give a xerox to a local vendor for mobile sim, she decided to blame the government for it.

This wasn’t the end of her queries, when a good Samaritan decided to address her queries, she heaped newer ones instead. 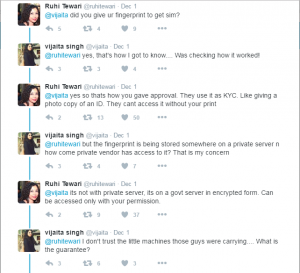 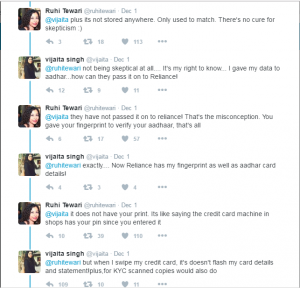 To the last query, yes initially sims were available via the exact same KYC method but it involved filling out a long form, standing in an ATM sized queue and after all that the sim got activated only after 2-3 days. To avoid all that the e-KYC system was brought in.

Next coming to a guy who used to work for India today, also all his tweets are protected which is not a very encouraging sign for transparency and freedom of expression.

Clearly it looks as if he isn’t aware about the Cash Reserve Ratio or the fact that there have always been limits on the number of withdrawals and the amount of withdrawals one can do for a savings account, that is the account normally used by common households.

And finally the tweet of Salil Tripathi. Now he has put Livemint a mainly business news publication in his bio so it might be insinuated that he should know the basics of finance and economics.

Money that comes into banks are deposits = others’ money. If lent at lower interest, depositors suffer. https://t.co/kU70CkGWbu

Well even though it probably doesn’t warrant any commentary, the only way the Banks earn their Daal Roti is via giving out loans at a rate higher than the deposit rate so if banks have a larger amount of cash at their disposal they can cut down on their interest rates thereby compensating the reduction in rates by the increase in volume. Plus there’s nothing charitable in depositing money as one gets interest over it which is a bit better than it lying around at home becoming moth food.

Contributor at OpIndia.com,
Wish to write a great trilogy someday!