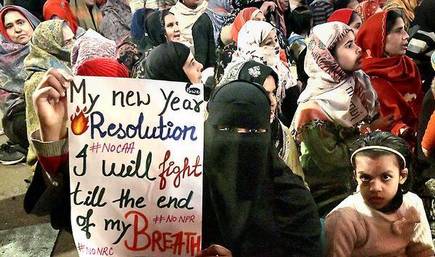 There have been lot of articles on what is going on at Shaheen Bagh. In this article I would like to point out some opinions which people may already have but may have some trouble putting it out on social media.

Shaheen Bagh protest is not a misguided movement to fight for the Constitution or against CAB or NRC. It is a movement to try and establish an Islamic state in India, or an experiment to try and do it. There are many reasons to have this opinion. First of all their so called “war-cry”, “La illahi illah la”, which literally translates to “There is no God but Allah” and how most of the famous protesters justified this war-cry by insinuating that it is a symbol of secularism somehow.

My question is this, what has Allah got to do with our constitution? What has Allah got to do with CAA or NRC? If they were so worried about constitution, regardless of religion and if they were truly secular they would not have made the Islamic prayer as their war-cry. They literally have made a no go zone right here in our capital city where someone who doesn’t support their ideology can’t even enter. We saw this happened to one journalist before and now we saw it happening to Gunja Kapoor.

Republic TV reporter was hounded out. They want publicity, don’t they? Then why they are not letting these people enter? What is going on there that is so secretive that it cannot be freely broadcast? What cause is so important that women are ready to sacrifice their children? Students leaving their routine college and parents being ok with it? Wives leaving homes to sit on protest all day? Yes we could think this is their stupidity and ignore it, which might actually be a possibility too, given the kind of arguments their propagandists make. But what if this is an experiment as in my opinion the prime minister hinted at?

My opinion is we who call ourselves nationalists and Hindus in particular should be vary of this protest and keep an eye on all those who are allowed to enter. They seem to have some dangerous designs and testing the reactions of the country to this. It will be interesting to see what happens to these protests after Delhi election, so that we get to know whether this had a political angle as well.