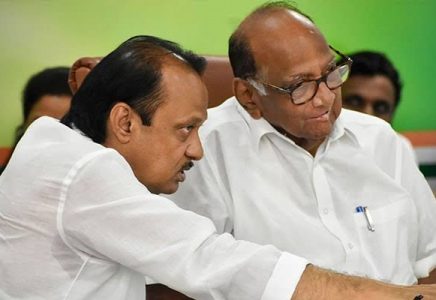 From the beginning ,Sharad Pawar had repeated that he would take a stand on supporting Shiv Sena led government after due consultation with its alliance partner the congress party. Later, Sharad Pawar instead of taking action against Ajit Pawar, accused the Congress party for the decision of Ajit Pawar to split the party because the Congress party was making unreasonable demands in cabinet allocation in Maharashtra government.

In a sense, Sharad Pawar has revealed to the public something that was supposed to have been kept as secret, leaving everything to the imagination of public. But the attempt of Sharad Pawar to dry the undergarment in open nothing but a vicious act of weakening the Congress party and expose how it was in breaking its ideology for power.

The statement of Sharad Pawar clearly suggest that Congress party was not only motivated to stop BJP from coming to power but was eyeing plum portfolios in Maharashtra government. So it was not just breach of ideology but also greed and lust for power. In a sense, Pawar hyped his stature that even when an open invitation was given to him, he did not accept, but both Congress party and Shiv Sena were after power and hence breached both political ideology and mandate of people.

Although from the political per se the NCP cannot expand beyond Maharashtra which Sharad Pawar also knows, but he is trying to offer himself as a leader of change for all those lutyens and so called self-certified intellectuals. Certainly Congress party is extremely demoralized politically, more due to its ex-president-dynast Rahul Gandhi than due to any other reason.

In 2014 several allegations of corruption hit the congress party the worst and it could not face the people and hence sank politically to a bottomless pit of defeat.  In 2019 everyone hoped a better performance from the Congress party but thanks to its dynast leader and his bundle of lies and comedy show, Congress got further demoralized and marginalized politically. But Congress party hasn’t learned its lessons even from its repeated defeats. Still the party want to circle around one pariwar, sing songs and prostrate before the pariwar and wants to resurrect the party.

India is so ashamed of the Congress party for wasting nearly a whole day on the debate over SPG protection to one family. For the Congress party, not the nation but only one family matters but for BJP and Modi government, Indian and Indians are more important than any one particular family or its selfish interests.

Instead of re-building the party, Congress party has chosen a self-defeating and auto-degenerating path by joining with Shiv Sena + NCP game plan. NCP supremo has cleverly exposed both the greed and ideological breach of the congress party and how it had bargained for its support in return.