Rise of EV Ramasamy Naicker and the fall of Tamil Nadu 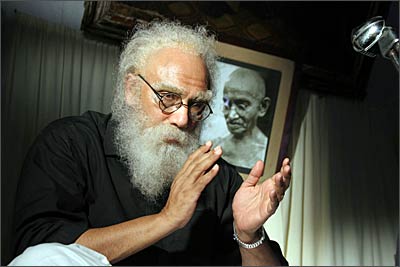 EV Ramasamy Naicker (EVR) is portrayed as ‘above God’ image by his so called disciples and the splinter political party that has established Dravidian dynasty and family rule in Tamil Nadu. But how true was EVR towards Dalit and for the cause of uplifting the downtrodden people is a billion dollar question.

The Book written by M. Venkatesan entitled “EV Ramasamy Naickarin Marupakkam” shows the true viscera and anatomy of EVR’s nefarious politics and politics of hatred and barbarian-ism. EVR is often called as the saviour and messiah of downtrodden people but M Venkatesan, the author of the book, himself was born in a Dalit family and was living in slum area – Hanumanthapuram in Triplicane testifies certain facts to prove how cruel and indifferent was EVR towards Dalit.

“the attempt to promote ‘temple entry’ and ‘abolition of untouchability’ by the Congress leaders should not result in the tragedy of people belonging to the backward classes getting reduced to the level of scheduled castes. Instead of attempting to raise the status of Scheduled Castes (Parayans), an attempt should not be made to reduce the status of backward Class (Sudrans) by relegating them to the levels of Scheduled Castes. On no account should the existing status of Sudrans be reduced to the level of Parayans”.

Venkatesan has further unravelled the other dimensions of EVR to show his hatred for Dalit in his book, i.e., according to EVR, increase in the prices of clothes and textiles were due to:

“’One of the main reasons why there is an upward trend in the prices of clothes and textiles is that women belonging to the Scheduled Castes (Parachies) have started wearing blouses these days. The reason for growing unemployment in society is on account of increasing number of people belonging to Scheduled Castes (Parayans) taking to school education and higher education”.

Can we take the above statements of EVR were meant to uplift the cause of Dalit and downtrodden people or as vivid expressions of caste prejudice and oppressive intent towards Dalit?

Venkatesan further shows how true EVR was towards Tamil language and Tamil literature.  The book reveals that once EVR said

“For more than 40 years, I have been describing Tamil as a barbarous language (Kattumirandi Mozhi) used only by barbarians. When Brahmins and the Brahmin-dominated government wanted to make Hindi a State language, I started, to a very limited extent, advocating the promotion of Tamil language only to oppose the imposition of Hindi language.

The only language that ought to replace Tamil is English.
What is not there in English which can be found in Tamil Language?”

According to EVR, opposing Brahmins was equal to oppose Hindus and vice versa. He believed that Brahmins should be opposed, isolated, excommunicated and persecuted to destroy Hinduism so he has started to divide the people with such venomous thoughts and ideas may be to facilitate Christian conversion and Christian missionaries, who knows.

Like Justice Party how it used the depressed category of people to come to power and then ignored and neglected them and established upper caste non-Brahmin rule, EVR also used Brahmin and Hindu hatred to catapult his social relevance and importance. If his intentions were true, way back in 1967 when DMK came to power, EVR should have demanded the DMK government in 1967 to classify and notify all Tamil people to be one caste and henceforth the reservation would be purely based on economic status. But neither EVR nor DMK were true and sincere. Instead, DMK used the caste formula to win elections and divided different communities.

If Tamil Nadu has to prosper and develop, the state must defeat hate politics of DMK and must invite the politics of development and sab ka vikas of the Prime Minister Narendra Modi. He is engaged in positive politics; oppose corruption, nepotism and dynastic, family rule.  Future of Tamil Nadu lies in the hands of all those first time voters, people who want New Tamil Nadu, a Tamil Nadu that is part and parcel of One India ethos and also in the hands of God believers.