More
Home Opinions Look at the agenda of DMK for the state
Opinions
Updated: 19 November 2019

Look at the agenda of DMK for the state 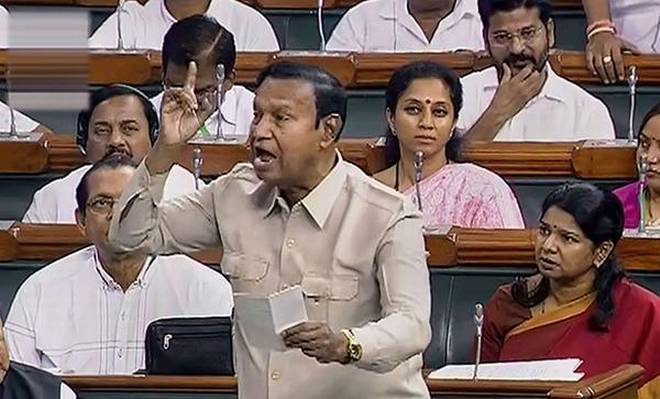 The winter session of parliament has begun yesterday (November 18 2019). On the very first day the issue raised by TR Balu of DMK in the parliament is quite interesting. DMK won a landslide victory in the last parliament election thanks to their well-organized politics of lies and negativity and minority appeasement. 38/39 parliamentary seats DMK combine won. But the issue DMK thought to be of utmost importance to the state is detention of Farooq Abdullah. No one would say anything wrong in DMK raising such issue. But DMK often claim that they exist for the rights of the state and its development and from that perspective what DMK has achieved after winning 38/39 MPs, to the state?

The time taken and the enthusiasm and energy shown by TR Balu in debating the detention of Farooq Abdullah in parliament, the people of TN must note down carefully and must see what are the other issues of TN DMK is going to raise in this session of the parliament.

DMK should have taken additional responsibility and become the extension of AIADMK government in the parliament barring petty politics to raise issues of importance of TN.

After winning 38 parliament seats, what DMK has done the state, how much fund they have brought, what new development scheme DMK has rolled down in the state, all these questions people of TN must ask the DMK. By constantly engaging in negative and lie politics, DMK can only diminish the state and cannot develop. People elect their MPs to participate in the parliamentary debate and urge the central government to support the state in developing it further where several frontiers of development projects the state alone cannot do and it need the support and approval of the central government. But look at the mission of DMK in parliament? It looks like DMK is only interested in politics and raise issues that would further its cause of minority appeasement and vote bank politics and nothing good for the state.

The forthcoming local body election is a good opportunity for people of the state. By being party to the false narratives of DMK if they elect DMK in the local bodies when the state is under AIADMK rule and centre by Modi, people would be doing nothing but are wasting their mandate. If AIADMK alliance is elected to power in the local body election, certainly that would do good to the state instead of electing DMK. Certainly to win again in next assembly election, the present government will do everything possible to address all the problems of people though the respective local bodies if people elect AIADMK alliance than DMK.

Continuity of governance and solution to the problems of people in the state can be achieved easily if people elect the local body members from the ruling party and also the party that is in friendly relationship with centre.

Look at the scenario in Maharashtra. If people of Maharashtra had elected BJP with majority, today the richest state in India would have a stable government led by Fadnavis but the electorate was fractured and hence Shiv Sena wants to fulfill its family ambition and therefore even ready to align with congress and NCP.

People would accept politics by the political party only until election result is out. From thereon people want the elected representatives to behave responsibly and engage in constructive discussions and welfare of the state. DMK should have told openly that since AIADMK could not win parliament election and despite the state is being ruled by AIADMK, still DMK wants to assume the responsibility of an extension of the ruling front in addressing the issues of the state than as operating as mere opposition, banking on divisive agenda and anti-Modi rhetoric.

People of the state must watch and study the list of issues raised by DMK MP’s in Parliament and how true they are in raising the issues specific to the state or are engaged in the larger political interest and agenda of DMK.

EPS and PM Modi are focusing on sab ka vikas and not playing narrow politics to promote dynasty culture. Therefor the state must evict dynastic politics from the state because dynasty is the birth place of corruption, nepotism and sycophancy. Hope the people will elect BJP+ to save the state from family politics.