Yes absolutely. Election 2019, made an important stand. Rahul Gandhi will never be the PM of India. As we backtrack Rahul Gandhi’s steps, we see how his personality transmutates over time. Since he joined politics in 2004, we mostly see him in his angry epitome. His arrest in 2011 stands for that. Among all these he had failed to revive Congress’s Youth organizations. Post 2014 election, we again observe a stark change. He returned back as an emotional and a humble politician. Slowly we started seeing him lesser and lesser. His comments against Modi had become more individualistic. At this point of time Congress was starting to lose over West Bengal and other major states.

Also during this time, Modi’s Hindutva machinery was at its peak. Stuck in between 2017-18, we see revival of the bold epitome of Rahul Gandhi. Desperate to stand against, BJP think-tank RSS he started indulging in religious politics. During this time he catered to a new social media team under Divya Spanda that envisioned Rahul Gandhi as a fierce and articulate leader. He made 121 domestic trips, 27 temple visits in Gujarat. Soon he became infamous as “Janeudhari Hindu Brahmin.” However perhaps his efforts were too late, Modi had already spun up his “Hindu Bahini” as Yogi Adityanath had quoted. That army raged politically charged warfare throughout the nation, a brilliant and effective strategy. Congress had no counter narrative to this.

Rahul Gandhi’s relentless attack on Modi, started pushing him to marginalized controversies. He chose to push forward old political faces as MPs like Ashok Gehlot, Kamal Nath, etc where he clearly had young minds waiting to unleash as Milind Deora. Modi sold his ideas over Make in India and Vikas, to which NYAY was introduced a bit late. Congress had failed to stitch the Alliances between the oppositions that was key to fight BJP led era. BJP’s humongous success stands on a number of pillars. One being the propaganda. In counter, Rahul Gandhi came up with “Chowkidar Chor Hain” (Watchman is the thief) which was not strong enough to withstand Modi’s ingenious slogans as “Beti Bachao, Beti Padhao” (Save daughters, Educate daughters).

At present, Congress has no strategy, neither it has a functioning machinery to turn that strategy into a closely knit story, just as BJP did along with RSS. Just as BSP did, uniting all Dalits. Perhaps Congress has still not figured out who they are. The intelligentsia who used to flock around Congress is thinning down. As I go through the comments on each article, it is clear that the majority of people have found their Home in BJP. In such circumstances Rahul Gandhi is no longer a part of their conscience. 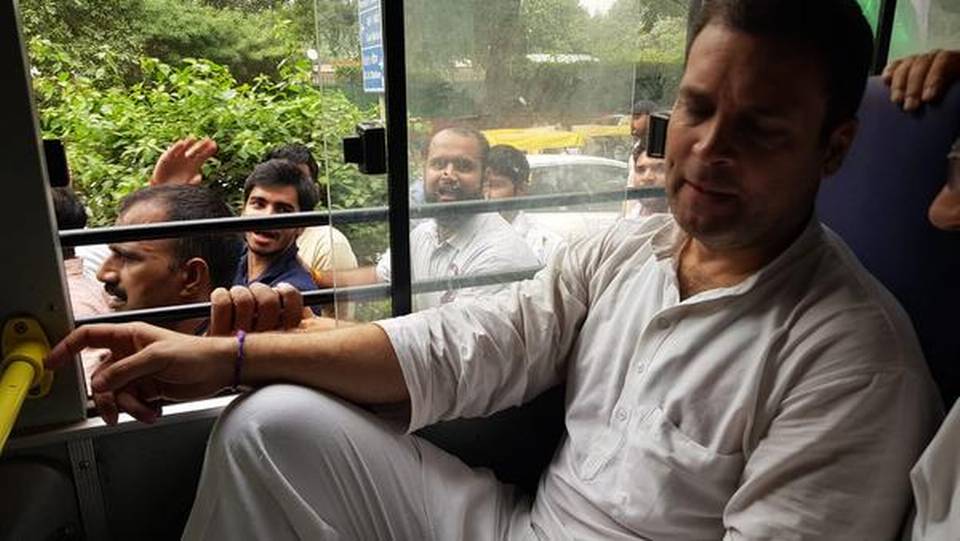 Congress president Rahul Gandhi on his way to the police station after courting arrest during a protest against CBI director Alok Verma’s removal on October 26, 2018. | Photo Credit: Special Arrangement

Almost more than 2/3rd of Indian population don’t want Rahul. They are happy with their ego being buttered by nationalistic and religious politics. They are happy to fight for beef ban, over providing for basic food that India’s 73 million poverty seek. Then, so be it.

We are in dire need of a strong opposition. With BJP winning about 303 seats on its own and 350 with NDA, the requirement of 2/3rd  majority seats in Parliament has already been nullified. Maybe Rahul Gandhi is not robust enough to suffice for that. Congress needs an ‘ideological overhaul’, someone who is not from Gandhi family, because the repetitive attacks against Rahul Gandhi for being born to a Gandhi family, makes Modi look stronger. Especially him hailing from OBC took a huge toll over 2014 Election. That reasoning lies obsolete in 2019, yet remnants of that image remain.

Rahul Gandhi is an emotionally driven politician. In 2024, there will be no place for emotions, when we stand against a brilliant institution as BJP. Rahul Gandhi, you are a nice person, I will miss you, and also, a break up or a political loss, both will hurt for sometime. Souptik Datta is a student, a photojournalist, and a storyteller, who believes in bringing truth to people through new media, often in long form. He is interested in issues related to human rights, politics and the environment. When not working or studying, he likes solo-traveling.