Two-bit historians and their displays of stellar ‘scholarship’

Current example: Sri Ashish Joshi, Indian Civil Servant – who operates the twitter handle @acjoshi. (it is kind of hard to imagine that the gent alleges that he has actually ‘studied’ History ages back and claims that he continues to do history. His Story, that is! But then, he likely follows the illustrious schools of fishy/’curated’ history propagated by the erudite RS Sharmas, Romila Thapars, Irfan Habibs, Harbans Mukhiyas, Athar Alis, Suraj Bhans and DN Jhas… …kind of Twistorians)

Possible excuse: ‘My webpage Admin did that copy-paste’ – it is his act, not mine; so, I cannot be blamed! (if you continue to blame me, then I will use Section 295A and foist a case on you, mind you, I am powerfool!)

Current crisis: ‘TrueIndology’ has already confronted the duplicity of Sri Ashish Joshi, with fine aplomb, based on concrete evidence/sources and sane/balanced interpretation of facts. And, Sir Ashish Joshi responded with stellar balance (*gasp*). Thanks. Opindia has the details here.

Possible excuse for the crimes (yet again): ‘YOU are a hindutva hate monger and have a divisive mentality!’ (oh my!)

Now this is what the gent wrote on 16th April, 2018 on his blog, a fantastic piece of scholarship and pointing-out of facts, I agree. (Screenshot below)

And this was what was written by one Sanjana Ray (based on a talk given by Ram Punyani) on 29th November, 2017. (screenshot below – this is from the thequint.in, a web tabloid) When you desultorily compare the above two screen shots, something of a beautiful ‘surprise coincidence‘ appears, or looms large rather, yeah?

Or is it a surprise? The scholarly liberal civil servant, the bureaucratic upholder of ‘Satyameva Jayate,’ by virtue of his cushy babudom, namely Sri Ashish Joshi has taken the matter from thequint very liberally, word-for-word and has published it as his OWN. No citations or references whatsoever.

Brilliant, I must admit. No surgical strike that anyone can dream of, can come anywhere close to this, of course!

That, this illustrious halfbaker Ram Punyani’s ideas are all cutely bunkum is another matter, which is also dealt with in detail, in the context of the Babu’s fine ‘facts’ further down this post.

FACT #1: Sri Ashish Joshi is an unrepentant plagiarist and is a habitual/repeat/serial offender. And, he displays no signs of expressing remorse or even correcting himself. (But then, why should he? Aren’t they the noble qualities of a liberal intellectual?)

Now let us look at a few specifics (am not handling all misinformation in the aforesaid articles, mind you! I have other things to do than spend my efforts wasting them on wastrel historians like Sri Ashish Joshi) of what he has coolly plagiarized & regurgitated.

“Shivaji’s mighty defeat of the giant pathan Afzal Khan is interesting. Shivaji was going to meet Khan without any weapons, but his bodyguard persuaded him to carry the famous ‘iron claws’ which came in handy when Khan attacked. The bodyguard in question? Rustam Zawan – a Muslim man. “

At the time of Afzal Khan affair, Shivaji had ten bodyguards. The original source ‘Sri Shivbharat’ that was composed in Sanskrit by ‘Kavindra’ Parmanand Nevaskar (a biography commissioned by Shivaji himself and later verified by him, for correctness) of Poladpur, who was a court poet of Shivaji enumerates all the names of the ten body guards at that time. 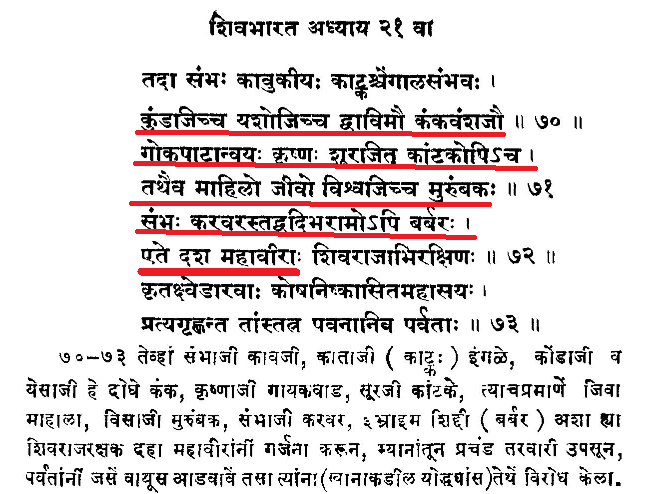 Of the ten, there was only one mussalman bodyguard – Siddhi Ibrahim Khan ‘Barbar.’ There was NO ONE by name ‘Rustam Zawan!’ The plagiarist Babu and his source have a nice imagination, what else!

Again, NOBODY ‘persuaded’ Shivaji to take his ‘bagh nakh’ or tiger claws – but he wore it along with a steel helmet inside his turban and a body armour inside his shirt. (but it was true that he received enough hints about the real intentions of Afzal Khan – evidence for this source, points actually to Krishnaji Bhaskar Kulkarni)

Shivaji responded to Afzal Khan. He did NOT kill him. Of course he inflicted grievous injuries on the Khan.

Both Shivaji and Khan (they were supposed to be unarmed, but both were armed) had brought ten bodyguards each – and two of each group were stationed closer to the tent in which the talks were supposed to take place.

Subsequent to the bloody scuffle initiated by the Khan and responded to suitably by Shivaji with his bagh nakh and bichchwa, wounded Afzal Khan’s bearers tried to take him away – and a bodyguard (Sayyid Banda) of the Khan attacked Shivaji. Then one of the nearer two bodyguards of Shivaji – Jiva Mahala made a short work of Banda and dispatched him.

Again – the bearers and Afzal Khan were engaged by the other nearer bodyguard Sambhaji Kavji, who promptly dispatched Afzal Khan too. Good riddance.

And, Krishnaji Bhaskar Kulkarni, was ONLY a SECRETARY/CLERK to Afzal Khan and the latter used the former to talk to and negotiate with his Hindu foes. Krishnaji was NOT a soldier; also he was the one who first hinted at the possibility of Afzal Khan’s intentions, when he was negotiating with Shivaji on behalf of Afzal Khan.

Now from where does the illustrious faker of knowledge (Ram Punyani in this case) and his plagiarist cousin Sri Ashish Joshi get the idea that “Krishnaji Bhaskar Kulkarni, a Hindu, tried to kill Shivaji to avenge his masters death” –  one really wonders about the intellectual caliber of these classy entertainers and writers of hysterical whodunits, oh what to do…

Surely, the weed that they continue to smoke must be damn powerful.

FACT #2: ‘History’ as peddled by the fakers and the plagiarists are at best, pure FICTION.

In any case, I challenge the Brave Babu Sri Ashish Joshi and the Twistory Peddler Ram Punyani to give even ONE primary source evidence that establishes their dastardly and matlabi spin.

I have this nagging question, almost always, when I encounter these kinds of dishonesty and unethical behavior by public intellectuals and prominent figures: How can any self-respecting person peddle dastardly lies, and then strut about like a virile peacock and posture – and to top it, ‘virtue signal?’

Oh well. Time to get back to my Gita.