This is how we can use truth to peddle lies: Alt News and NDTV way

The short answer is we can learn that from Alt News and NDTV. But we are getting ahead of ourselves. Let’s take a step back.

It may sound even a bit a philosophical, and to some extent it is. Like many other philosophical questions, its discussion can be traced back to the Mahabharat. When Dronacharya asked Yuddhisthira whether Aswathama was dead or not he replied: Aswathama Hatha, Iti Narova KunjaRova

“Yes Aswathhama is dead (and then he murmured). I don’t know if its a man or an Elephant.” The murmurs could not be heard in the loud noise of the trumpet being blown on the instructions of Krishna. Strictly speaking, Yuddhisthira did not lie but can his statement really be said to be true?

Alt News claimed to have fact-checked a photograph of the RSS workers helping the flood-victims in Kerala. In reality, they are using truth (rather half-truth) to spread lies. They basically say that “Official RSS page shares old image as Seva Bharati workers working in Kerala flood relief”. The sentence has not only missing a determiner (before “old”) but the determination to tell the complete truth. Nowhere in the article, they have even given any indication that the relief work by RSS is actually happening. Many readers may be left with the impression that actually that RSS is claiming for a credit where none is deserved.

I must clarify that in no way I’m comparing Yuddhisthira and Alt News. Alt News and its co-founders have been caught lying on more than one occasion. Yudhishthira, on the other hand, was making an exception. This is not the only way in which truth can be used spread lies. There is this other tool of deliberate omission. Take NDTV’s attitude towards a news in which ANI shares a news where RSS and CPI(M) workers are carrying out rescue and relief operations. Rahul Roushan has exposed the selectivity of NDTV on twitter. 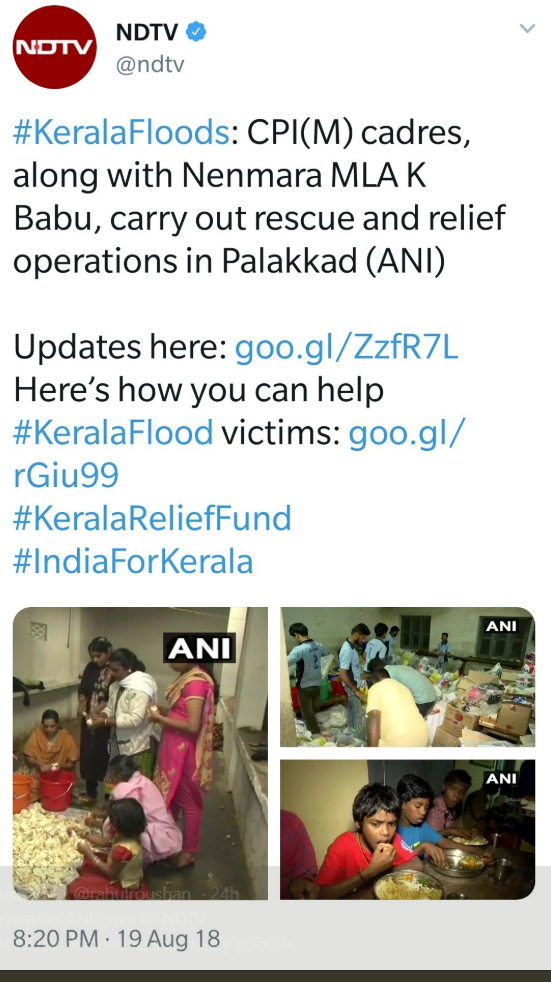 NDTV’s selective reporting to back the CPI(M)

What is really sad in all of this is that people are doing their politics over the pain and death of people of Kerala. Our efforts are being wasted in countering the narrative filled with half-truth and lies instead of using 100% mental bandwidth to help those who are in need. But then “Quis custodiet ipsos custodes?”.  Who will guard the guards?