Since yesterday rumours have been going around about a possible salt shortage in the country which triggered panic buying in many parts of the country.

There were also instances of people spreading the rumor on Twitter who later deleted their tweets.

This news was quickly denied by the Government but the rumors gained such a traction that our MOS Commerce and Industry Ms Nirmala Sitharaman herself had to step in to quash all the rumors.

Soon media houses also started appealing to the masses to stay calm and not panic over the rumors.

Though in what might be a classic case of living under a rock, this was reported by NDTV today morning. 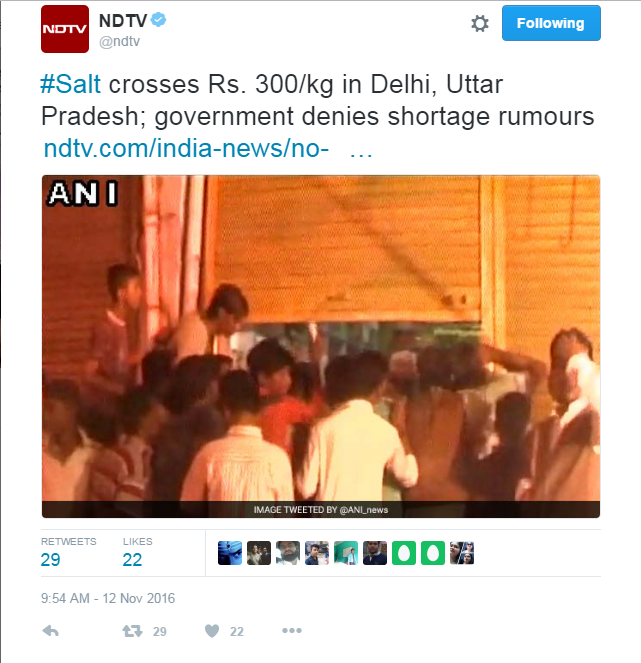 NDTV headline putting up a rumour as fact.

For an average NDTV reader, the headline suggests that salt has indeed crossed Rs. 300/Kg in Delhi owing to the salt shortage, and people need to brace themselves to pay 15-20 times what they normally would for a Kg of salt.

But when one looks at the content of the article, nowhere such a direct claim was made and there were only two quotes in the article which contained any reference to pricing. The quotes being:

The clarification came after rumors were rife that the price of salt has gone up to Rs. 250 per kg in Delhi/NCR and Rs. 400 per kg in Uttar Pradesh.

In some areas salt was said to be selling, if available, anywhere between Rs. 100-200 per kg.

So there was a direct assertion of the price of the commodity in the headline that implied a shortage, but all that changed to indirect speculation when it came to the content.

Should NDTV, being a big media house with a large reader base, not have cared to be responsible while drafting the headline? Many people could just read the headline and conclude that salt indeed was selling at 300 rupees, whereas in reality it was just a rumour.

This report comes in the light of the Mumbai Police’s tweet that promising strict action against whosoever was found spreading such rumours.

But obviously, if Mumbai Police acts against NDTV, it will be undeclared emergency.

Contributor at OpIndia.com,
Wish to write a great trilogy someday!